Budget surplus is the opposite of a budget deficit, and when entries equal outflows, the budget is said to be stable.

Important terms that related to UK budget deficit are;

During the time period of the years 2007 to 2009 was very important for the United Kingdome the main reasons are followed for the financial crisis in UK.

In UK the values of the real esate part was continuously rising. Besides that, the loaning terms and conditions were very large and also the rate of interest on mortgages was low. So mostly people use that mortgages for savings in real estate sector. Financial institutions were began to offer sub-prime mortages. Sub-prime means to offer money to unable borrowers. The results of this building industry was also in boom and they were modifing and exponding their workers and machinery. They also took away the loans for changes. All of sudden the real astate sector distorted the financial institutions came in difficulty.

The banks lended and give extra amount that had. Only the HSBC bank presented fewer loans. When the credits disaster rises, all banks were successively out of liquid reserves. No one of them are ready to helping each other bacause they did not have trust when they are all were facing problem.

UK is calling service center of world. The service industry of UK includes insurance and banking. So there is hesitation in it that the credit disaster happened in US directly affected to the foreign trade of UK. On the other hand, the imports of UK remain same because most of UK imports include basic necessities, automobile etc. As a results of this account of current showed deficit or there was also a loud decrease in it.

– The major changes in the bank reform

Banks in the UK need to raise their capital to £25 billion. However, most of the banks are suffering from the credit crunch. They will need to ask these funds from the UK government.

One other possibility is by exchanging their preference shares to increase funds.

The Bank of England will provide £100 billion in fund by exchanging the preference shares.

The bank of England will provide £250 bn at every low rate i.e. commercial rate.

It should be noted that all bailout seeker banks should have to do on agreement with FSA regarding their executive pays, bonus and dividend.

Following is the bailout plan for the UK banks is prepared by the government of UK.

The government should control the inflation rate to avoid any recurrence of the 2008 credit crisis, where the banks lent more money with the decreased rate of interest sanctioned by the government.

The government can also cut its public spending to reduce the fiscal deficit. For example, in 1990, Canada reduced its public spending significantly by assessing the different departments in the government and cut spending by 20%. The Canadian economy continued to grow during this period of spending cuts and further helped reduce the budget deficit. However, during this policy, the Canadian economy helped from low low rates to improvement spending, a weaker exchange rate and higher distributes to the US. The strong the economy made, the easier to cut spending.

Other evaluation of cutting government spending depends on the type of government you cut. If you cut pension spending (eg. making people work longer) then there will be a real increase in creative capacity. If you placed public sector investment, it will have a better opposing result on total demand and the source side of the economy. So, the offer is for the government to cut pension and benefits as this can decrease spending with a smaller amount of power on economic growth but it will be at the total of increased variation in people.

With a higher tax, the government can gain an increase in revenue which will further reduce the budget deficit. However, this can cause consumers to spend less and cause a decrease in economic growth.

This again, depends on the tax increases of the timing. In a downturn, tax increases could effect a big drop in spending. During the high growth, tax rise won’t harm spending as much. 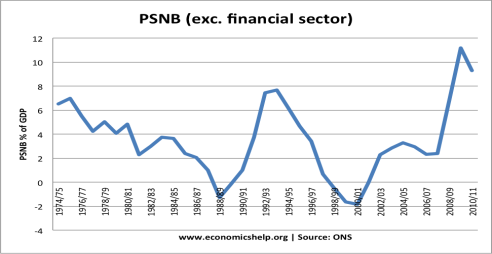