The purpose of this chapter is to introduce the neo classical theoretical framework which is the basic foundation for the convergence theorem of economic growth. Further, we will see the other major theorems studying growth convergence.

“The art of successful theorizing is to make the inevitable simplifying assumptions in such a way that the final results are not very sensitive…and it is important that crucial assumptions are reasonably realistic” (Solow,1956)

The Solow-Swan model, as it is alternatively called is explained in the following 10 equations as done in Barro, Sala-i-Martin(1999)

We start by assuming a simplified, Robinson Crusoe type economy where producer and consumer are the same person who owns the inputs as well as the technology to transform inputs to output. The inputs are broadly classified into physical capital, K(t), and labour, L(t). Let`s also assume technology has no or little change over time.

The production function, thus derived, will be of the following form

where Y(t) is output at time period t. We further assume a one-sector production model in which output Y(t) is a homogenous good which can either be used for consumption ,C(t), or for Investment I(t) to create new units of Physical Capital K(t). The Capital depreciates at the constant rate δ > 0 We also assume that the economy is closed which implies the output equals income and saving equals investment in all periods, t. Further, we assume a constant, positive savings rate s(). Hence, the net increase in physical capital at a point in time equals gross investment less depreciation

where á¸° is net increase in capital and 0 ≤ s ≤ 1. Equation 2 determines the dynamics of physical capital K for a given level of labour force L. The labour force L(t) varies in accordance with the population growth, worker participation rates and time worked by an average worker. For the simplicity of the model, we assume that population grows at a constant, exogenous rate, Ä¹/L = n ≥ 0 and that everyone works at same intensity. If the number of people is normalized at time 0 to 1 and the work intensity per person is normalized to 1, then the population and labour force at time t equal to

If L(t) is given from equation 3 and technological progress is absent, then equation 2 determines the time paths of capital, K, and output,Y. Hence the production function becomes

A production function is neo-classical if it satisfies the following three properties.

Satisfaction of Inada conditions imply that

Now we analyse the dynamic behaviour of the economy described by the neo-classical production function.

We recall equation 2. if we divide both sides of the equations by L ;

while the left side is not. Hence we rewrite á¸°/L as a function of

by using the condition

if we substitute this result to the expression 9, and rearrange terms to get

in the right hand side implies the capital labour ratio,

,over time. The term

is the effective depreciation rate of

Given a constant saving/investment rate, a decline in capital labour ratio will happen either because of a growth in labour force (denominator value increases) implied by

or because of a fall in capital stock (numerator value decreases) owing to depreciation, denoted by

Equation 10 is depicted in the diagram given below. The upper curve,

, is the production function in per capita terms. The curve starts from origin since each input is essential for production (Inada Conditions). It gets flatter as

rises due to the diminishing marginal returns to capital. The lower curve,

, represents savings/investment in per capita terms. It starts from origin because

, it has a positive slope since the marginal productivity of capital is positive (

The final term in the equation,

will form a straight line with positive slope due to the assumed constancy of labour force growth and depreciation of physical capital. 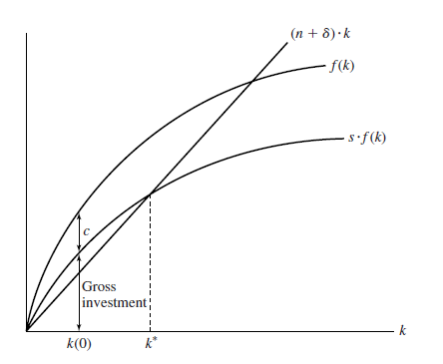 curve at that point. The Per capita investment equals the height of

. The vertical distance between

line shows the change in the capital labour ratio,

), all the important variables in the solow-swan growth equation grows at constant rates.

It is the point corresponding to

In the above diagram this point is denoted by k*. Since

A technological progress, ceteris paribus, will shift the production function

upwards and a proportionate shift in

will follow, leading to a higher steady state level of k*. An increase in

will lead to an upward shift in

curve, and with a given production function, this will lead to a higher k*. similarly, an increase in population growth rate or capital depreciation rate will lead to a lower steady state capital labour ratio, k* . However, none of these will lead to a change in per capita growth rates of Y,C or K all of which are equal to Zero. For this reason, the current model does not explain the determinants of the long run per capita growth. Since, according to this model the long run growth rate is entirely determined by exogenous factors, the neoclassical model is also called an exogenous growth model.

In order to understand the idea of convergence, let`s go back to the fundamental growth equation of the Solow-Swan model.

Dividing both sides of the equation by k ;

is the growth rate of

is equal to the marginal product of labour which is positive. Hence, the derivative

will be negative and if plotted in a diagram, will form a downward sloping curve. The second term in the right side of equation will be a positive constant (since we assume

to be positive constants)

Equation 11 is depicted below diagram 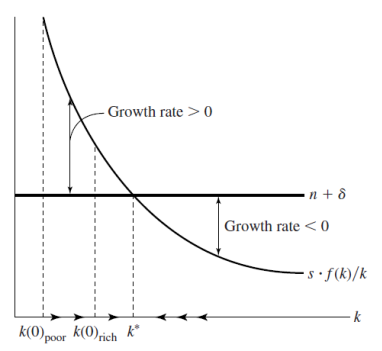 A noteworthy point here is that the capital-labour substitution process will be faster in poorer countries. This implicitly means that poorer countries have a more labour intensive production process than their richer counterparts. And as the economy grows, the growth rate of capital-labour substitution process falls and in steady state this growth rate is equal to zero. The source of this result is the neo classical assumption of diminishing marginal returns to capital. When k is relatively low, the average product of capital,

, and hence the investment per unit of capital,

The behaviour of output

In order to study the behaviour output along the convergence process we first define the growth rate of per capita output;

The expression in brackets is called the capital share or the share of rental income on capital in total income. The above equation shows that the relation between

on the basis of the behaviour of capital share.

Now we substitute from Equation 11 for

and we will get

Differentiating equation 15 with respect to

Since the capital share is always a positive fraction of the total output, [

], the last term in the right side of the equation is negative. If

, then the first term on the right-hand side is non positive and hence

rises (and therefore as

rises) in the region in which

, ie., k ≤ k*. this simply means that the growth rate of per capita income falls (though the PCI still rises) as the economy become more capital intensive. This way the growth convergence is proved.

The hypothesis that poor economies tend to grow faster per capita than rich ones-without conditioning on any other characteristics of the economies-is referred to as absolute convergence (Barro, Sala-i-Martin, 1999)

In the diagram below, we consider two economies with different initial stocks of capital per person,

as well as initial saving rates. Here, the absolute convergence hypothesis would predict the poor economy to grow faster than the rich. In the diagram, this would mean a larger distance between

line for the poor country. But this is not true. Here, the rich country would register a higher growth rate in per capita output. This happens because the rich economy has a higher saving rate, and it is possible that

is further away from its steady state level,

from its steady state, 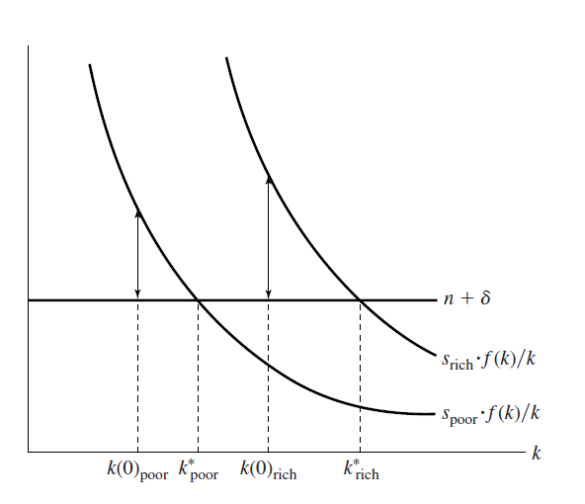 The neoclassical theory of growth does predict that each economy converges to its own steady state and the speed of convergence relates inversely to the distance from the steady state. In other words, the model predicts conditional convergence in the sense that a lower starting value of real per capita income tends to generate a higher per capita growth rate, once we control for the determinants of the steady state.

As of now we have assumed that the technology has been constant over time. But this is not true. In fact technology is the most dynamic source of economic progress in an economy. Hence, assuming it to be constant will be an over simplification of the reality. So, we are endogenizing the technology into the model.

There are three methods of doing this. We have to decide whether the technology should be Hicks Neutral, Harrod Neutral or Solow Neutral.

Barro, Sala-i-Martin finds out that only the harrod neutral technical progress, which is labour augmenting, will be consistent with the existence of a steady state, assuming that the technical progress happens in constant rates.

This means the production function takes the form

Where A(t) ≥ 0 is the index of technology. Let`s assume that technology grows at a constant rate, x. The condition for the change in capital stock is

Dividing both sides by L to get

Dividing both sides by k

are constant, and the constant returns to scale assumption has to be maintained, the average product will remain constant only if the capital labour ratio grows at the same pace of the growth rate of technology, i.e., x.

The behaviour of Output

In order to understand the behaviour of output once endogenous technology is incorporated, we first rewrite the production function in per capita terms

In the above expression, since both k and A(t) grows at the rate, x, per capita output, y, also grows at the same rate. This means that Consumption [

is called the effective amount of labour.

If we rewrite the production function in the intensive form using

and proceed to write the expression for the growth rate of capital per unit of effective labour,

The capital per effective labour depreciates at the rate

. If the saving rate was zero, then

will decline partly due to depreciation

and partly due to the growth of effective labour force,

The steady state in this economy will satisfy the following condition

This expression is depicted in the below diagram 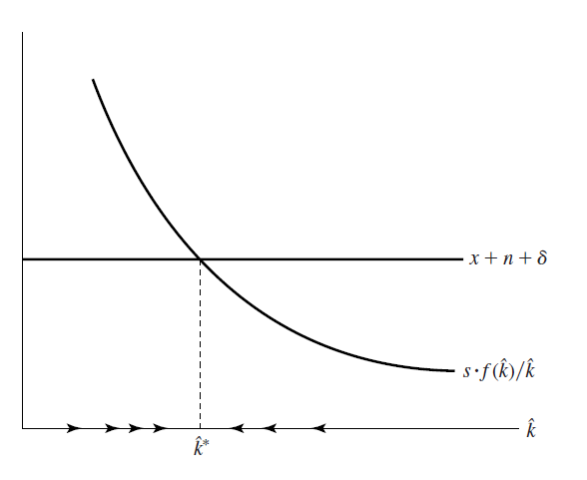 are constant at steady state. There for the per capita variables

grow at the exogenous growth rate of technology, x. The level variables

grow accordingly in the steady state at the rate

. However, shifts in the saving rate or the level of production function will not affect the steady state growth rates. These kinds of changes will influence growth rates only during the transition from

A quantitative assessment of the speed of convergence in a cobb-Douglas production function is given in Barro, Sala-i-Martin 1999.

in a Cobb-Douglas model will be of the form

A log-linear approximation of the above equation in the neighbourhood of the steady state:

The coefficient β determines the speed of convergence from

For a cobb-Douglas Production Function,

If we substitute these formulas to Eqn. 21

Here, the first two terms in the right hand side [

] is nothing but the

coefficient in the capital growth equation 22. Therefore, the output per worker,

This also implies that the saving rate, s, will not affect the speed of convergence,

. This is because of the fact that, for a given

, the speed which a greater saving/investment rate brings will be offset by a lowered average product of capital due to the higher steady state capital intensity,

, and this effect will reduce the speed of convergence.

To export a reference to this article please select a referencing stye below:

If you are the original writer of this essay and no longer wish to have your work published on UKEssays.com then please:

Our academic writing and marking services can help you!

Study for free with our range of university lectures!

Looking for a flexible role?