Public Expenditure On Education In India

There are primarily three sources of financing the education in India i.e. financing through central government, state government and non-government sector (including parents, non-government organizations, banks, philanthropic contributions and as a part of corporate social responsibility activities amongst others). Government is expected to shoulder greater responsibility in providing for education due to the social returns associated with education. The central and state financing is further bifurcated in Revenue account and capital account and Plan and Non-plan expenditure. Expenditures on capital account are long-term in nature. They are used for acquiring fixed assets such as land, building, machinery and equipment. Other items that also fall under this category include loans and advances sanctioned by the Centre to the State governments, union territories and public sector undertakings. However, expenditures incurred for the routine functioning of the government departments and various other services, largely not associated with acquisition of assets such as subsidies, salaries, interest, etc. incurred by the government are referred to as revenue expenditure. Plan expenditure refers to the expenditure devoted towards the funding of the plans by the government. On the other hand, non-plan expenditure refers to the expenditures other than those devoted for the plans of government. Plan and non-plan expenditure are incurred on capital and revenue accounts.

The objective of this paper is to analyze in detail the contributions made by the Centre and the State governments towards expenditure on education in 2005-06 and 2010-11 and observe the changes thereby. The selected years were chosen due to the availability of comparable data. Data for actual expenditure, revised estimates of budgeted expenditure and budgeted estimates were available, but for the purpose of analysis the data related to actual expenditure incurred was only considered. Henceforth State would refer to State and Union territories combine,

CAPITAL AND REVENUE EXPENDITURE ON EDUCATION 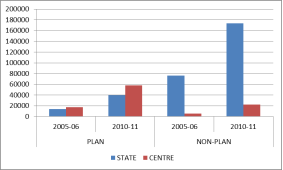 EXPENDITURE ON EDUCATION AS A PERCENTAGE OF GDP

It can be further observed that the contribution of state for all levels of education was more than that for Centre for both the years 2005-06 to 2010-11 as can be observed in figure 3.

Figure 3: Sector-wise share of State and Centre in Public expenditure on education as a percentage of GDP for 2005-06 and 2010-11 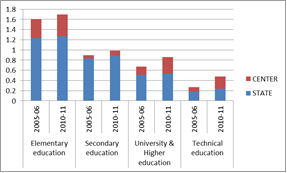 The present scenario calls for serious action in support of financing the higher education access in India. A bigger financial commitment surpassing the inflationary conditions both by the central and the state government is warranted. A larger share as a percentage of GDP should be allocated for the expenditure on education to enhance the access to education. Higher funds would be required to address the expenditures on revenue account, like that for filling the vacant faculty positions. On the other side, the expenditure on capital account like raising the qualitative learning infrastructure would be obligatory to achieve a higher rate of enrolments.

Access to equitable and qualitative higher education is the need of the hour for a country like India aspiring to excel in the economic growth and development. The commitment from government and private sector towards the investments in developing human capital will determine if the demographic advantage will be a dividend or a liability. Governments today increasingly face the limitation to raise means owing to the fiscal pressures, increased demand for access to education, rising costs, expectations for improvement in infrastructure, increasing the resources, enhancing, quality and competing prioritized demands on the government treasury. For a developing country like India, it is difficult to assume that government alone would be able to achieve the mammoth task of assuring access to education for the masses. Higher efficiencies can be achieved by the allocation of the funds on the criterion of ‘performance based funding’. Increased accountability should be accompanied by increased autonomy to raise funds at the institutional level, with wisdom to assure the opportunity of access to quality education for anyone willing to pursue the same.

The government through necessary regulatory changes should incentivize philanthropic and alumni contributions by allowing tax rebates on incurring such expenditures by individuals. Income generated through consultancies, research and development and providing training workshops in the area of expertise should be appreciated and encouraged.

Considering the present and future demand for higher education in India, it cannot be denied that financing remains a serious challenge. To achieve this mammoth task, all possible sources of funding will have to be explored to assure a qualitative and equitable access to higher education.