Economics has contributed greatly to every aspect of human life especially to the development of civilization. It is one of the oldest social sciences that study the economic activity of people for the purpose of satisfying their needs and demands which are basically the reason why economic activity exists.

Human beings are complex with undying desires and need to fulfill their survival as well as self-satisfaction in life. However, with such unlimited demands, there is only a limited amount of resources that we must wisely allocate in order to keep up and sustain order with these never ending wants. Economics is an important tool in solving the economic issues faced by individuals, firms and countries as well as helping in achieving gain which is valued in terms of money.

Demand, in economic terms, is defined as the ability and willingness of a consumer to purchase a particular product or service at a certain price in a given period of time, provided that all other factors are held constant. The term often used to describe these unchanged factors is known as ceteris paribus, a phrase originating from Latin.

Such as sciences like physics, economics is equipped with a number of laws as well. The very first law that will be introduced in microeconomics is known as the law of demand. The law of demand states that when the price of a good or service increases, consumer demand for the good or service will decrease, and vice versa, ceteris paribus. This is so because the opportunity cost of a consumer will increase when purchasing a more expensive good or service as they will have to make more trade-offs to acquire it. As for the inverse situation, when the price decreases, there will be an increase in demand as consumers will have more purchasing power for more affordable and cheaper goods or services. From the statement of the law of demand, it is concluded that the relationship between price and the demand or the quantity demanded is inverse.

In economics, diagrams and graphs are utilized to provide a better understanding as well as to make drawing out conclusions more convenient visually and mathematically. To understand the law of demand via this method, data may be tabulated in a demand schedule to organize information. With the given information that has been tabulated, a graph showing the demand curve may be plotted. In this way, the information may be viewed clearly and the relationship between the two data obtained may be easily concluded and understood. An example of a demand schedule and demand curve may be viewed in Diagram 1.

The condition of demand can be analyzed via the demand curve as well. However, this will require a separate set of data that will be needed to compare between the initial demand curve and new demand curve. A graph has been prepared in diagram 3 to provide a visual understanding. 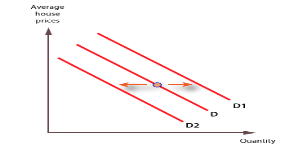 Following Diagram 3, the demand curve shows the relationship between house prices and quantity demanded, provided that all factors influencing demand is kept constant with ‘D’ as the initial demand curve.

In scenario 2, house prices are expected to drop in the future. This will result in a decrease in demand as people will wait to purchase houses when the price has decreased. The demand curve will then shift to the left thus the new demand curve becomes ‘D2’. From this, it is said that the demand has decreased.

To simplify this, the condition of demand is shown when there is a change in the position of the demand curve. When it shifts to the right, there is an increase in demand whereas when it shifts to the left, there is a decrease in demand. All conditions related to the law of demand as well as demand can be analyzed via the demand curve, a very suitable method to provide a good visual understanding.

The law of demand is indeed one of the most basic concepts of economics that states the inverse relationship between price and demand, assuming that all conditions affecting demand is unchanged. It becomes a guideline for many units, mainly of corporate background, to ensure a healthy growth in economy. It is extremely essential as it studies the human behavior towards change in prices in order to safeguard the satisfaction and benefit of both consumers and suppliers.

In economics, not only do we focus on the consumer’s perspective but as well as the supplier or producer’s point of view. Supply is defined as the willingness and ability of a retailer to produce and sell certain quantities of a good at manipulated prices in a given period of time, ceteris paribus.

The law of supply states that as the price of the good increases, the quantity supplied will also increase and vice versa, given that all factors influencing supply is kept constant. In other words, the law of supply exists in a direct or positive relationship. For example, the price of MP3 players are high in the market, thus suppliers will produce more MP3 players. This is so because the suppliers will want to achieve more profit as MP3 players are selling at a higher price.

Such as consumer demand, the law of supply can be portrayed via diagrams and graphs for the convenience of suppliers to analyze their data and keep organized records. An example of a supply curve with a tabulated data (supply schedule) is as given in Diagram 4.

Based on Diagram 5, we can see that two individual supply curves of Firm 1 and Firm 2 are plotted according to the data provided by the table. Let’s say Firm 1 and Firm 2 produce water bottles. When both of the firms set the price of one bottle of water at $ 1, they both supply 10 units. However, when the price of one bottle of water has increased to $ 3, they supply another 5 units so that they are able to obtain more profit from the sales.

In conclusion, the market supply curve is the horizontal summation of individual supply curves.

The factors that can cause a change in the demand curve are price of related goods, income, and expectation of future price of goods.

A change in income of an individual may cause a change in the demand for a certain good or service. As the income changes, the demand might increase, decrease or remain constant according to the willingness and abilities of consumers to consume the goods and depending on what type of goods is being consumed. When the demand for a certain good increases, its demand curve would shift to the right (outward shift), ceteris paribus.

Vice versa, when the demand for a particular good decreases, its demand curve shifts to the left (inward shift), ceteris paribus.

The Three Types of Goods that are influenced by change in income:

It is undeniable that when we make more money, we do spend a little more and the money that we spend is mostly on natural goods. For example, when we have extra money in our pocket, we tend to want to spend more such as on clothing or electronic goods. In general, natural goods are goods that we consume or demand more when our income has increased. Examples of natural goods are clothing, gadgets (namely smartphones and computers) and cars.

Examples of inferior goods are second-hand phones, used cars, and low-grade rice. When we make more money, we do not demand for more second-hand phones, as we will have a tendency to purchase a more advanced or highly branded phone such as Samsung, HTC and Apple. On the contrary, when our income has decreased, we consume more of low-grade rice compared to those imported ones from Thailand because of the price difference.

For example, when our income increases, do we consume more rice? Certainly not, we have an unlimited need or want to consume additional amounts of these goods. Another example is when our income decreases, do we buy lesser toothpaste? Do we not demand for toilet papers? We still consume these goods to meet our needs even when our income has decreased. Examples of neutral goods are rice, toothpaste, sugar and flour. In conclusion, neutral goods are goods that are necessary and needed to be consumed consistently when the income of an individual changes.

4.3 Expectations of Future Price of Good 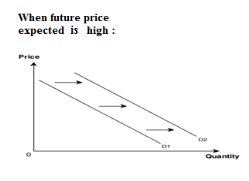 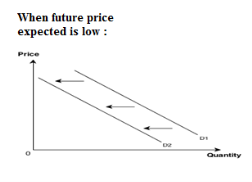