Oil industry play role in human life from discovering to existing in the world. Thus, economists survey oil price dynamic all the time and analyzing its influence in macroeconomics. This paper examines that price oil fall in international market and oil elasticity in regard of commodity in short and long terms related with its possible determinants.

Oil is a significant resource in the world human had established. Those who live in the world applying oil in a range of ways for many decades and it is still existing as a basic commodity. Oil price analysis and history can be start 1850s and this is considered to valuable good since Edwin Drake formed commercially applicable amounts of raw oil in 1859 (Titusville, Pennsylvania, 1896, 1896). Many factors related with environment, people and government influence the supply and demand of oil in the short-term and long-term range.

The Oil market and supply and the demand analysis

Drop in oil price is influencing the most important global macroeconomic developments of past months (Kenneth Rogoff, 2016). The sharp fall occurred in several times in the history of its market, recent price level is substantially decreasing.

There are few major oil supplier countries in the world and creates organization of the petroleum exporting countries (OPEC) which includes 12-member countries such as the United states, United Emirates, Iran, Iraq and others. Generally, their actions along with policy are playing the key role to set the price in the world. According to the supplying agreement of oil there are trying to stabilize the oil price through setting limitation of the supplying amount of oil. The Russian federation is also the major supplier of crude oil that not include in OPEC (Investopedia.com).

Supply and demand are fundamental concepts of economics whereas it is also the vital parameter of a market. Supply refers how much amount of commodity or product can producer offer to market at certain price (Guell. 7th edition). And the relation between price and product or services which is suppling to the market is mostly known as the supply relationship. Furthermore, demand represents how much number of a product as well as services which is wanted and desired by the buyers whereas the quantity demanded means the amount of a commodity or product that people or buyer are willing to purchase at a price amount. And the relationship between quantity demanded and price is particularly known as the demand relationship. Therefore, price can be taken as a reflection of supply and demand and they are correlated to each other. The relationship between demand and supply trigger distribution of resources. Also, demand and supply theory allow to distribute resources in the most efficient way.

Oil price drop by 60 percent in last 12 months in international market can be influenced by over amount of selling oil from supplying country. This is will increase demand and the supply curve shift to right by certain slope in the result. As shown as assumption model graph, there are demand, supply and slope shifted curve with two fixed prices (Figure 1). As a supplier producer or exporter countries increased their amount of crude oil into market and this is affecting to set new equilibrium of price (Guell. 7th edition).

The shale oil production is made by technological advances in drilling. It includes parallel drilling and the hydraulic rupturing of underground rock creations containing deposits of crude oil that are stuck within the rock.

The fast growth of U.S. shale oil production since 2003 was supported by the high price of conventional crude oil, which made this new technology competitive. Shale oil production is capital intensive which requires large sum of money. Production levels are primarily identified by drilling rigs capacity as equipment and skilled worker, that is one of the main reasons of the U.S. shale oil boom had been difficult to reproduce in other countries (Kilian, 2015).

The growth of U.S. shale oil production soon encouraged by policymakers and industry analysts, and U.S. vision on fuel industry becoming independent of oil imports, then net oil exports improving the U.S. current account.  At that time, U.S. shale oil production integrated by energy experts to revise their models and forecasts. The International Energy Agency expected that the United States would become the world’s top crude oil manufacturer by 2012, intended to pass Saudi Arabia by the mid-term of 2020s and evolving into a net oil exporter by 2030 (Kilian, 2016).

The internal supply surplus of light sweet crude oil raising pressure on the U.S. price of oil which measured by the WTI price of oil and relative to the Brent price benchmark. (Kilian, 2016).

There are burden of several types of shocks among few structural factors on oil price oscillations show apparent difference: From the supple aspect, both the external geopolitical events related with OPEC and other oil supply shocks have slight impact. In regarding of demand, both the aggregate demand shock and the oil market specific demand shock have significant effects in the short run. Then again, with the expanded sample range we find that the dynamic characteristic of the impulse response of oil price to demand side factors is not only mismatched with the basic economic theory, but also match with Kilian’s statement which based upon his research (Li et all, 2011).

In regarding of demand elasticity of oil, this commodity is elastic in the short run as because in the short term, there are the real consumer is no longer be able to buy it as they cloyed in dropped price and excess of supply. While it can be inelastic demand in long term in the given condition of over supply oil or shale oil since this commodity is basic consumption of all the business continuing.

Whereas, petroleum supply is inelastic because majority of refinery factory is not capable to of expanding their capacity. In long term, it can be elastic depends on OPEC action to limit the price or other price influence determinants (Guell, 7th edition).

Oil industry plays significant role not in the United states economy, also global economy. Drastic fall of oil price is caused by its excess of supply than its expected as defined as OPEC and conflict of exporter countries interest. However, it is inelastic in short run because of manufacturer limited capacity, it is more elastic in the long run because this industry is developing. 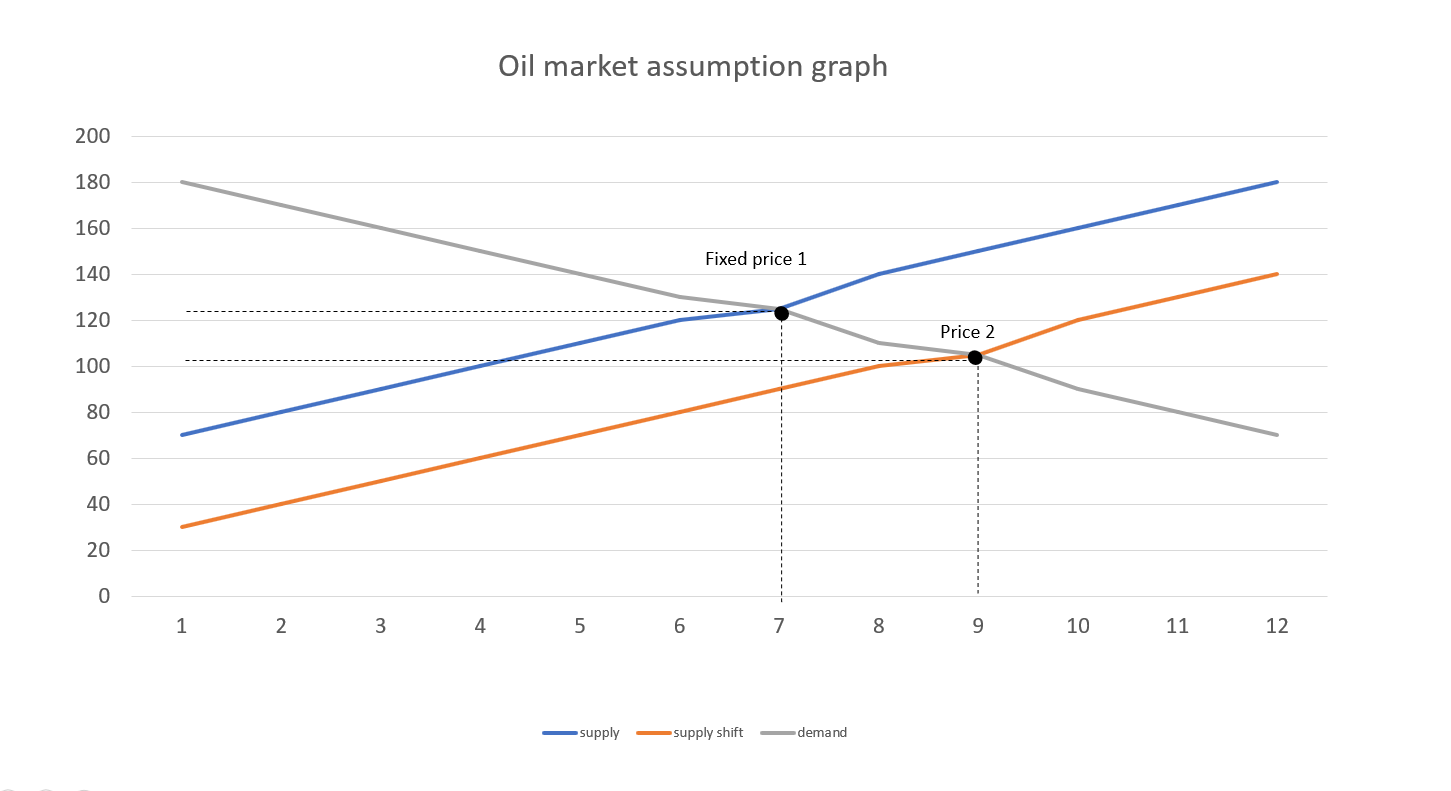 The graph illustrates price range from May 2014 to May 2017. Source of illustration Fred, International Monetary fund statistics.