Is there a Robust Link between Export Upstreamness and Financial Development?

As international data reveal evidence on distancing (upstreaming) of products’ conception from their end use, Antràs et al. (2012) examined bivariate correlations between export upstreamness and country characteristics. In particular, they reported an “especially robust” negative correlation between a country’s export upstreamness and financial development. We revisit the robustness of this inference and observe that such an association is highly sensitive.

The dominance of international fragmentation continues to be sustained by the strengthening of coordination of international production networks due to factors including sharp declines in transportation and communication costs, rapid reduction in the barriers to international trade and investment through regional integration agreements, as well as unprecedented innovations in telecommunications and information technology. The resultant processes have injected wide cross-country variations in the typical distance (upstreamness) between the conception of a commodity and final stage of its production with goods increasingly crossing multiple national borders while they are in process, as Multinational Corporations (MNCs) have been incessantly using cost-cutting tools to slice conventional value chains. With this backdrop, as international flow of intermediates exceeds 50% of global manufactured imports and 70% of global services imports and large MNCs continue to aggressively extend merger activities across borders to acquire disproportionate inï¬‚uence on aggregate economic outcomes, Antràs et al. (2012) provided a timely examination of associations between upstreamness and country characteristics, offering new insights into trade patterns at the country level by describing a country’s average position in global production chains i.e. whether a country typically tends to be an exporter (importer) in relatively upstream versus downstream industries. With this backdrop, in what follows, we revisit a key inference drawn by Antràs et al. (2012): “Column 4 (ref. table 1 below) indicates that the role of the private credit variable is especially robust.” 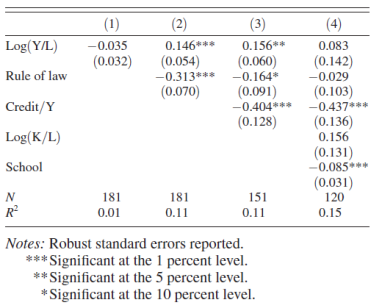 However, there does not appear to be any compelling reason behind an assumption that bivariate correlations between export upstreamness and financial development (measured by the ratio of private credit to GDP) would not be conditional on any of the other explanatory variables. As such, in what follows to check for robustness, we infuse interactions between the “private credit variable”[1] and each of the other controls used in Antràs et al. (2012).

Since economic theories do not generate a complete specification of which variables are to be held constant when statistical tests are performed on the relation between a dependent variable and the independent variables of primary interest, many candidate regressions often appear to have equal theoretical status. When a regression involves a set of variables that are always kept in the equation (free variables) and some others that the researcher feels comfortable experimenting with (doubtful variables), in practice, such experimentations are typically limited to a small subset of the feasible models that could have been estimated.

In such instances, the estimated coefficients on the variables of interest often turn out to be sensitive to the conditioning set of information. Any meaningful analysis should, thus, consider a range of models in each of which the free variables and some reasonable combination of the doubtful variables are included. If it turns out that inferences on variables of interest are essentially the same, in the sense that the estimates fall within a reasonable range for all choices of the combinations of the doubtful variables, then there need be no debate. If, on the other hand, the resultant range of estimates turns out to be too wide then the inferences are identified as fragile.

Consider, for illustration, conditional hypotheses (e.g. ‘a change in X is associated with a change in Y if and only if condition Z is met’) that are ubiquitous in all ï¬elds of economics. An allowance for interaction terms enriches a model by enhancing its capability of incorporating such conditional hypotheses. In that spirit, as a robustness check, we introduce interaction terms in the conditioning information set otherwise identical to that used in Antràs et al. (2012):

indexes countries; financial development is measured by the ratio of private credit to GDP as adopted by Antràs et al. (2012) from Beck et al. (2010), and

It is futile to contest that, for meaningful modeling, any analysis must be as rigorous as possible when assessing the robustness of inference(s). In that spirit, with specific reference to the findings by Antràs et al. (2012), we have looked into the sensitivity of any significant negative association between a country’s export upstreamness and financial development to parsimonious iterations of the conditioning information set. More specifically, we have incorporated interactions between financial development and other controls considered by Antràs et al. (2012). The importance of infusing these interactions is evident since there is no compelling reason to assume that bivariate correlations between financial development and export upstreamness, with or without the standard disclaimer that no causality is construed, would not be conditional on any of the other explanatory variables.

We observe that neither the sign of the coefficient, from regressing export upstreamness on financial development, nor its significance could be sustained after the inclusion of interaction terms in an otherwise Antràs et al. (2012) specification. This leads us to conclude that an association between a country’s export upstreamness and financial development is fragile. Our findings not only reinforce the importance of robustness checks, that can restore confidence in the enterprise of inferential economics, but encourage researchers to look more closely at modeling anticipated associations between the mounting evidence on upstreamness and financial development as well as other variables of potential interest.