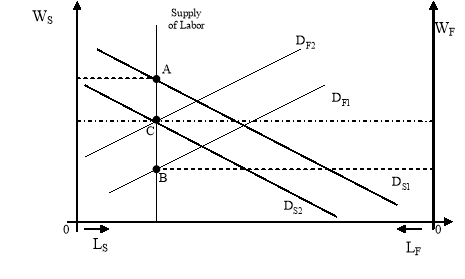 In our case there are two factors, labor and capital, and two goods, a labor intensive and a capital intensive. Sylvania being a capital abundant country, imports the labor intensive good from Freelandia. A subsidize in imports by Sylvania’s government would lead to a fall in Sylvania’s price of the labor intensive good, causing a fall in its production in Sylvania, a fall to the return to the labor factor and a rise to the production of the capital intensive good, a rise to the return to its capital factor. With less demand for labor, wages will fall. Most of the Sylvania’s demand for the labor intensive good would be covered by imports, which would cause an increase in its production in Freedonia, from where it is imported, which creates an increase in Freedonia’s demand for labor, since it’s a labor intensive good, causing an increase in Freedonia’s wages. If imports are issued for the first time to a closed country, trade would actually lead the wages of the two countries to a balance, as it is thoroughly analyzed in the 1a answer, since the demand for labor would rise in Freedonia and fall in Sylvania (fall of the return of labor factor) and the new equilibrium point of the supply-demand of labor in both countries could be as showed in the figure of answer 1a, where wages are the same for both countries and there would be no labor migration. But if the Sylvanias imports subsidize is imposed while in the 1a equilibrium, where wages are similar, the increase in Freedonia’s wages caused as explained above by Sylvania’s imports subsidize, will create a difference in the wages between the two countries. The line of the demand for labor in Fredonia will move from position DF2 to DF3 and point B will be the new equilibrium where Freedonia’s wages are higher than Sylvania’s, causing labor to migrate from Sylvania to Freedonia to obtain higher wages. 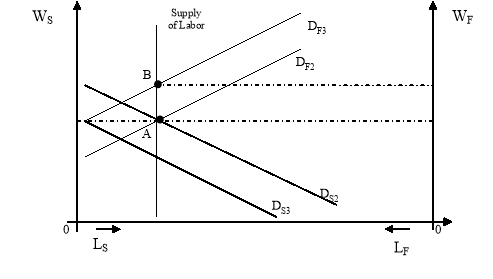 Subject_2.a)As the twin deficits hypothesis is explained by Wikipedia, there is a connection between the budget deficit of a country and its current account balance(3). The table and the graph below present the evolution of Greece’s budget deficit (its governments general net lending/borrowing as percent of GDP) and current account balance (% of GDP) using data provided by IMF for the years 1981-2014.

As it can be seen Greece’s governments general net lending/borrowing (%of GDP) is constantly negative (deficit). The same observation is also derived for Greece’s current account balance (%of GDP) with the exception of the last two years (2013-2014) for which, after a long period of decades there is a positive result.

2c) The entrance of Greece on the European Economic Community took place on 01/01/1981. Since then, Greece came through the different stages of the economic convergence to the European Union with various effects on its economic policy. Even though Greece’s particularity was acknowledged and certain actions were made for her to follow European countries economic programs, Greece couldn’t reach their rates of growth, ending with two devaluations of her currency, drachma, the first on 1983 (15%) with which the government aimed, as its Economy Minister pointed: “to narrow a gaping trade deficit and bolster the economy”(4), taking “measures to control imports”(4) and the second on 1985 (15%) with a parallel restriction of imports and a two years stabilization program.

On 1991 the Maastricht Treaty was signed which resulted to a more strict economic policy from Greek Governments of the following years to obtain an economic growth, through various stabilization programs. Their basic target was to fulfill the conditions for Greece’s accession in the European Economic and Monetary Union. The budget deficit reduces progressively to fulfill the necessary levels. On 1998 Greece’s central bank announced the devaluation of drachma over ECU (12%), to entry the EU’s exchange rate mechanism since there was Maastricht Treaty’s condition for Greece to maintain stable the exchange rate for two years prior to her accession in the European Monetary Union(5).

Finally, on 2000 after reaching Maastricht Treaty’s condition of an inflation below 2%, Greece achieved an appreciation of drachma(6) and the new exchange rate was fixed on 304.750 drachmas/euro. Greece applies for her full entrance on the EMU and Eurozone and is accepted starting from 1/1/2001. 2001 is the last year of drachma as Greece’s currency, since from 1/1/2002 Euro is the new currency used.

The strict fiscal policy that was followed due to Maastricht Treaty lasted until 2004, when the Olympic Games resulted in an increase of the budget deficit, which worsened during the following years. 2009 Greece reached a budget deficit of -15.647% of GDP, which led to severe fiscal discipline, huge loans from other European countries, IMF, ECB, memorandums with strict measures on every economic aspect and a strict surveillance of the troika. Certain changes were made and Greek Governments tried to comply with the agreements and the measures required, which lead to serious reduce of the Greek budget deficit to -2.685% of GDP on 2014 and a positive current account balance from 2013 for the first time during the last decades.

Subject_3. It is thoroughly known that wages are closely connected with productivity. As indicated by Mankiw (2006) “the wage a worker earns, measured in units of output, equals the amount of output the worker can produce”(7). In other words if a country’s productivity raised, it would simultaneously lead to a rise in wages. Also, a Krugman (1997) argues the creation of a modern enterprise/factory in a less developed country with money/technology from the advanced nations would lead to high productivity of that enterprise/factory, but it wouldn’t affect much the productivity of the hole country, since it’s average productivity would stay almost the same(8). So, money and technology from advanced countries wouldn’t be able to raise a less developed country’s average productivity much and that is why wages would stay low.

Continuing, as explained by Cristopoulos et al. (2015) the current account balance equals exports minus imports, which also equals savings minus investment (S-I=X-M)(9). A trade surplus is actually a positive current account balance and means that the country is exporting capital. It’s not logical according to the above equation for a country, as the less developed ones of our subject, to have a trade surplus when it has an inflow of capital from the advanced nations. As explained by Krugman (1997) it’s impossible for a country to have a positive result on the one part of the equation (S-I=X-M), with more exports that imports, and a negative one on the other part when inflows of capitals exceed savings(8).

Subject_4.a)As Christopoulos et al. (2015) notes, purchasing power parity exchange rate can be calculated by the type e=P/P*, where e is “the nominal exchange rate expressed as units of domestic currency per unit of foreign currency, P is the domestic price level and P* is the foreign price level(10). So, the PPP of our subject is e=100€/80£=1.25€/£.