The 2007/2008 global financial crisis is one of the greatest financial problems that the world has ever experienced. Financial analysts denote that due to this crisis, most financial institutions collapsed, and most government in the world were about to become bankrupt. Ahrend and Goujard (2013) denotes that one of the reason for the occurrence of this financial crisis is a fall in the mortgage banking in United States, and it had a spiral effect, affecting most countries whose economies are dependent with that of the United States. Grant (2012) disagrees with this assertion, and denotes that some of the major reasons for the emergence of the global financial crisis were weak government controls of the financial institutions. Ahrend and Goujard (2013) believe that irrational exuberance is the main cause of global financial crisis. Shiller (2000, p. 4) defines irrational exuberance as an aspect whereby an individual is engaged in a speculative behavior. Grant (2012) maintains that on most occasions, speculative investors will always act on limited information for purposes of making an investment, this is more so, when it comes to investing in the property and housing market. In the view of Efenhoff (2009), there is a misplaced assertion that property houses will always increase in value, irrespective of the economic situation. Ahrend and Goujard (2013, p. 3015) maintains that a number of the rationale explanations have been given concerning the run up to housing prices in the United States and Europe since the later periods of the 1990s.

One such explanation is that because of population pressure, pieces of land for building homes have diminished. Based on this fact, the housing prices have arisen because there is a limited supply of the homes. Shiller (2005, p. 16) maintains that another rationale explanation given towards the ever rising prices of land, and houses is based on the materials and resources that go into houses. Materials such as steel, concrete, and lumber are always in great demand, and are increasingly becoming expensive. Based on the nature of materials that goes into homes, Efenhoff (2009) maintains that the housing prices will never depreciate, but will constantly appreciate in value. Grant (2012) further maintains that the housing boom always results to the interest rate cut that is always implemented in various countries of the world, for purposes of dealing with a weak global economy. In as much as low interest rates play a role in increasing the home prices, central banks have always reduced interest rates on numerous occasions in history. However, these reductions have never experienced a concerted boom in the housing prices as experienced in the periods of 1990s, and early years of 2000s.

Based on these facts, Efenhoff (2009, p. 33) maintains that it is incorrect to explain the prices of homes, based only on the costs of building the homes, the population growth, or even the reduction in interest rates. Shiller (2008) argues that none of these factors has the capability of explaining the exorbitant increase in the housing prices that started taking place in the year 1998 in various parts of the world. Ahrend and Goujard (2013, p. 3016) maintains that the best explanation to this boom in home prices is irrational exuberance. Speculative buying of homes is a concept that is deeply entrenched in Europe, America, and in most states of the world. People purchase homes and land, with the belief that they will appreciate in value, thus pushing the prices of homes and building higher. In fact, Sternberg (2013) explains that during the financial crisis, the pricing of most homes did not reflect their true values.

In the view of the Ahrend and Goujard (2013, p. 3016), most houses during this period of the financial crisis were overpriced, making most mortgage holders to be unable to pay their mortgages, leading to the near collapse of the banking sector. Furthermore, Grant (2012) maintains that before the periods of 1960s, most people in the United Kingdom as well as the United States were not aware that their wellbeing depended mostly on the properties under their possession. However, in the current years, with information widely available concerning the prices of homes, many people are now worried about home prices. This therefore makes them vulnerable to the kind of feedback that normally generates home bubbles. Furthermore, to his belief that irrational exuberance is a factor responsible for the financial crisis of 2007/2008, Foster and Magdoff (2009) explains that people have been aggressively bidding on homes, since the year 2000, and this is based on the fear that the prices of the homes under consideration may rise beyond their ability. On this basis, they may not be able to afford buying a house. Grant (2012) maintains that this is a factor that caused the emergence of the 2007/2008 financial crisis, that is, speculative buying. 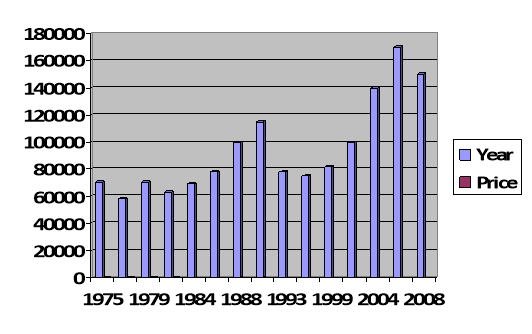 By carefully analyzing this chart, it is prudent to denote that the UK housing prices in the periods of 1970s was increasing gradually, with its peak being in 1988, when the housing prices rose to more than 100,000 pounds. It is important to understand that during the periods of 1980s, the economy of the United Kingdom was experiencing extensive growth. However, during the early years of 1990s, the housing prices fell, and this is basically because of a recession that the economy of UK was experiencing. This is a clear indication that property prices will always fall, when the economic condition does not favor their growth in prices. However, during the later years of 1990s, this graph indicates that the housing prices in United Kingdom increased significantly, up to the year 2007, when its prices dropped. It is important to provide an explanation that it is the years of 2007/2008 that the world was experiencing a financial crisis.

Foster and Magdoff (2009) maintain that during the periods of 2001, to 2007, most lenders were increasingly offering loans, even to people who had poor credit rating. Forrest and Yip (2011, p. 15) denotes that even products which did not require a deposit, were able to receive credit from financial institutions. Based on the easy availability of equity, people began to buy houses for the fear that the houses would became expensive, making it impossible for them to afford it. Foster and Magdoff (2009) maintains that by the year 2006, 9% of the British homes were bought by mortgages, some of which it was difficult to pay. Mareš (2013) explains that due to this speculative buying, the properties prices were able to increase significantly, leading to the housing bubble. Furthermore, Foster and Magdoff (2009) manages to explain that houses were in such a high demand during the periods of 2001, to 2007, that the government of UK formed a commission into analyzing the various methods of increasing the supply of houses in UK. Muradoglu (2010) explains that what were required were 120,000 housing units per year. In the view of Mareš (2013), building these housing units during this period would have helped to reduce the prices of houses by 1.6%. This did not happen until the occurrence of the financial crisis.

After the 2007/2008 financial crisis, United Kingdom faced a situation where there was household debt, as well as government debt. Mareš (2013) maintains that after the start of the 2007 financial crisis, most houses in the United Kingdom experienced a fall in their pricing value. Martin and Milas (2010) maintain that the housing prices fell to an average value of 20%, and he denotes that the major reason for a fall in the housing prices was difficulty in assessing mortgage finance. Martin and Milas (2010) further explains that after the credit crisis was over, most banks in the United Kingdom did not have enough liquidity, and this greatly reduced the mortgages that were available to people. Furthermore, Forrest and Yip (2011) maintains that the number of mortgages that were approved fell considerably, resulting to a low demand of housing units. This in turn led to the downward fall of prices in the United Kingdom. Furthermore, banks now made it mandatory for homeowners to deposit a bigger amount of money, before they could access credit.

It is important to remember that before the financial crisis, mortgages were 100% available to people, however, after the financial crisis, most banks wanted people to make a deposit of either 25% of the total amount, or 10% deposit. Because of these requirements in deposit, Cooper (2009, p. 173) maintains that majority of first time buyers were not able to afford buying these homes, and hence they were left out. Martin and Milas (2010) further states that in the year 2008, the savings ratio of the United Kingdom was very low, and this was an indication that most of the households in the United Kingdom were surviving on debts, and thus it was difficult for these households to save for a mortgage deposit. This was a major factor in the depression of the housing prices.

Forrest and Yip (2011, p. 13) explains that most households and financial institutions sought to reduce their debt levels, and improve on their reserves. On this basis, banks were not willing to lend, and many household improved on their savings ratio. The following graph illustrates the pricing of houses between 2004, to 2014. The table for the graph is found in appendix 3. 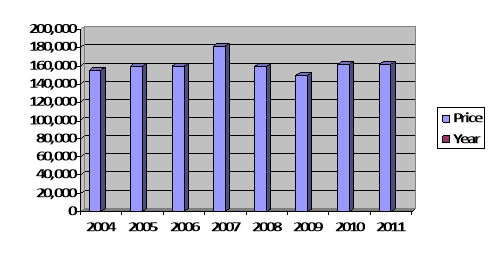 By analyzing this chart, it is possible to denote that years 2004, to 2007, the housing prices were increasing significantly. On the other hand, after 2007, there was a sharp decline in the housing price due to the inability to obtain credit to finance the acquisition of houses. This led to a low demand of the housing units in the United Kingdom. However, between the chart depicts that the years 2010, saw an significant increase in the housing market, in UK.

Cooper (2009, p. 171) explains this fact, and denotes that the main reason as to why there is an increase in the housing prices during these periods in time is the government policy, whereby it seeks to make it possible for people to buy houses, by readily availing credit. For instance, the government of the United Kingdom has come up with a monetary policy referred to us the help to buy policy, and it makes it easier for anybody who has a mortgage deposit of 5% to make the deposits, and hence buy a house. Based on this fact, Schwert (2011) maintains that the housing prices in United Kingdom have started to accelerate. Cooper (2009, p. 172) maintains that the average growth in housing prices grew by 4.7%, since 2010, despite the low mortgage rate of 3.3%. Thanks to the help to buy policy, whereby an individual can now buy a home with as little as 5%, as opposed to the 20% imposed by the banks during the financial crisis. By looking at these facts, it is to denote that the 2007/2008 financial crisis came as a result of irrational exuberance. This is because when too much money is within the hands of the citizens, they will begin speculating on the property prices and this drives the demand of the prices high. Their speculations will only be based on limited information concerning the prices of the property, and hence the resultant increase does not depict the actual value of the properties. Furthermore, Sternberg (2013, p. 22) maintains that the global crisis of 2007 was able to correct the property prices that had increased through speculative buying. This is mainly because money was not readily available to purchase the products.

Grant, W. (2012). The consequences of the global financial crisis: the rhetoric of reform and regulation. Oxford, UK: Oxford University Press.

Shiller, R. J. (2008). The subprime solution: how today’s global financial crisis happened and what to do about it. Princeton, N.J.: Princeton University Press.