1(a) Explain the link between International Trade and the Production Possibility Curve.

Quoting Benjamin Franklin, “No nation was ever ruined by trade”. International Trade is the exchange of goods between countries because of the potential gains from such an operation. On the other hand, the Production Possibility Curve (PPC), also known as the Production Possibility Frontier or Boundary or the Transformation Curve shows the maximum combinations of two goods that a country can produce, with its given resources and at a given level of technology. These two concepts can be colligated through numerous ways, as depicted below.

According to Samuelson, trade extends the Production Possibility Frontier. This is, indeed, accurate as trade has the same effect as an injection of capital in the economy or an improvement in technology. We can apply this concept in real by considering the example of Mauritius and the European Union (EU). The trade relations between Mauritius and the EU are strong, multi-layered and have grown over the years. Mauritius, for instance, basically exports sugar, clothing/textiles and tuna and importsmachinery, transport equipment, food and manufactured goods. The PPC is based on different assumptions, one of which stipulates that resources of a country will be diverted toward the production of two goods only. In this case, the example of sugar and transport equipment shall be considered for Mauritius. 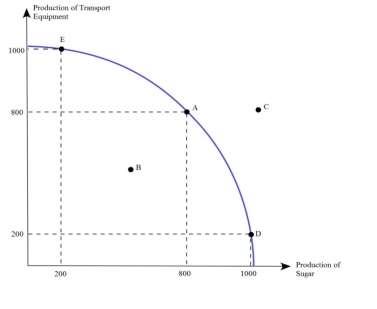 The previous diagram shows the PPC for Mauritius. Initially, Mauritius is producing 800 units of Sugar and 800 units of transport equipment, at A. Given that it is producing on the PPC, this signifies that all resources are being fully utilised. Thus, Mauritius is being productively efficient. Point B depicts an underutilisation of resources and is not desirable, while point C depicts an unattainable level of production in the short run, but which is desirable. Now, assuming that the demand for transport equipment rises domestically, Mauritius has to find a way to cater for this. To produce more of transport equipment means that sugar has to be sacrificed and assuming that the quantity demanded for sugar remains the same, this will not prove right. Another assumption of the PPC theory is that the level of technology remains constant and had there been any improvement in technology, Mauritius could have provided for the rise in demand. However, in the short run this is unlikely and the easiest way is to get involved in International Trade. If 1200 units of transport equipment are needed, 200 units will have to be imported from the E. This will shift the PPC outwards as shown below. 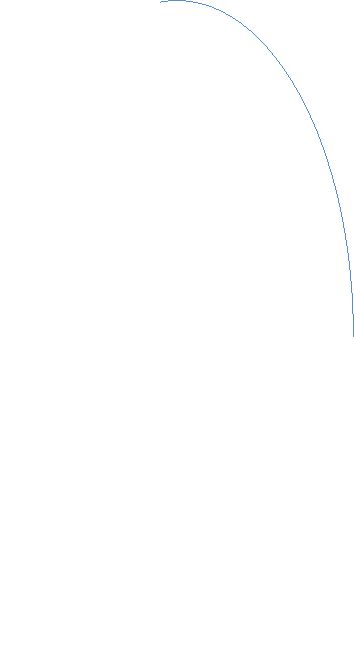 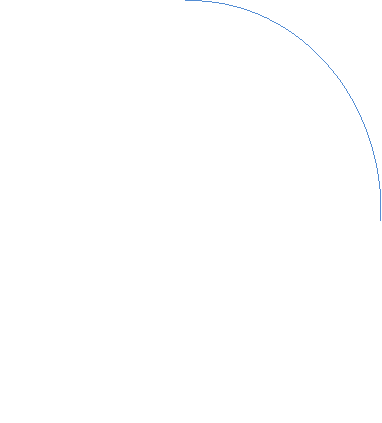 The PPF has shifted outwards but from the Y-axis only, due to an import of transport equipment only. This is called an asymmetric growth. Mauritius will now have 1200 units of transport equipment at X due to International trade. Basically, trade is as effective as discovering new resources or having an improvement in production techniques, which all cause an extension in the PPC. This is very desirable for and economy and raises the standard of living of the population.

Moreover, the PPC and International Trade share another relation as the former provides essential information as on what product should a country specialise. With trade, each and every country is able to focus on the production of goods and services that it is efficient in producing while engaging in trade to obtain those goods it is less efficient in producing. This is a concept known as International Specialisation. Countries benefit hugely from specialisation and the concept of “Gains from Trade” is shown through Absolute Advantage and Comparative Advantage.

A country is said to have Absolute Advantage in a good when, with the same amount or resources and technology, it is able to produce more of it than another. Adam Smith’s model of International trade advocates that countries have Absolute Advantage over each other. This can actually be represented on a PPC. Suppose that Mauritius and the EU produce two goods, namely Transport Equipment and Sugar. Also, there are no transport cost and no barriers and there are constant returns to scale, that is, the slope of the PPC will be a straight, downward-sloping line. By dividing their resources equally between the two goods, the PPC’s are as follows:

However, it is less obvious that there will be gains when a country is more efficient in producing both goods. From there emerges the principle of Comparative Advantage. This is the Ricardian model (named after David Ricardo) and concentrates on how Comparative Advantage arises due to differences in natural resources or technology. Consequently well endowed, a country can produce a good at a lower opportunity cost than another. This can be related to the PPC, as a fundamental use of a PPC lies in the depiction of Opportunity cost. It is to be noted that the Ricardian theory is based on a two-commodity and a two-country model. Applying this knowledge to the previous example, it is assumed that the EU represents one single country and the two commodities here being, transport equipment and sugar. Initially the amount of goods produced by each country, before specialisation, is as follows:

Mauritius, now, is efficient in the production of both goods. However, gains are still possible from trade if opportunity cost ratios differ. If it decides not to trade at all and opts for self-sufficiency, every time that more of transport equipments were needed, resources would have to be diverted from the production of sugar. This can be shown by a movement on the PPC. 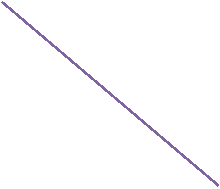 Thus, there is a clear relation between the concept of Comparative Advantage and the PPC.