International Mobility Of Labour And Capital 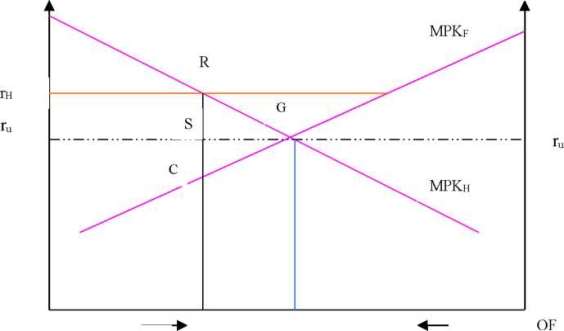 The country’s Home output increases by area KoK*GR but also “Home” has more cost for acquiring further capital from “Foreign” and this cost is area KoK*GS, so the net gain in country HO is: 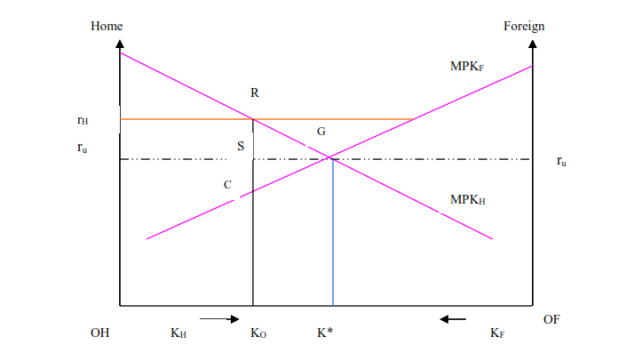 The country’s Foreign output decreases by area KoK*GC but also “FO” gains for selling more capital to ”HO” and this gain is area KoK*GS, so the net gain for “FO” is:

In the following table we can see the effects in credit and debit of Greek balance of payments of the four transactions that we have:

The theory of absolute equivalence of purchasing power parity , based on the law of one price, is a theory of exchange rates whereby a unit of any currency should buy the same quantity of goods in each country (Appleyard et. al., 2006).

In other words, the price of a product in the domestic market at the time t must be equal to the price of the product in a foreign country in the same period , at the current exchange rate. If there are no trade restrictions and other transaction costs, the law of one price must be true, otherwise it will create opportunities for arbitrage. However, the law of one price should apply only to goods traded internationally (Png, 2002).

The absolute equivalence of purchasing power enforces the law of one price in a basket of goods considered to represent the consumption of an average consumer in a given country and is used to calculate price indices. That is, general price levels determine exchange rates.

Limitations of the purchasing power parity

The absolute purchasing power parity assumes the absence of transport costs , tariffs or other barriers to the free movement of trade , so the relevant version of this theory comes to fill the gap. The relative purchasing power parity says that the rate of change in product prices should be similar when measured in a common currency, provided that the cost of transport and the various barriers to trade remain unchanged. As there are no changes in transportation costs, trade barriers, etc. , the change in the exchange rate should be approximately proportional to the change in the ratio of the general price levels of two countries. The relative purchasing power parity is often used to classify a currency as overvalued or undervalued. The term overvalued or undervalued suggests that exchange rates should not be what is in free foreign exchange market (Png, 2002).

The relative purchasing power parity does not mean that it is not easy to predict the exchange rate, but the quality depends on the quality of forecasting price levels in both countries. Without such price changes, a company faces no real foreign exchange risk from its operation. Thus the distinction between the nominal rate and the real exchange rate is very important because they have different implications for the foreign exchange risk (Appleyard et. al., 2006).

There are serious indications against the validity of PPP in the short term . Short term exchange rates are adjusted very quickly to imbalance, but long-term contracts and price agreements make many prices in the economy sticky prices, both in the short and medium term.

Similarly, in the long term, countries with persistent negative differences in inflation rates tend to see an appreciation of local currencies. Over time, the relative price levels of importance. It should be noted that the assumption of equivalence of purchasing power is not a complete theory, it simply describes a relationship . Also the relation holds and vice versa, ie a change in the exchange rate will affect the price levels and vice versa (Varian, 2006).

A practical application of PPP

Many analysts use the exchange rate dictates the equivalence of purchasing power to compare key sizes between different countries. Moreover, the rates dictated by purchasing power parity is more stable than the market rates and thus large changes in market rates do not affect too much the valuations of financial fundamentals (Appleyard et. al., 2006).

A forward contract in foreign exchange (currency forward or forward exchange contract) is an agreement between a bank and a client (or another bank ) to deliver a given amount of foreign currency at a given time in the future , but at a rate to be agreed to once the contract is made.

This rate is a forward rate. In every contract there are two positions: the buyer (long position) and the seller (short position). Futures contracts are used for three reasons (Appleyard et. al., 2006):

The forward exchange market allows ability to cover its foreign currency risk caused by changes in the exchange rate.

The determination of the forward price is formed by three main factors (Png, 2002):

1. The difference between domestic interest rates from foreign

2. The duration of the forward transaction f

This means that the determination of the forward rate is determined by the behaviour of investors in the forex market. If the futures market force F-S / S> 0, then an investor borrows € with which to buy $ sided market and since then lend, sells the value of its investment futures market. Dollars buy more euros in forward market than in the spot market. The opposite if F-S / S <0.

iD is the interest rate in domestic country

iF is the interest rate in foreign country

St is the current spot exchange rate at time t

Ft is the forward exchange rate at time t

The domestic interest rate is

By free rate is meant a system of a fixed rate based on the forces of supply and demand. The exchange rate is that the equilibrium of supply and demand for a currency. Market participants continuously adjust their expectations and needs for foreign currency assessing and responding to any available information or new news. As a result, when changing expectations for inflation rates, interest rates, economic growth, the relevant government policies, etc., ie quantities that affect supply and demand for a currency, we adjusted the rate and equilibrium.

In such a system the exchange rate fluctuations will be random, as long as may be determined by the random flow of information to the market.

and the domestic interest will be

If the financial participants believe that the government is credible and there will be no further devaluation then they will buy the devaluated currency in low interest, they will change it to the appreciated currency that has higher interest and they will lend in the higher interest. Then they will take the profits and exchange them in the domestic currency in the expected exchange rate and they will have gain from the arbitrage. The domestic interest rate after devaluation will be increased (Varian, 2006).