Influences On The Housing Market In Dublin

The following Report has been drafted in two parts. Part one identifies and discusses factors that influence the long-term and short-term demand for housing in the greater Dublin region. Also discussed are the factors that influence the supply of housing within this region and how demand and supply of housing affect the market price. Part two discusses the Irish government’s current housing policy and its effectiveness in addressing the demand for housing.

2.0 Factors that influence the long-term and short-term demand for housing in Ireland.

2.1. Consumer Confidence. From the beginning of the recession in mid-2007 to the end of year 2012 confidence in the Irish property sector collapsed. This was due to the rate of unemployment increasing, lack of credit available and people becoming less optimistic about their job situation and financial circumstances.

Potential property purchasers decided to hold onto the money saved instead of purchasing property which was falling in price. As the demand for housing decreased the price dramatically fell. 1In Dublin between the years 2007-2012 the rate of decline of the price of houses was 56% and apartments 62% from their peak. (Ireland, 2012)

At the end of 2012 the economy started to recover and consumer confidence began to rise slightly, which has led to an increased demand for housing stock which is not available. This in turn is leading to another property bubble within the greater Dublin Region.

2.2 Incomes and Employment. Three of the main factors that affect demand for housing are Incomes, Employment and Confidence. In early 2013, when economic conditions in Ireland improved, demand for housing rose sharply. This was due to the rate of unemployment falling which in turn meant people had money to buy houses.

Once the recession hit in 2008 many developers went bust and there were no developers willing to develop lands in which they felt there was no demand for. This all changed in 2013 when confidence and employment rose within Dublin. Once incomes and employment started to rise, the supply of credit available from the banks made it possible for people to get mortgages.

2.3. Mortgage Availability & Interest Rates. During the years of the Celtic Tiger most banks were offering 100% mortgages. This increased the availability of credit which in turn increased demand and prices.

In 2008 when the financial crises occurred banks and building societies tightened their lending criteria, which made it much harder to get approved for a mortgage. Due to this and an over- supply of houses, demand and prices fell dramatically causing the biggest property crash in history.

2.4. Demographics. The large number of young people reaching the age at which they might form their own household 25-44 year olds is at a high level in Ireland (Figure 1). Also the aging of the population and increasing life expectancy is causing increased demand for new and affordable homes. These demographic factors imply a potential demand for around 25,000 additional housing units per annum.

According to result of the last census 2006-2011, factors such as single parent families, increased desire for young people to move out of the family home and marriage break up has created an average of 7000 new households per annum. Against this the need for new housing is being reduced by net emigration. 2In the past four years, over 300,000 people have emigrated from Ireland; 40% were aged between 15 and 24. (RTE, 2013)

Table 1 shows population of Ireland in 2011 by age group.

3.0. Factors that influence the supply of housing in Ireland.

The National Asset Management Agency (NAMA) was established in 2009. It was set up to acquire loans linked to land and development from numerous banks which had defaulting developers as clients at the height of the Celtic tiger. 71 billion euro worth of loans were acquired from these debtors making the agency the biggest property company in the world.

While Nama has finished off some ghost estates around the country, the biggest problem is the land banks which it has acquired. Nama will not sell the large amount of land banks cheaply as it is company policy to wait until the market price has risen to achieve maximum return for the Irish taxpayer. This in turn is leading to a shortage of supply of serviceable land for new developers around the Dublin region.

During the recession Developers that were not in the control of Nama undertook speculative hoarding in certain areas of South Dublin where it is known demand will be high and returns on house prices will be very profitable.

Many big developers in Ireland cannot get finance to purchase land or if they already own land the banks will not release funds to enable them to fund the cost of construction. This is leading to a major shortage of houses being constructed in prime areas of Dublin. Many of the major house builders such as Durkin Brothers & Mc Inerney homes and have gone bust with their land banks being transferred to Nama.

3.3. Innovation & Skills. After the property crash developers/ house builders are generally more interested in improving their profit margins rather than spending money on developing new and improved building techniques.

Most consumers will hold a preference for a traditionally built home as they are cheaper than green and energy efficient homes, leading developers away from investing in and up skilling staff. Since the beginning of the economic crises due to a lack of employment opportunities many of the young skilled workforce have emigrated.

3.4. Cost of Labour & Materials. The cost of labour in the construction sector in Ireland has fallen by roughly 33% since 2008. During this period the cost of materials rose due to the cost of producing these materials.

The process of applying for planning permission to receiving permission in Ireland usually takes 2-3 months. If an application has been refused it can take up to between 6-12 months. This is due to a planning appeals board set up by the government called An Bord Plenala. 4All planning decisions made by planning authorities may be subject to independent review by An Bord Pleanála (the Board). (Anon., 2014)

A lack of infrastructure within development zones and the time it takes to build this infrastructure before any houses can commence causes long lead in times for the supply of new homes.

3.6. Demand. Demand for new houses within Dublin is far outstripping supply but the lack of skilled workers available and shortage of available land has seen the cost of new builds begin to rise. During this period the cost of materials rose due to the cost of producing these materials. With the banks releasing more funds for potential home buyers the demand for houses in Dublin has risen, this in turn has led to some developers who have been waiting for conditions to improve to start developing their land banks. 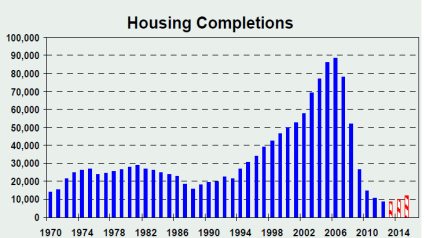 4.0. How does demand and supply affect the market price of Housing

4.1. Demand. As seen in Dublin today there is a high demand on 3 bed family homes. This is due to many factors discussed previously. Strong demand increases the market price of houses when there is a scarcity of a required product (Houses).This leads to a sellers’ market, whatever the potential purchaser is willing to pay and can afford to pay. The vendor’s asking price will be met or exceeded. When supply of housing cannot keep up with demand it increases the market price (equilibrium price) of houses.

Once demand for new houses began to fall pre- recession, construction of houses stopped. When demand fell prices fell. One of the main reasons for the dramatic fall in house prices was over- supply. When supply of houses outweighs demand it decreases the price. This is known as a buyers’ market. This is governed by how low an offer the vendor is willing to accept. The vendor’s asking price will usually be negotiated lower than the asking price. Market Price (equilibrium price) decreases.

During the Celtic Tiger demand for houses increased even though prices increased, this was due to consumers afraid of being left behind (speculation case) and not being able to afford new homes in future years. (Price inelasticity) 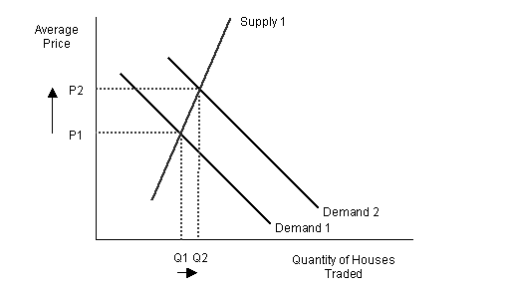 4.2. Supply. Between the years 2004-2006 there were 252000 dwellings built in Ireland. The supply of houses in this period kept up with and exceeded demand but prices still rose. The higher the price of houses became the more houses were supplied. Once the recession hit the supply and demand for houses came to a halt. There was an over-supply, driving the market prices (equilibrium price) of houses down.

The supply of new housing tends to be inelastic in the short run because house prices are determined by demand factors such as income, unemployment and interest rates. The supply of rented and social housing will also affect the supply and price of new homes to the market. In perfect market conditions the more houses supplied should lead to a fall in market price, this was not the case during the boom years.

Because of lack of supply of family homes in Dublin prices are increasing, this in turn is leading developers to start developing their unused land banks again as they can see the potential of future profits. The only problem with this is, these houses will not be on the market until next year. This has the potential to cause another property bubble within Dublin which will drive the cost of houses up further. 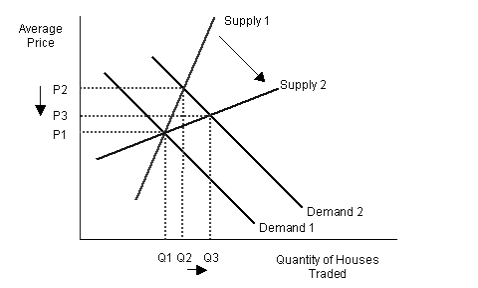