The furniture imports in India has maintained a significant growth in past years. The key factors leading to increase in imports in India are increasing housing and commercial construction, increase in income level and influence of global lifestyle on urban population of India which tempts them to move towards the imported furniture. Earlier the European furniture was the major contributor in furniture import in India but from past few years a major portion of furniture is imported from China alone. 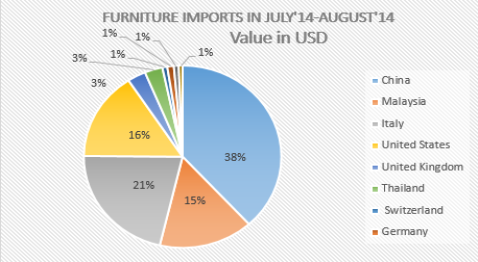 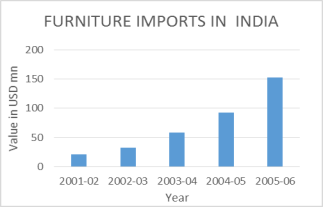 According to law of Diminishing Marginal Returns, the increase in one input beyond a certain limit keeping others fixed will lead to decrease in productivity. In furniture industry, the analysis of diminishing marginal returns was done by considering the labour involved in the manufacturing of table. A normal table in a dealer’s shop in Delhi, Godrej Dealers, costs Rs. 2000. The production of a table requires 2 labours. If 5 carpenters are allotted to produce one table, the productivity increases but if the labour input goes beyond 5, there is a fall in productivity of table furniture. The analysis can be shown in the graph below: 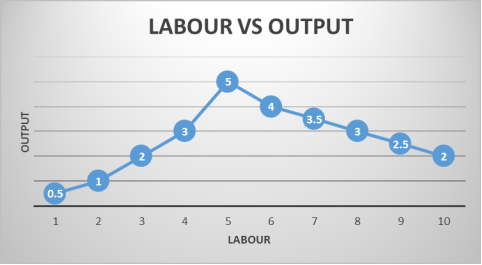 To develop Goodness of fit, the function has been assumed to be liner and regression analysis has been done to estimate the demand.

Coefficient of P- Price of the wooden furniture is –ve

Coefficient of me-Income level of consumers is + ve

Coefficient of P1- Price of substitutes (metal/fibre) is +ve

The above results shows a bit more than a moderate relationship between dependent and independent variable. According to the value of R2, 69% of the demand variation is explained by the variation of the price of the products, income level and price of the substitutes. Others factors which are not taken into account into above model should be government policies regarding cutting and selling tress and woods, import of woods etc.

The above coefficient of independent variable gives us the result which is related to microeconomic theory. It clearly states that the demand (Q) falls with rising prices of main product and rises with rising income levels and prices of substitutes. 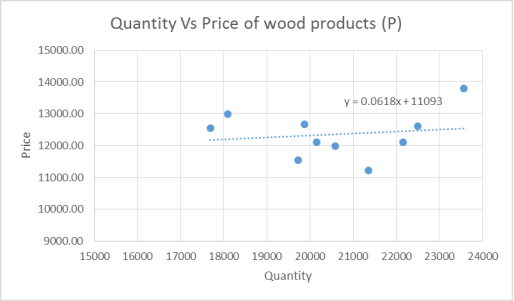 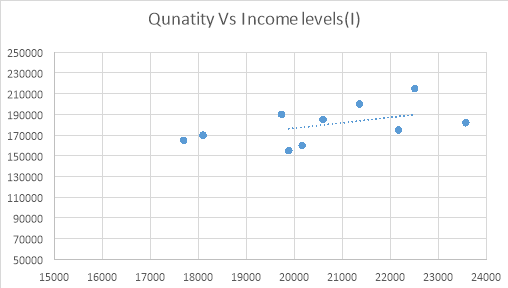 Hypothesis testing: By using the value of obtained value of t-stat and P-values the above mentioned hypothesis will be tested.

According to the data independent variables like P and I doesn’t show any significant impact on Quantity demanded (Q) apart from variable P1 which is significant. This kind of result is obtained mainly because of less number of data.

As the furniture industry in India is largely unorganized and fragmented, it provides immense opportunities to domestic and global players. The main reason for increase in demand for furniture is on account of increasing purchasing power of the consumers, change in the lifestyle, increasing urbanization and availability in tier II and III cities. For increasing the product availability, organized furniture manufacturers are also getting into tie-ups with E-commerce retailers. The furniture retail chains are also focusing on increasing their presence in tier II & III cities.

“India Furniture Market Forecast & Opportunities, 2019”, estimates the country’s furniture market will grow at a CAGR of around 26% during 2014-19.Western region is likely to be the highest revenue contributor in the furniture segment, followed by southern region as there are a large number of industrial hubs and upcoming infrastructure developments in these regions. Over the next few years, the Indian furniture market is expected to witness increasing consolidation due to growing entry of international companies as a result of the government’s 100% FDI approval into the country’s furniture industry. As a result, the share of small and mid-sized furniture players largely forming the unorganized sector is expected to fall over the coming years.

The present market size of online sales in India is at Rs. 200 crore at present and is expected to grow five times to Rs. 1,000 crore by 2016. Certain categories such as coffee tables, bookshelves and shelves in general could be the bestsellers in the near future. This comes with its own limitations as certain items required to be seen and touched, like sofas. It is also believed that it will emerge as the most profitable segment in the e-commerce market.