Impacts On The Retail Fuel Price In Malaysia

On September 2, 2013, Malaysia’s Prime Minister, Datuk Seri Najib Razak announced that the price of diesel and RON95 petrol would increase by 20 sen (Bridel & Lontoh, 2014) joining neighboring Indonesia to threaten investor confidence besides curbing in subsidies (Chong, 2013). There was a 20 sen price incremental to 2 Ringgit per litre for diesel and the new price for RON 95 is RM 2.10 per litre from RM 1 (Lim, 2013). “The hike was to prevent financial leakage and misappropriation of the subsidised fuel,” said Tun Dr Mahathir Mohmad, reportsBernama (Phung, 2014). The retail price of RON 97 continued to increase by 15 sen (Lim, 2013). In November, the price of RON 97 had gone down to RM2.75 per litre from the existing RM 2.85 per litre (Lim, 2013).

On 9th September, the price of RON97 dropped by 10 sen to RM2.75 per litre. (Lim, 2013). Royal Malaysian Customs Department senior assistant director Ishak Daud toldSin Chew Dailythat there is an addition of 80 to 85 zero-rated items. Prime Minister Datuk Seri Najib Razak announced that diesel and LPG will be exempted from the Goods and Services Tax (GST) taking effect in April 2015 (Tan, 2014). The prices for RON 95 petrol and diesel will slightly increase by 20 senon 2 October, announced by the Ministry of Domestic Trade and Consumer (Sze, 2014). The Sun reported that Political party PAS urged for an increase in price for both petrol and diesel, to allow petrol station operators compete with each other (Lim, 2014). Theprices of petrol and diesel were indicated to drop until January of next year (Lee, 2014).

In short, the graph in 2013 shows there’s an upward trend for Ron95 and diesel where there’s a rise in 20sens on 3 September. However, the fuel price for Ron97 fluctuates between a low of RM2.70 and a peak of RM2.90 before ending at RM2.75 at the end of the year. In 2014, there was a plateau in fuel price for Ron95 and diesel from January to September and then it increase gradually. For Ron97, the fuel price rises since January but then fell gradually after June. 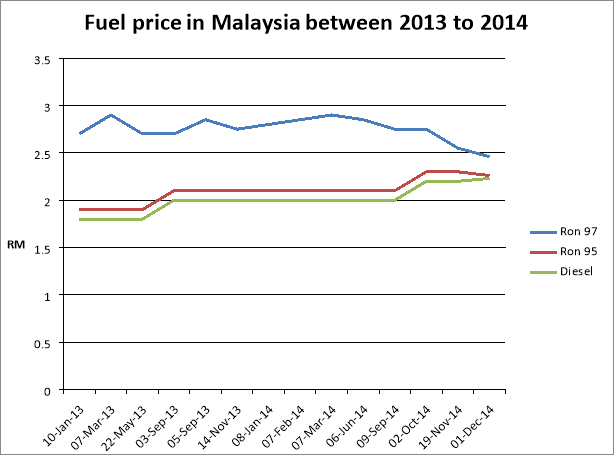 Demand and supply of crude oil

The world’s biggest economies such as the United States, consumes most oil in the world. The other world’s largest oil consumer includes Japan, Canada and South Korea (Gethard, 2008). However, the country that plays the biggest role in oil consumption is China. In 2013, China surpassed the United States becoming the world’s largest importer of crude oil as they took up one-third of growth in the global demand (Eia.gov, 2014). As China is currently a dynamic and fast-growing economy, China’s demand and usage of oil grows rapidly. The development of the country’s economy can be seen in China’s increasing number of factories and growth in number of people driving cars (Wagner, 2008). As China economy starts developing rapidly only these recent years, their oil reserves are not as much compare to other developed economies like the United States who had reserved oil for many years, thus China’s has extensive demand for oil from the global market. This increased demand has contributed to the rise of global crude oil price which has indirectly raise retail fuel prices in Malaysia.

Organization of Petroleum Exporting Countries (OPEC) is a body that has great influence over the worldwide price of oil which compriseof 12of the world’s largest oil producing nations (Gethard, 2008). Since there is a shortage of the worldwide oil production, OPEC as the biggest oil supplier reduces the amount of oil contributed to the world market and manipulate the selling price of oil per barrel. Besides, political conflicts in Libya sustains its crude oil production further leading worldwide oil supply to decrease (Batovic, 2014). With uncertainty of supply, countries compete with each other for crude oil supply and this rising demand increases the price of crude oil. The global market now has to pay at a higher price for the same amount of oil. As the cost of purchasing crude oil price increases, the Malaysia government increases the retail fuel price to the citizens.

Because the world crude oil price is set in US Dollars, the conversion of world oil price into Malaysia ringgit changes every day in the foreign exchange rate market. Suppose there is a fall in Malaysia’s ringgit against the US dollar on the world currency exchanges, Malaysia has to pay more to purchase the same amount of fuel from the global market. Example the increase from US$1.00 = RM3.50 to US$1.00 = RM3.75 indicates a depreciation in Malaysia dollar. As the cost of purchasing crude oil increases, this implies citizens have to pay more for the same amount of fuel too. The foreign exchange rate is constantly monitored by the Malaysia government before determining the retail price of fuel. Therefore, the retail fuel price often fluctuates.

The changes in retail price of fuel depend on the provision of subsidies by the government. If the government provides subsidies for fuel such as the Ron95 and diesel, the price is cheaper compare to the price of Ron97 which is not subsidies. In 2013, MYR 24.8 billion (US$7.9 billion) was allocated to fuel subsidies. The government argued that the subsidy reduction would save at least MYR 1.1 billion (US$349 million) by the end of 2013 (Lee, 2013). The cost saved in subsidies would be channeled into the BR1M welfare fund, said Prime Minister Najib Razak (Lam, 2013). By doing so, 20 sen was increased in the price of RON 95 and diesel starting on 3 Sept of 2013. In brief, the absence of subsidy causes retail fuel to rise in Malaysia.

Low oil price results in the savings cascade down into the rest of the economy in form of cheaper prices. Consumers will hence have more disposable income to spend (Parry & Kemp, 2012) leading to higher purchasing power. Besides, individual who drives car can save the cost for car petrolmonthly.

High oil price causes consumers to have less disposable income to spend especially those with a lower income. After barely consuming the necessities such as groceries, there will be not much money left to afford the luxuries, for example, travelling with family and friends.

Falling oil price brings negative impact on the mining industry, for instances those extracting oil and natural gas or constructing the pipelines to move those commodities. For producers, cheaper prices mean either less profits or even losses. Thus, oil producer will supply less oil to the market until oil prices rise back.

If a person is required to pay more for oil, delivered goods and others, less will be left over for discretionary spending by the consumers (Parry & Kemp, 2012). Buying a new home is such type of discretionary expenditure. Hence, the producers of the housing will supply less as the demand from consumers had fall. Besides the housing producers, other sectors are also affected. As fuel is needed for transportation to deliver goods and services, higher oil price will affect the delivery sector as transportation fee is higher. Not to mention, oil producers may use this opportunity to charge a higher price on fuel to gain more profit as well.

As oil producers are taxed by Malaysia government, when oil prices are lower, government revenues will drop. There is always measure to be taken to diminish the damage. Government can save money by reducing or removing oil subsidy. Through this, government can spend the money on other area like education, welfare of the society or development of infrastructure for the economic growth of Malaysia.

Inversely when oil price is higher, the cost to build or maintain infrastructures will be higher as materials, labors, and other costs needed to build or repair infrastructures are higher. Fuel consumption for the transportation of these materials also leads to higher expenditure of the government. As government spends more money on this area, they will have to cut back expenditure on other areassuch as health care and education expenses (Parry & Kemp, 2012).

In conclusion, the demand and supply for crude oil, foreign exchange rate and subsidy provided by the government affects the retail fuel price in Malaysia. When oil price is low, government gain less tax revenue, producer gain less profit and consumer have more spare money to spend, where they might afford luxury goods after purchasing necessities like groceries. When oil price is high, government gain more tax revenue, producer gain more profit and consumer have less spare money to spend. If the producer loses and not gaining profit, employees might get fired, causing them to be jobless and have less money for consumption.