Economics has evolved from just the study of money to the study of how a nation is run. Every political and economic decision is carefully scrutinized upon the flexibility of the economic theory. Economics as an entity is at a crossroads because the sole purpose of its existence is for the propagation of human life.

The greatest myth of all time is that economists try to be non-partisan when in reality they have their own partialities and thoughts. It is difficult to study a topic without developing an opinion and understandably economists are no exception. Economics is very subjective and not a homogenous subject; rather a series of conflicting ideas over many key areas.

The surge of the economic mainstream has oscillated over few centuries, much like a business cycle does.

The science of economics is largely acknowledged by economic historians to have begun possibly skipping past some other trifling paradigm shifts by the Scottish philosopher Adam Smith. Classical economics, also called classical political economy, was developed about 1750 and lasted as the predominant school of economic thought until the late 1800’s.

The Wealth of Nations and Inquiry into the Nature are commonly used as the formal beginning of Classical Economics. Adam Smith is recognized as the mind behind the Classical Economics while his near successor, John Stuart Mill is regarded as the synthesizer of this school of thought because he established the methods of the school such as such as the “Poor Laws” and the “Corn Laws”.

Nonetheless, Great economists such as Jean-Baptist Say, James Mill and David Ricardo later improvised methods and said to be the major force in piloting this school of thought in the age of Capitalism.

Over a period of time, it progressed and was swayed by Mercantilist doctrines, the early stages of the industrial revolution and classical liberalism. This also happened in the year of the American Revolution. Hence, Adam Smith shaped the foundation of what is universally referred to as classical economics.

For Adam Smith and most of other classical economists, economics was a subdivision of moral philosophy. Their economic science was erected on an ethical base and was not hermetically impenetrable from moral questions of right and wrong.

Classical economics encompasses on both the propensity of markets to move towards equilibrium and on unbiased theories of value. The approach is decisively one of laissez-faire and a strong trust in the effectiveness of free markets to generate economic development. Markets should be left to work because the price mechanism acts as a powerful ‘invisible hand’ to allocate resources to where they are best employed (Reynolds, 2014).

The classical thinkers’ emphasized that the value is determined mainly by scarcity and costs of production. Macro-economically, Classical economists take into assumption that the economy would constantly return to full-employment level of real output over an automatic self-adjustment mechanism. Thus, the fundamental principle of classical economics is Self-Regulating.

After more than a century of dominance as the predominant economic thought, Classical economics as the major school of economics ends with the “Marginalist Revolution” and gave the rise to Neoclassical Economics in the late 1800’s.

Adam Smith is often celebrated as the originator of capitalism or modern economics. While it is true to some extent but this portrayal is both dangerously misleading and exaggeratedly simplistic.

The current dispute on Adam Smith’s legacy is picking up steam while tumbling against Liberal, Labor and Conservative luminaries on both sides of the aisle.

According to some researcher, it is true that only a few distinct books have had as much influence as his “Causes of the Wealth of Nations” and “An Inquiry into the Nature”. His accounts of the division of free trade and labor, self-interest in exchange, the limits on government intervention, price and the overall structure of the market, all suggest the moment when economics evolutions to the “modern”.

However, “The Wealth of Nations”, as it is commonly called, is not a book on economics but on “political economy”, an extensive concoction of political science, philosophy, economics, history, sociology and anthropology. Most people think of him as the archetypal free-marketer. But Smith is often misquoted.

Adam Smith has shaped economic dimension of the Industrial Revolution and also transformed economics into the character of a social science with the publication of “The Wealth of Nations” book dated 1776. The roles of the laissez-faire structures are 2 components of a grander theory of social history and human interaction. These books were a work which set to end the Mercantilism era being a political and economic doctrine.

While Adam Smith acknowledged value as both value in use and exchange, he emphasized largely on value of exchange. Initially, like many of his predecessors, Smith essentially concentrated on labor but when he started to expand his theory to include an advanced economy where value of commodities can be measured by “the quantity of labour which they can, each of them, purchase or command” (Smith, 2014).

Views of Adam Smith are still being used to describe today’s economies after nearly two and a half centuries of time. In today’s era, the thoughts that most economists use in explaining progresses in international economy are thoughts acquired by Smith himself. Smith’s concept became notable when wars in Europe ended and the world trade significantly improved.

Smith enunciated what he saw – the evolution to a market economy in England. Adam Smith’s ultimate contribution to the materialization of capitalism is his articulation of what he dubbed “the invisible hand.” The invisible hand defines how the quest of self-interest leads to the finest outcome for society as a whole and economic specifically. 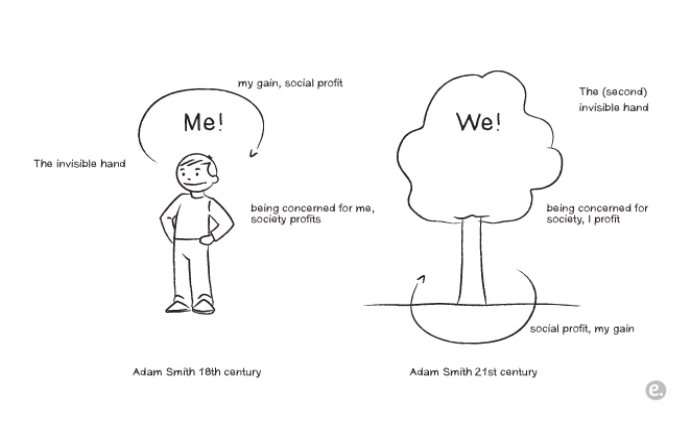 The fundamental elements of capitalism that originated from Adam Smith:

David Ricardo was one of those erratic people who accomplished both remarkable success and lifelong fame.

Ricardo momentously gained noticed among economists over the “bullion controversy”. He wrote in 1809 that England’s inflation was due to the Bank of England’s tendency to issue banknotes excessively. Ricardo gave systematized, classical form to the growing science of economics in the 19th century. In a nutshell, Ricardo was an early advocate in the quantity theory of money, or monetarism as it is known today.

David Ricardo upheld that the economy largely moves towards a stoppage. Hence, his analysis is entrenched in an improved version of the labor theory of value. David Ricardo projected a bleak future for capitalism.

To Adam Smith, society looked composed and harmonious, but to David Ricardo, society was an intensely competitive. As for staunch capitalists, Ricardo saw them as ceaselessly seeking profits but affianced all the while in an aggressive competition with other capitalists.

Of greater importance, however, was Ricardo’s theory of wages. While not called as such in the text, this theory has been labeled the Iron Law of Wages — which states that wages must remain at the subsistence level. This level, according to Ricardo, is labor’s natural price — the income which is necessary for the worker to exist. By applying the doctrine of laissez faire, Ricardo argued that wages should be left to free competition and should never be controlled by government interference. Capitalists agreed with his theory.