For the past two decades the Australian economy has performed extraordinarily in contrast to the global economic conditions during this period, and in the context of Australian economic growth since the 1950’s (Fenna, 2013). For example, since the 1990 recession the Australian economy experienced a sustained period of growth while enduring three major international economic disruptions including: the 1997 Asian financial crisis; the 2000 “dotcom” bubble burst; and the 2008 Global Financial Crisis (GFC). This performance is largely underpinned by significant increases in productivity during the 1990’s where productivity efficiency expanded a full percentage point (Parham, 2004); an outcome that was not shared by most member countries of the Organisation for Economic Co-operation and Development (OECD) during the same period. Further advancements in the promotion of trade and investment continued this sustained growth through the 2000s (Stevens, 2011).

This period of growth, however, did take some time to build momentum. The severity of the recession in the 1990s resulted in high unemployment and low inflation that spanned several years as the Keating Government struggled to address these challenges (Di Marco et al., 2009). This recession was not isolated to Australia and was experienced by many advanced economies resulting in a marked slowing in the global economy. To combat this challenge, the Keating Government adopted an expansionary fiscal policy to stabilise the economy following the 1990s recession. Expansionary fiscal policy involves increasing government spending or decreasing taxes to directly drive an increase in aggregate demand (Hubbard et. al., 2013). As a core component of aggregate demand is government spending, an increase in spending will shift the aggregate demand curve to the right in the short term as illustrated in figure 1.

Subsequently, Keating’s Labour government went into the 1996 elections with Government debt at a high of 18.5 per cent of GDP and a continuing budget deficit (Di Marco et al., 2009). 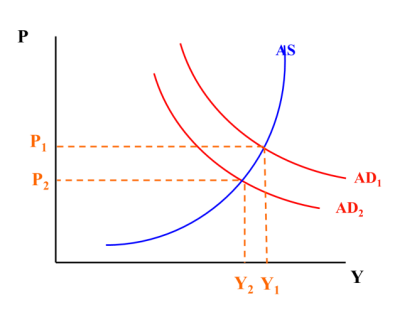 A key focal point during the 1990’s was the significant improvement in productivity within the Australian economy, which is largely considered the backbone to the past two decades of success (Parham, 2004). Parham (2004) concluded that there were six stylised facts: Labour productivity (LP) and multi-factor productivity (MFP) or productivity efficiency accelerated strongly by around one percent; LP acceleration was due to increased efficiency (MFP); the shift in MFP begun in the 1990’s; from an international perspective Australia moved to be one of the OECD frontrunners for the first time; productivity acceleration bypassed the manufacturing sector at an aggregate level; and growth in labour and capital investment was well above long term trend. In essence, the Australian economy attained a significant investment in human capital through decreasing unemployment, as illustrated in Figure 2, and a more educated workforce which combined brought about significant productivity efficiency gains (Barnes & Kennard, 2004). This surge in human capital was coupled with a strong investment in technology which contributed to further productivity efficiencies, and a more open market through relaxation of trade barriers (see Figure 3) and independent monetary policy governance (Parham, 2004). As a result the economy became more efficient at producing goods and services as illustrated in Figure 4 which increased aggregate supply. The increased and more educated workforce tended to drive wages and direct cost of inputs up which in turn increased disposable income and therefore also increased aggregate demand.

From 1996 onwards, the Howard Government adopted an initial contractionary fiscal policy with a clear focus on reducing Government debt through a reduction in spending (Fenna, 2013). The Howard government also sought to build upon the efforts of the Keating government and continue to significantly improve fiscal policy and transparency, as evidenced by the introduction of the accrual accounting framework and introducing the Charter of Budget Honesty Act 1998. Furthermore, the Howard government also spearheaded the independence of the Reserve Bank in setting monetary policy.

This contractionary policy, however, was short-lived by virtue of the fruitions of the investments in productivity, openness in trade, greater independence of the reserve bank and stricter monetary policy (Bell, 2004). The Howard Governments achievement of a balanced budget shifted fiscal policy to focus on the maintenance of modest but steady surpluses and progressing government assets sales as it focused on eliminating Government debt (Fenna, 2013). In essence the Howard Government need only ensure that it spent within its means which were plentiful.

The Rudd Government, on the other hand, came into office at a time where: the country had the lowest rate of unemployment in 30 years; the economy was experiencing strong economic growth; the budget was in surplus by about $20 billion; and the Commonwealth was one of very few countries in the world that had net government savings of around $45 billion as opposed to net government debt (Garnet and Lewis, 2010). While the Rudd Government touted there plan to continue the actions of the Howard era to live within its means, however, the GFC brought about a significant turn in events that required a significant change in fiscal and monetary policy.

The GFC, originating from the United States in 2008, spurred from a loose regulatory environment which fostered poor credit standards, high levels of lending including up to 110% of the asset value, and subsequently asset price bubbles (Garnet & Lewis, 2010). Public debt had reached unprecedented proportions and these “sub-prime” mortgages were being re-packaged and sold as financial assets to many parts of the world. As the inescapable defaults began to occur, this sent a shock wave through the global economy quickly eroding consumer confidence which had a significant reduction effect to demand thus impacting supplier outputs and the relative cost of goods and services. Firms producing goods or services quickly saw profit margins erode thus resulting in the need to reduce cost or risk of outputs quickly which typically resulted in reductions to the workforce and increased unemployment. As such disposable income was reduced further exacerbating the erosion of consumer confidence and hence the crises spiralled. The global economy quickly found itself in a marked downturn which in a number of modern economies resulted in negative growth for two successive quarters – the global economy was in recession (Garnet & Lewis, 2010; Rudd, 2009; Fenna, 2013).

The Australian economy, fortunately, experienced only one quarter of negative growth which allowed it to avoid a technical recession (Garnet & Lewis, 2010). Prudent regulatory frameworks and fiscal policy measures introduced through the Keating and Howard Government, and the prevailing strength in growth of the Australian economy reduced the risk of exposure to the fallout of sub-prime mortgage. In addition, the Rudd Government also quickly adopted an expansionary fiscal policy by developing a stimulus package aimed at significantly increased Government spending to offset the anticipated effects of the GFC. The reserve bank also took an expansionary monetary policy position by quickly reducing the cash rate to generate a successive fall in interest rates to spur consumer spending and investment, while protecting net exports. A key contrast to the Rudd Government’s approach to that of Keating and Howard, was that a significant proportion of the increase in government spending was simply a cash handout to citizens that arguably was difficult to measure in terms of the benefit it served the economy (Fenna, 2013). It is clear that retail spending was buffered through the cash handouts, however, reports suggest some of these handouts were used to funds activities that did not directly instil growth in the economy such as paying off existing consumer debt or purchasing imports as consumer stook advantage of favourable exchange rates.

The Rudd Government also included investment in infrastructure and job support programs as a key focus of its stimulus package; however, this investment was met with mixed success (Garnet & Lewis, 2010). Programs such as the home insulation or “pink batts” program and the Building the Education Revolution “School Halls” program resulted in disastrous outcomes including wasteful spending, incapable of delivering job growth targets and also resulted in deaths due to the rushed delivery that put program outcomes first, and quality and safety standards second.

The end result of the Rudd government’s tenure was a budget deficit of $55 billion in June 2010 or 4.4 per cent of GDP – a deficit not seen in four decades (Garnet & Lewis, 2010). Notwithstanding the fact the impact of the GFC could arguable not have been avoided, the question remains as to whether the Australian economy could have weathered the GFC given its strength coupled with appropriate monetary policy adjustments to the cash rate alone, as a means to maintain within the 2-3% GDP target set by the Reserve Bank as its key instrument for measuring the state of the economy. Conversely, like could be said as to whether the Rudd governments “cash splash” will have a positive long run effect on the economy given the failure to significantly invest the majority of the stimulus package into productive purposes such as infrastructure or human capital investment, like the Keating and Howard Government had done prior.

What is clear, is that the Australian economy remains strong as underpinned by prudent regulatory controls, open markets, monetary policy independence, and a significant increase in productivity efficiency that has spanned the past two decades.