Forecasting in general is the process of estimating the future value of a variable. Forecasting is an extremely complex activity that could influence the setting up of an organization. Forecasts of macroeconomic variables are also crucial to many agents of the economy and that include Central Bank, commercial banks, investors, speculators, government, policy maker and individual which includes household. For individuals, economic forecast helps them connect to the economic affairs as they will get brief and fair ideas on how the things are going to be in the future. As the business environment is constantly changing, forecast could help company to foresee the future which is important in enabling the management to change operation at the right time in order to reap greatest benefit. Forecasting also plays an important role especially for Government strategic planning and when it is required to do certain long term projects and evaluation of the economy.

This study attempts to forecast the GDP of Sarawak which is one of the states in Malaysia. Forecasting is a process of predicting or estimating the future based on past and present data. The objectives in this study are to forecast the Sarawak GDP, to examine the determinants of Sarawak GDP to estimate the forecasting accuracy of the forecast models. The factors considered include export in which according to the theory of Economic-Led-Growth (ELG) hypothesis, inflation rate (consumer price index) in which according to the theory of Fisher effect, import and state government expenditure in which are important components of GDP. Forecasting could help anchor the expectation of the firms and households which could help financial institution to become more effective in fulfilling the demand of the individual and businesses. Forecasting also plays an important role especially for Government strategic planning and when it is required to do certain long term projects and evaluation of economy.

The history of modern Sarawak is closely related to the adventures of an Englishman, James Brooke.

In 1941, Sarawak was occupied by Japanese forces but it was subsequently ceded to Britain after the war and became a British Crown Colony in early 1946 (Sarawak Government, 2014). Sarawak joined Malaysia in 1963 and today observes a democratic system of government.

. South China Sea separated Sarawak from Peninsular Malaysia with a distance of 600 km and directly joins the state of Sabah to the northeast where the Sultanate of Brunei also forms a double enclave (State Planning Unit, 2014). Inland, the boundary between the State and Kalimantan Borneo is formed by the watershed dividing those rivers flowing in a southerly direction into the Java and Celebes Seas (State Planning Unit, 2014). The detail is shown in the map below:

Natural resource is the key driving force of Sarawak economy. Her wealth was being built up from exportation of natural resource mostly in the form of timber, oil, and gas since independence in 1963. In 2011, 50 % of state output came from the industries that involved in the extraction and processing of these commodities. Emerging business of Sarawak is exportation of crude palm oil. Competitive advantage of Sarawak in this economically-significant segment of the primary sector is guaranteed through the commitment of both private and public resources. Production of crude palm oil in 2011 exceeded well over 2 million tonnes and it was exported primarily to China and India. Premium grade peppers and rubber are other important products of Sarawak. Sarawak GDP is contributed approximately 40 % by services sector. In terms of monetary contributions, trades and hospitality is as crucial as finance/insurance, and utilities/ transport/storage/.communication.

The trend of Gross Domestic Product (GDP) in Sarawak from 1980 until 2012 is shown in Figure below: 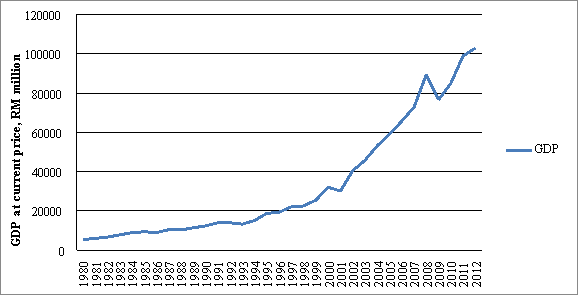 After a slight decrease in GDP because of Asian Financial Crisis, the policy makers managed to bring Malaysia out of the financial crisis and GDP grew rapidly until RM 32006 million in 2000 but it started to drop again to RM 30140 million in 2001. The decrease in GDP from 2000 to 2001 is as a result of the global economic downturn. An economic downturn suggests the rate of economic growth is slowing down and possibly entering into recession. A downturn is part of the economic cycle. After that, GDP of Sarawak climbed up speedily until RM 89387 million in 2008 and it began to drop sharply until RM 76663 million in 2009 because of the global financial crisis that happened in 2008. According to McKibbin and Stoeckel(2009), the collapse of Lehman Brothers in September 2008 induced a wave of fear around world financial market which in turn causes the banks virtually stopped lending to each other. McKibbin and Stoeckel (2009) also mentioned that difficulty in borrowing had caused the falling in investment. Nonetheless, the policy makers still managed to recover the economy after 2009. Thus, GDP in Sarawak increased from RM 76663 million in 2009 until RM 102887 million in 2012.

Barbier (2003) stated that environmental resources should be viewed as important economic assets, which can be called natural capital. Sarawak consist a lot of natural resources which have a very high contribution towards the Sarawak GDP. According to State Planning Unit (2014), since independence in 1963, Sarawak has built up her wealth on the exportation of natural resources, largely in the form of timber. Sarawak Government (2014) also stated that Sarawak is rich in both metallic and non-metallic mineral resources which offer huge potential for value-added processing. Vast reserves of natural resources promise great opportunities in the field of biotechnology, and forest resources may yet prove to be a major source of discovery (Sarawak Government, 2014).

Apart from that, Sarawak Government (2014) also mentioned that Sarawak is suitable for development due to its large tracts of land. It is easily accessible from the major cities of the world, Sarawak can be reached within three hours by air from Hong Kong, six hours from Japan, four hours from Australia and two hours from Indonesia and about an hour from Singapore and Brunei (Sarawak Government, 2014). The State is emerging as a very profitable investment hub offering cost-competitive advantages with good transportation linkages because it is located at the heart of the Asia-Pacific (Sarawak Government, 2014).

GDP can be influenced by many factors. It cannot be simply predicted without doing a research. Therefore, this study in the end attempts to solve:

The aim of this study is to forecast the Gross Domestic Product (GDP) of Sarawak.

The specific objectives of the study are:

Other than that, the predicted future GDP can also alert federal and state government if there is going to be slump in the Sarawak GDP. Then, governments can make well-informed decision or take precaution in order to reduce the negative effect of economic downturn in the future.

Forecasting the Sarawak GDP is particularly important for businesses with long production cycles. The longer it takes to source raw materials, prepare them for production, manufacture the products, market and sell them, the more the overall economy can change. These enterprises will be impacted significantly if economic downturn happens. Economic forecasting helps to protect businesses against loss by anticipating how to respond to economic downturn in advance.

1.6 Structure of the study

This paper is organized into five chapters in which Chapter One will briefly discuss on the background of Sarawak, problem statement, motivation of study, objectives of study, and also significance. Then, Chapter two contains literature review of the theoretical studies of forecasting GDP and determinants of GDP and also review on previous empirical studies. Chapter three will describe on the research methodology used in the study. Later, Chapter four explains and reports the result of the empirical analysis. Lastly, Chapter Five concludes the study conducted along with some policy recommendation.