The global Gross Domestic Product is the collective gross national product of all the countries in the world. 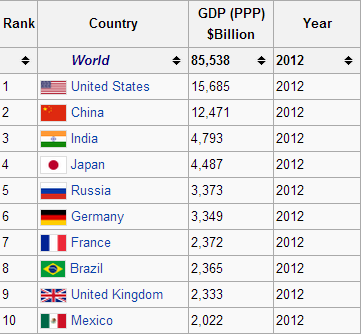 Not all useful activities are included in Gross Domestic Product. For instance, unpaid work, (that performed in the home or by volunteers) and black-market activities are not included since they are difficult to measure and value accurately. That means, for example, a salary paid for a domestic servant in a house will be added to Gross Domestic Product, but if the same work is done by the mother of the family, it will not be added.

Gross Domestic Product is gathered/ measured at current prices or nominal prices. Therefore, with regards to the matter of comparing, one cannot compare two periods without making modification for inflation. To figure out the real Global Gross Domestic Product, its nominal value must be adjusted to consider price changes to allow us to see whether the value of output has gone up because it is being produced additionally or simply because prices are greater than the previous year.

Environmental concerns have come to the head of almost all aspects of life, as individuals get to be increasingly concerned with washed-out of natural resources and polluted environments. These concerns are regularly not taken into consideration when measuring the force of an economy. The Gross Domestic Product, which is an estimation of both the consumption and production within a country, is not intended to envelop these natural issues. Subsequently, green Gross Domestic Product has been at the front line of efforts to marry economic and environmental concerns.

There are not less than 3 methods available to figure out the costs for natural resources and environmental corruption which could be used when making changes to arrive at a green Gross Domestic Product from global Gross Domestic product. The so-called;

Alternatively, one could use estimates of the ability to accept such harms in the environment. The issue is that for each of the methods used for calculating degradation and depletion, the response will generally be quite different, bringing about altogether different estimates of a green Gross Domestic Product. There is no remarkable or correct answer to the question of what is the value of green Gross Domestic Product.