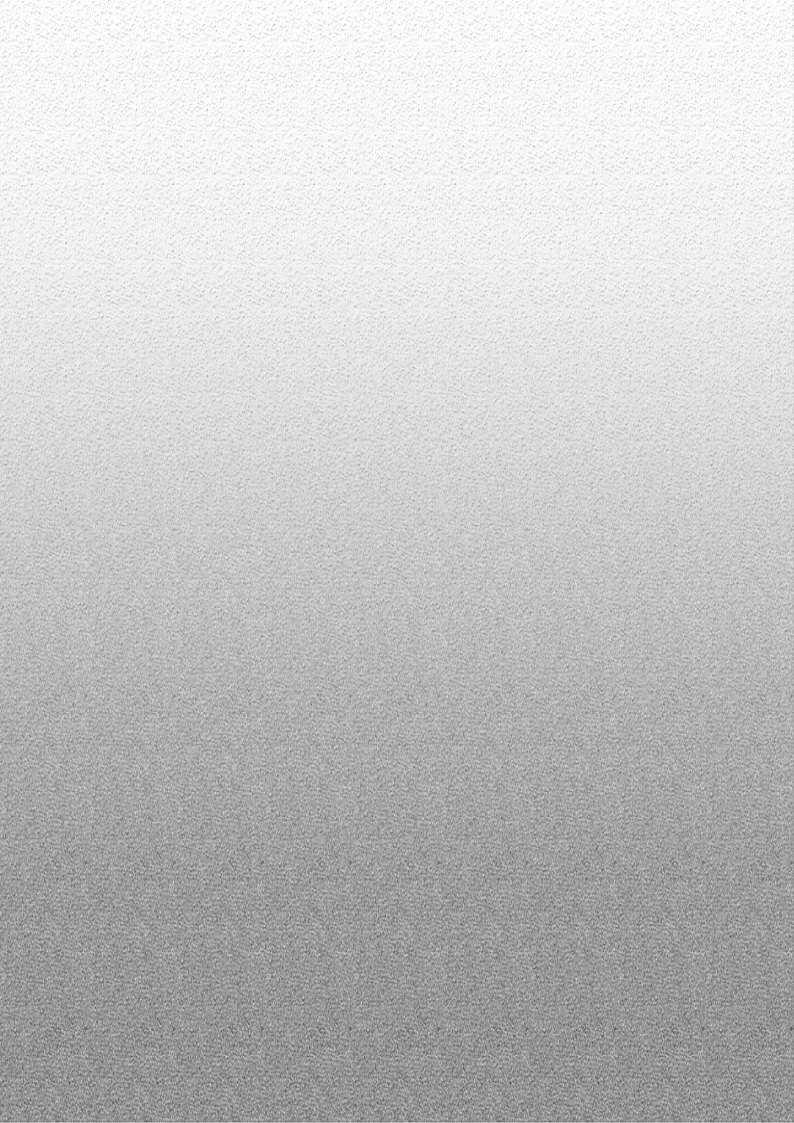 THE PURPOSE AND LIMITATIONS OF GDP2

THE GENUINE PROGRESS INDICATOR AS AN ALTERNATIVE FOR GDP4

The strengths of the Genuine Progress Indicator5

The Limitations of the Genuine Progress Indicator7

Gross Domestic Product (GDP) is an economic measure of a nation’s total income and output for a given time period. It is used to measure the relative wealth of nations, and the overall growth or decline of an economy.

The Beyond GDP debate discusses how developing indicators can go beyond the limitations of GDP, including such factors as environmental and social. This paper aims to discuss the advantages and limitations of GDP, and thus how The Genuine Progress Indicator can provide a more inclusive measure of the changes to a nation’s economy.

“GDP was not intended to be a measure of well-being” (Dimas, 2009). It is an aggregate measure of output, measuring the consumption of goods and services sold on established markets. Comparing cross-country data can indicate human welfare distribution. In addition, it is often used to rank countries in order to issue aid payments.

Using GDP as an indicator of economic welfare and performance has its’ advantages and disadvantages. GDP is a well-respected, clear assessment of the wealth of a nation’s economy. The measurement is relatively uncomplicated to calculate from official government figures. Moreover, the inclusion in GDP of goods and services delivered by the government contributes to the welfare of a country.

However, GDP has several major limitations which restrict its’ use as a measure of well-being. Firstly, National Accounts only publish aggregate economic data for households per capita, ignoring distributional issues and hiding income inequality. For example, the big bonuses given to those at the top of companies appear as increased income for all, so no distinction is made between the two.

Additionally, GDP measures income produced but not how much income is received within a country. This has its issues, since some income may go overseas. For example, in Ireland, 15% of primary income is transferred overseas, an increase of 8% since the early 1990s (Deutsch Bank Research, 2006). This perceived increase in Irish GDP in the 1990s did not benefit the country itself, but foreigners.

Secondly, GDP only counts monetary transactions, omitting other activities that people value, such as leisure time. Therefore changes in real income could be understated. Long working hours and short holidays needed to produce the economy’s output restrict opportunities for leisure, affecting worker health and family lives. Other unreported activities include ‘nonmarket production’, individuals doing jobs for themselves, or helping others. In addition, volunteer work, which is not included, can lower GDP due to the hours citizens spend working for free when they could be paid to do another job. These activities satisfy peoples wants be do not appear in statistics.

Thirdly, GDP includes the replacement of depreciated capital. This capital consumption amounts to between 10% (UK and Ireland) of GDP (Deutsch Bank Research, 2006). However, this depreciation does not increase citizen welfare. GDP does not measure the benefits of the environment or the costs of its destruction. Expenditures to repair damage increase GDP, therefore GDP can rise twice from environmental destruction: natural disasters boost economic activity due to costing the market transactions of the negative effects, and then the monetary value is added from cleaning up the problem.

Fourthly, GDP can grow due to inefficiency, as the measurement does make the distinction between the qualities of goods traded, as consumers may buy multiple low-quality products instead of a one-off purchase of a high-quality good, increasing the amount spent. Furthermore, new products often replace older goods, so it doesn’t show the inclusion of new goods traded on the market.

Finally, the ‘black economy’ is also omitted. This is where unrecorded cash transactions are not included in GDP statistics, and could be legal activities undertaken to avoid taxes, or illegal acts such as drug dealing which satisfy people’s needs, thus increasing personal well-being.

Section 3: The Genuine Progress Indicator as an Alternative to GDP – 600 words (currently 808)

An alternate indicator for the United States is the Genuine Progress Indicator (GPI), a revised version of the Index of Sustainable Economic Welfare. This accounts for the positives and negatives of economic growth, providing policy-makers with a more accurate measurement of the overall health of the economy. With twenty-six indicators, it combines economic, environmental and social factors into one framework. Just some of these indicators are discussed below. 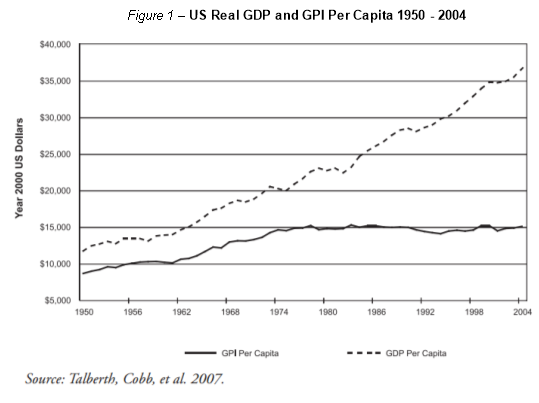 Figure 1 shows the GPI per capita compared to GDP per capita. It clearly shows that GDP grows steadily in per capita GDP from 1950 to 2004 at an annual average growth rate of 3.81%, whereas there is stagnated growth in GPI at only 1.33% growth rate over this time period. This is due to income inequality and environmental degradation (Talberth, Cobb et al. 2007).

The GPI builds on the GDP measure of progress in several ways. It nets the positive and negative results of economic growth to examine whether or not it has benefited people overall. Where GDP looks at personal consumption expenditure in monetary value of production, the GPI is interested in the welfare associated with this consumption. This data is collected from the same set as GDP, with deductions made for costs to society.

Firstly, income inequality is not taken into account in the GDP calculation. The GPI is adjusted for how the whole population shares any increase in a countries income. GPI is adjusted upward when a greater percentage of a nation’s income goes to the poor, and downward when the majority goes to the rich.

Secondly, although GDP does measure service sector childcare in monetary terms, it doesn’t account for housework and at-home parenting. GPI incorporates social aspects of well-being for tasks such as leisure time and housework. Estimating the market value of domestic and personal services is unreliable and subjective; therefore the cost is derived from the amount that a family would have to pay to hire someone else to do equivalent work in their home.

Moreover, GDP gives the illusion that the nation is getting richer. GPI aims to correct the critical omission of volunteer work in the GDP calculation. With the population working longer for greater output, they are leaving little leisure time. Therefore, GPI discounts the cost of leisure time that is lost with increased economic output.

Thirdly, as quoted by Joseph Stiglitz, “GDP tells you nothing about sustainability”. GPI factors in the costs of resource depletion, environmental degradation or pollution (water, air, and noise). These factors are discounted as a cost to society. GPI encourages long term planning for sustainable growth of an economy, rather than short term measures which may increase GDP at an expense of damaging the environment.

Fourthly, GDP can grow due to inefficiency, therefore the money spent on consumer durables is treated as a cost, while the value of purchases are seen as a benefit. Superior, longer lasting goods are viewed positively, whilst inferior goods are viewed negatively.

Secondly, the GPI accounts for underemployment: it includes those who are regularly unemployed, discouraged from work, involuntary part-time or constrained by other personal factors. The GPI treats each hour of underemployment as a cost and therefore a burden to society.

In addition, where GDP increased by increased output on say a farm, the loss of services to that farm are uncounted so GPI estimates the value of services that are given up when this area is converted to other purposes. Furthermore, GPI accounts for the negative economic effects as a result of natural disasters which include the costs of increased depletion. This is achieved by assigning costs to carbon emissions and placing it as a cost to society.

3.2: The Limitations of the Genuine Progress Indicator

The non-economic variables such as leisure time and the environment are difficult to assign an economic value to, due to the cost being subjective. These measures are based upon self-reporting by individuals, which enables life-satisfaction to be calculated. However, well-being can also be an objective measure, with attempts to capture life-satisfaction factors by looking at the disposable income of citizens.

A main issue with calculating GPI is that it “relies on estimates which limits its’ validity, its comparability across studies and ultimately its policy relevance” (Schepelmann et al. 2010). This inability to predict trends could make the GPI methodology vulnerable to favourable selection of indicators by different nations.

In conclusion, both GDP and GPI have a use for economic accounting. GDP is widely accepted as a measure of economic progress, whilst GPI is an additional measure to give greater knowledge of real economic welfare development. As a policy, GDP is simpler, and provides less subjective results unlike GPI which puts a monetary value on normative ideas.

GDP is a crucial input for monetary policy, with the aim to keep inflation low by keeping output close to its long-run trend. However, having a policy that incorporates the monetary aspects alongside the well-being of citizens is crucial to monitor and evaluate progress in society. Therefore, implementing a policy such as that of the GPI would enable this to be achieved.

Firstly, measuring social progress is based on subjective measures of well-being. The subjective well-being approach validly measures utility if comparison between answers is possible. Respondents must be able to evaluate their life on a numerical scale.

Reducing unemployment would increase GPI due to costing each hour of underemployment. This would increase well-being and happiness of citizens due to reducing the negative effect for both those directly affected and for other citizens. Cross-sectional studies have found that well-being is positively correlated with income in the short-term; therefore boosting individual income through employment could increase well-being. Ferrer-i-Carbonnel (2005) found that the larger an individual’s own income is in comparison to the reference group, the happier the individual is, whereas a poorer individual’s well-being is negatively influenced by a lower income. Clark and Postel-Vinay (2007) found that workers feel more secure in public sector jobs, influencing job satisfaction.

GPI would be further boosted by taking steps towards reducing carbon emissions and environmental pollutants. This in turn would increase citizen well-being. Happiness data has been used to calculate the monetary equivalents of noise pollution (Van Praag and Baarsma, 2005).

Therefore, in conclusion, having both specific indicators such as GDP for monetary progress and more composite indices that can be communicated to the public in a clear way will enable progress of nations to be monitored and progressed.

Commission on the Measurement of Economic Performance and Social Progress, “Survey of Existing Approaches to Measuring Socio-Economic Progress”

Deutsch Bank Research (2006)“Measures of Well-being: There is more to it than GDP”