In the attached article in the references, it is shown that Greece has succumbed to a low employment rate since the financial crisis that has affected them in 2007. It is reported that Greece has reached an all-time high unemployment rate of 28% in November 2013 and has not been improving as of late till the point in which the article was written in February 2014. The article also states the contrast of Greece’s unemployment rate to the average rate of unemployment in the euro-zone, which is more than double in percentile. In this assignment, I will be discussing the unemployment issues that currently impact Greece.

Factors affecting unemployment in Greece will be discussed. The precise economic definition of unemployment consists of unemployment falling into one or more of these factors, without work even after actively searching for a job for four weeks, waiting to be called back to a job in which he or she has been laid off, or waiting to start a new job within 30 days.

Lastly, we will be looking at the policies implemented by the government of Greece to curb this problem of unemployment. 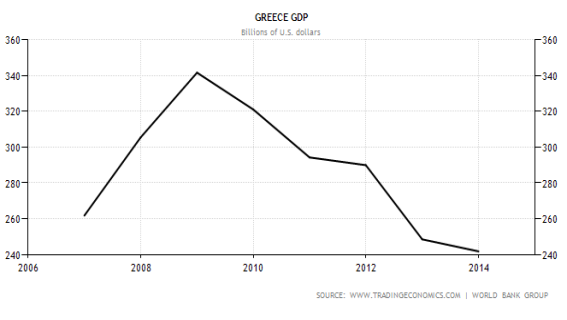 What Does GDP Indicate in Greece’s Economy?

Based on the graph attached above, Greece can be seen to have been going through a severe period of recession stemming from the global financial crisis in 2009. This also indicates that Greece is dipping towards the trough of their business cycle. In a recession, there is a slowdown in production output of the country. This is because the output per worker or productivity falls steadily causing an increase in production cost per product. This will in turn induce a dip in profits of firms which will inevitably reduce their labour force to compensate with their reduced output. This has caused a severe increase in unemployment rate from the crisis. Such unemployment caused by the recession is broadly labelled as cyclical unemployment. However, structural employment will also be affected as there will be businesses shifting out of Greece as it is not profitable to retain their business there, causing loss in job opportunity and employment.

What does unemployment rates indicate in the Greece Economy?

Policies the Greek government has undertaken to reduce unemployment

While the origins of the significant recent rise in long-term unemployment are predominantly cyclical in nature, targeted policies to assist the long-term unemployed are likely to be necessary even once jobs recovery is underway. In the first place however, labour market and social policies have a key role to play in preventing the risk that the sharp jump in unemployment becomes persistent by promoting a quick reintegration of jobseekers into employment and enhancing their skills to enable them to move into more productive jobs when the recovery gathers speed (OECD, 2009).

Greece has stepped up efforts to assist the unemployed since the start of the recession. According to the latest Greek National Reform Programme (2014), the focus of employment policy is on a more efficient use of resources and reallocation of resources, in order to both improve labour market outcomes, and in particular youth labour market outcomes, and to enhance the economic sectors with growth prospects. The main rationale behind the policies currently being implemented by the public employment service (PES) is the boosting of job creation and job retention mainly through the reduction of non-wage cost. For this purpose, the PES has launched a series of policies. These policies have the double benefit that they encourage the access of unemployed persons to the labour market and discourage undeclared work.

There is also a package of measures that is intended to facilitate the access of young people and newcomers to the labour market. These include: (a) a work experience programme in the private sector (b) a programme subsidising enterprises for the recruitment of young graduates up to the age of 35 years, (c) counselling and career orientation services, aiming at enhancing employment prospects, (d) programmes to enhance youth entrepreneurship, and (e) vocational and educational training programmes in priority areas of economic activity (construction, tourism, new technologies, etc.).

Basically in response to the newspaper article and current macroeconomic research, it shows that despite Greece’s policies to improve the unemployment rates, it has not improved much since the global financial crisis. In conclusion, the Greek economy faces two major challenges. The first is the need for strong economic recovery to increase job opportunities, and create constant job expansion mainly to facilitate the youth unemployment. The second is the need for policies to address labour market problems to increase the efficiency in matching of job seekers to new job openings and to assist in the labour market adjustment of the long-term unemployed, so as to prevent the high increase in unemployment from becoming structural.