At the present time, ideal for the most people is to live and work within an economic structure which may provide to them the prospect of steady employment, fairly steady prices and a high quality standard of living. According to data from the year 2008 during the worldwide economic recession, the International Labor Office declared that global unemployment extended more than 200 million people, 7 percent of the global workforce was looking for the job, which reached the highest level on record. It is usually recognized that to achieve low levels of unemployment most governments concerning about using the policy instruments to restructure. However, the types of policies are depending on what type of unemployment they address.

Increasing the aggregate demand and economic growth rate is the efficient way to lead unemployment decrease. The government will need to pursue an expansionary fiscal policy, which may include decreasing the taxes and increasing government expenditures. The Government can increase its own expenditure level. This “fiscal pump-priming” straightly increases aggregate demand and can make a significant influence on national income equilibrium. The government might increase current expenditure (for example aggrandizing the payment in the part of education and the health care service) or multiply expenses on capital schemes which improve the stock of capital (such as expenditure on new infrastructures, new infirmaries or other major public service projects). Continued economic growing offers a stage for more jobs to be found in the economy. Besides, a declining in taxation may result of increases buyers’ disposable income and should enhance household spending. The effect may be better if taxes are decreased for individuals on lesser than average incomes. These tax-payers are probable to spend a larger percentage of their disposable income. In short, lesser taxes increase disposal income and therefore assistance to increase consumption, giving rise to higher aggregate demand. As aggregate demand increased, Real GDP will also increase. If the company needs to produce more, there will be an escalation in demand for employees and therefore lower the unemployment. 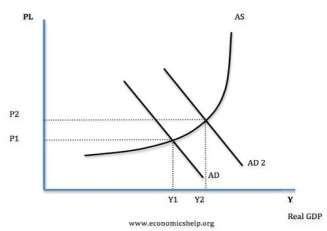 With the demand side policies government would diminution interest rates of monetary policy. A reduction of monetary policy through lower interest rates stimulates the demand for credit, decreases saving and increases consumers’ actual ‘effective’ disposable incomes; all of which will improve total consumption and demand. During the marginal cost of investment drop down, the low interest rate may also inspire firms to invest. This increases aggregate demand and should benefit to GDP growth and reduce demand deficient unemployment. However, in some cases, as lower interest rate may be useless in improving demand. In this situation, Central Bank may option to quantitative easing. This is an attempt to increase the money supply and increase aggregate demand.

In this situation, governments can sanction policies to attempt to reduce frictional and structural unemployment. In order to reduce the frictional unemployment, includes offering guidance and facts for job-seekers and providing unblemished and transparent information on available jobs and workers. For instant, the employment of the Job Seeker’s Allowance in 1996 confirms that workers are enthusiastically looking for work as the payment of benefit is reliant on them demonstrating this at periodical interviews. This can be in the form of free career counseling and job boards or job fairs. The government can offer convenient facilities to intensification availability and flexibility. For example, providing daycare may allow part-time or non-workers to conversion into permanent jobs, and public transportation may extend the number of jobs accessible to somebody without a car. The government may also fund publicity campaigns or other programs to combat bias against certain types of workers, jobs, or locations. Furthermore, public policy can disentangle structural unemployment through job training, education and other motivation strategies to equip workers with the skills firms demand. For example remembrance unemployed steel workers to have basic I.T. skills which may support them catch work in the service sector, or a worker who was trained in an outdated field, such as a textile worker who lost his job when spinning was mechanized, may benefit from unrestricted retraining in another field with strong demand for labor.

In another word, everything may have double-side. Issues of unemployment numbers and associated problems are frequently raised when discussing the economic policy performance of a government. The clearest trouble for the government policy is that the economic objectives “trade off” against each other. For example, policy instruments that governments want to reach the objective of lesser inflation often inflict a result of higher unemployment. Limitation the money supply may falling the value of expenditure, and increase interest rates, resulting in many companies going to insolvent, with a lot of people lost their jobs. Controlling governing outlay as part of monetary policy can also increase unemployment in the public segment.

Governments would have no macroeconomic difficulties if market forces in the economy spontaneously directed to full employment, with unwavering prices and a fast economic development. Nowadays, the world economy is still depressing from the stresses of the longest crisis, over 100 million people are unavailable of work in the G20 countries, with unemployment at generally high levels in several of them. Government policy always look for to diminish unemployment by providing information, training, facilities and other programs to impact the unemployment. In the future, to deal with the unemployment problem, governments still face a very long and difficult way to go.