Introduction In order to perform a gap analysis of Pakistan’s mineral policy development environment with other mining favorable countries, we require to formulate certain criteria. These criteria will determine that only those countries are selected whose environment is similar to Pakistan.

Mining operations represent an economic activity in which many decisions involve risk and uncertainty. There are many activities involved in current mining projects. Tasks include exploration, resource calculation, human resource planning, drilling, transportation, and closure, and in all of these the mining company must deal with local people, local and national governments, national and international standards, and even international organizations, both governmental and nongovernmental. Many of the risks in a mining project are well known before operations begin, and the prudent organization will analyze and account for those risks before the investment decision is made. These major risk factors may be conveniently divided into five categories:

Investment risk may be analyzed and quantified in several ways. Control of risk is one of the prime responsibilities of a company’s senior managers. Those individuals often consider all the data and information provided by experts from inside and outside the company, including geologists, engineers, financial analysts, lawyers, and others, and then make their decision after a discussion of the risks, based on their combined experience and intuition. This approach relies on the experience and instinct of experienced individuals, and can be difficult to quantify. The decision methods may or may not be repeatable.

In the more systematic approach suggested here, a similar group of senior managers again analyzes and discusses data provided by experts; then each manager makes a numerical assessment of the risk to the project in each of several areas, as defined in a list of risk areas. The numerical assessments from each individual are then compiled to provide an overall quantification of the risk associated with the project, which is used as the basis for the investment decision. This approach still allows for input based on individual experience and intuition, but at the same time captures the individuals’ assessments of risk numerically, and can thus be more repeatable. Table 2.2 shows a risk assessment matrix used in the past by K Company

All Political Risk Surveys carried out in 2012 highlights that the political instability and weaknesses in different developing countries refrains the international investors to undertake any financial venture. The investors see the political instability as a major factor for any medium to long term investments in any country, as regards to the short term investments which are still on a rise in the developing countries (2012 world investment and political risk). Regulatory changes due to change of governments and/ or policy is the most adverse concern by the foreign investors which make them think twice to invest in a politically unstable country. Unfortunately, Pakistan’s political system has never matured enough to give that required confident to the investors. The recent Tethyan company fiasco is a daunting example where the supreme court over turned the company’s legal right to exploration of minerals at Riko Diq after successful completion of the reconnaissance license. The breach of contract by the host country is another concern that the international investors have before undertaking economic venture in politically unstable country. . These two political actions are also responsible for the most losses suffered by foreign investors in developing countries, according to the survey.

The question which arises here is how to rate a country for favorable foreign investments environment? Moody’s credit ratings is considered to be one of the best answers to this question. Moody’s ratings measure the capability of a country to repay its international depts. It shows the instrumental policies in place in a country that ensures that the borrowings by a country can be repaid in time or not. (Moody’s credit ratings by country, as of Feb. 2013)

To understand the credit ratings one may treat it as individual scores. These credit scores are assigned to countries and companies on it willingness and capacity to repay and meet its financial obligations. So when this rating is high there are good chances of the country to repay and conversely if the ratings are low there is fair chance of a default from the country. A complete system is in place to calculate the willingness and capacity of these obligations, and there are several rating agencies which evaluate the credit worthiness of a country. These agencies include Moody’s, Standard & Poor’s, and Fitch Ratings. In the preceding Para we summarize the credit ratings by the Moody’s to sovereign states.

Moody’s investment grades are a way to provide the investors with a gauge through which they can measure the future relative worthiness of securities of countries/ companies. Moody’s have ratings from A, Aa to Ca and C in a logical alphabetic order which are also appended by a numerical 1,2 and 3, the lower the number, the higher is the ratings. Moody’s ratings gives a recommendation about a country’s economic status and does not speak anything about the market price, but is generally regarded as one of the correct ways to judge economic and political environment related to investment in a country. Completer ratings of moody are given in the table below.

Table 1. Moody’s long-term obligation ratings are opinions of the relative credit risk of fixed-income obligations with an original maturity of one year or more.

A rating upgrade is awarded to a company/ country when it enhances its capacity to repay its depts. This generally is a positive trend and reflects a change in the economic policy of a country. On the contrary if, there is a threat or issue that may impair a country’s ability to pay its financial obligations it may face a credit rating downgrade. Some of the reasons for a possible downgrade are the Political instability; desolate economic prospects, unproductive tax collection schemes and institutions and declining economic growth. France,Greece, the United Kingdomand theUnited States are the most recent credit rating downgrades. 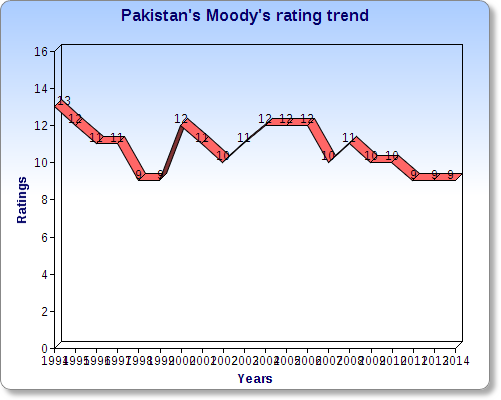 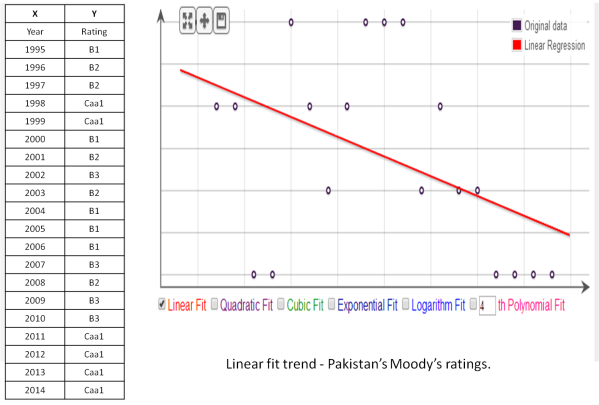 The continuous Caa1 rating and the negative outlook in last 3 years for Pakistan is due to many reasons like external loan repayment pressures, political weakness and fragile security environment. The government in Islamabad neither has been able to formulate a policy to seize the deteriorating economy, let alone restore investor confidence.