The very definition of Foreign direct investment is controlling ownership in a bussiness enterprise in one country by an entity based in another country. The collapse of the former Yugoslav Federation, Croatia and Slovenia declared independence in 1991 while paramilitary origins from Serbia occupied several Bosnia and Herzegovina towns killing civil Bosniaks and Croat. In this clash of ethnic groups, BIH was confronted with serious humanitarian and social problems in which thousands of people died. The conflict lasted (1992-1995) until the Dayton Peace Agreement was signed in Paris in December 1995 between the counterparts (Malcolm 2002). With one confederation, two entities, ten cantons in the Federation, five administrative areas in the Serb Republic, a special Brcko district, plus municipalities and local government unit presents a very complex political system in the world which conceals meaningful barriers and bureaucratic obstacles that will need to overcome (Ilgun, 2009). Many aspects of the regulatory quality reforms have stagnated over a number of years, making BiH among the least competitive economies in the Europe and Central Asia (ECA) region. To enhance the prospects of the country as a destination for foreign investment further steps were taken, especially by establishing the Promotion Agency (FIPA), privatization and incentives for foreign investors.

Foreign direct investment (FDI) plays an extraordinary and growing role in global business. It has long been recognized that the benefits of FDI for the host country can be significant, including knowledge and technology transfer to domestic firms and the labor force productivity spillovers, enhanced competition, and improved access for exports abroad, notably in the source country (Demekas et al, 2005 and Botric, 2010). Due to the low domestic savings there is need for attraction of foreign direct investment for future economic growth (Botric, 2010).The consensus view in the literature is that the benefits of FDI tend to significantly outweigh its costs for host countries (Demekas et al, 2005). There are two types od FDI: Horizontal FDI (HFDI) is market-seeking investment, aimed primarily at the domestic market in the host country, when local production is seen as a more efficient way to penetrate this market than exports from the source country, and Vertical FDI (VFDI) is cost-minimizing investment, when a multinational corporation chooses the location of each link of its production chain to minimize global costs (Demekas et al, 2005). As a result of these differences in motivation, a number of host country factors, such as market size, trade restrictions, and transport costs, can have different effects on HFDI and VFDI.

Predictable policy environment that promotes macroeconomic stability, ensures the rule of law and the enforcement of contracts, minimizes distortions, supports competitiveness, and encourages private sector development can be expected to stimulate all private including foreign investment (Demekas et al, 2005). Among the macroeconomic and political environment factors it is the political stability as the most important factor that influences investment decision. Furthermore in the case of the institutional environment, protection of investors is one of the important factors. Those can be the tax systems, lack of corruption, the ease of starting up a company, law of contract, transparency, safeguarding of property rights and efficiency of justice (Ilgun, 2009). Although Serbia and Montenegro and Bosnia and Herzegovina are slightly lagging behind the other countries, they are on a good path to make further progress in this area of reform implementation (Penev and Rojec, 2004). High political risks in the region in the past decade posed one of the greatest obstacles to FDI inflow although this varied amongst countries. Private foreign capital is very sensitive to any investment risk, so that the countries with an unstable political and economic environment are almost unattractive to private foreign investors (Penev and Rojec, 2004). After the political failure, BIH has also started a wide reaching process of reconstruction and development of its political, economic, social and legal systems of the country (Ilgun, 2009).

All Southeastern European countries, each to a different degree, need to make further efforts to simplify complex tax and customs laws and regulations, facilitate access to land and construction permits, strengthen the judiciary, accelerate the resolution of commercial disputes, and eliminate remaining discriminatory provisions against foreign investors. It is found that high unit labor costs, a high corporate tax burden, and, to a lesser extent, a high level of import tariffs discourage FDI (Demekas et al, 2005), while a liberal foreign exchange and trade regime and advanced reforms in the infrastructure sector encourage FDI (Penev and Rojec, 2004).

The role of FDI in economic growth and development is now widely acknowledged, and all countries are actively seeking to attract it. Several forms can be used for capital investing abroad: investment in a joint venture with a local firm, acquisition of a foreign firm (mergers & acquisitions) or construction of a facility (wholly owned) (Ilgun, 2009). In order to create and improve bussiness climate Bosnia and Herzegovina accelerated Economic Reform process. The aim of B&H is to eliminate legal and administrative obstacles for doing business in B&H, as well as create the most attractive business environment in the SEE (FIPA). Many aspects of the regulatory quality reforms have stagnated over a number of years, making BiH among the least competitive economies in the Europe and Central Asia (ECA) region. BiH currently ranks 131st out of 189 economies on the Doing Business indicators for 2014 (World bank). The business environment in BiH is the least friendly in the region, as it is burdened by a large and complex public administration system and layers of administrative approval authorities which increases costs (World bank).

World bank (2013) supports BiH’s business environment reforms and includes areas such as reducing the time and cost for registering a business, streamlining procedures for obtaining construction permits, and facilitating trade across borders shown in Figure 1. Based on IAB results (2010), countries tend to attract more FDI if they allow foreign ownership of companies in a variety of sectors, make start-up, land acquisition, and commercial arbitration procedures efficient and transparent, and have strong laws protecting investor interests. For instance, studies have shown that 70% of countries miss out on foreign investment due to deficiencies of investment promotion institutions in providing potential investors with accurate and up-todate information (IAB, 2010).

These policies target improving BiH’s competitiveness, helping to facilitate the country’s dialogue with the EU on accession, and promoting economic growth. The May 2014 floods are estimated to have caused around US$2.9 billion in damages and losses, the equivalent of nearly 15 percent of GDP in 2014.

Figure 1. Fastest and slowest countries for starting a foreign business. 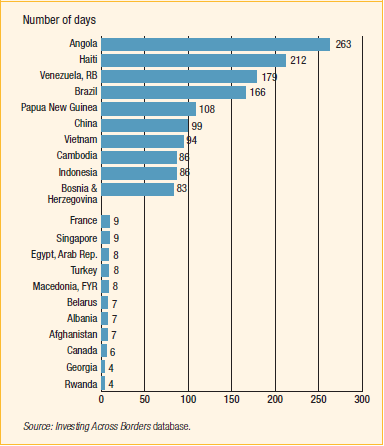 BiH is in a delicate position, caught between the “middle-income trap” (too poor to be a world-class innovator and service provider, but too rich to compete for low-cost manufacturing) and legacy issues on the one hand, and having the potential and opportunities to improve the business environment and attract more investment on the other (world bank, 2013).

The main goal of B&H is EU membership. Bosnia and Herzegovina is a potential candidate country for EU accession and B&H has signed the Stabilization and Association Agreement with the European Union, which is a step toward EU membership (FIPA, 2012). Bosnia and Herzegovina has signed the Central European Free Trade Agreement (CEFTA), creating a free trade zone with access to a large consumer market. Also,the process of negotiation to join the World Trade Organisation is underway.

Privatization in Bosnia and Herzegovina is an overall process, through which attractive investment opportunities are opened up to foreign investors in sectors such as the energy sector and telecommunications. Bosnia and Herzegovina is accelerating the privatization process for companies of strategic importance in order to increase economic growth and enhance the volume of foreign investment. The existence of free zone as part of the customs territory of Bosnia and Herzegovina, which is specially fenced and marked and where business activities are carried out under special conditions in accordance with the Law on Customs Policy of B&H and the Law on Free Zones of B&H (FIPA). Any industrial, commercial or service activity, (banking, insurance and reinsurance of property and persons, etc.), can be carried out in the free zone. The users of free zone do not pay VAT and import customs, so investment in the free zone, transfer of profit and transfer of investment are free of charge. One of the main reasons for investing in B&H is also favorable tax system. Bosnia and Herzegovina has one of the lowest rates of VAT (17%) in the region and Europe, as well as the very acceptable corporate tax rates that are also among the lowest in the region and Europe (10%) (FIPA). 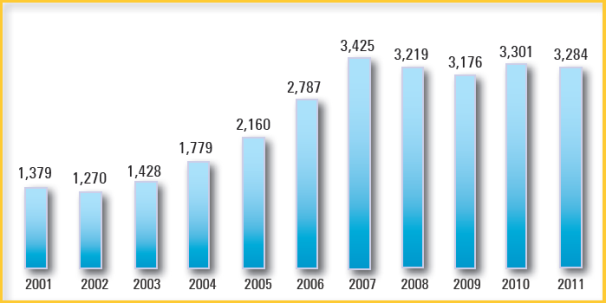 Figure 3. Flow of FDI in Bosnia and Herzegovina, by years, million € 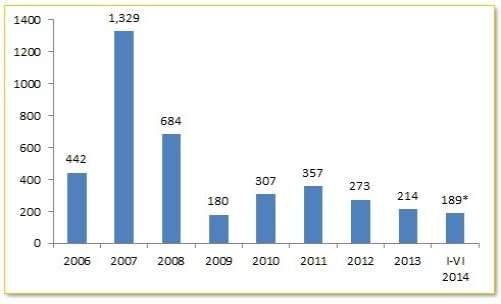 A part of the efforts aimed at attracting foreign investors, the Bosnia and Herzegovina Parliamentary Assembly adopted the Law on Foreign Direct Investments, which established political directions for favorable treatment of foreign investors and protection of their interests. Foreign investors enjoy the following benefits (APF 2009; FIPA 2012):

guarantees for protection from political risks for short term and medium term commercial transactions between Bosnia and Herzegovina companies and foreign companies, suppliers and banks.

The main advantage of FDI is its contribution to economic growth in host countries. The extent of such growth enhancing responses depends on country specific characteristics such as liberal trade regimes, accumulation of human and physical capital and macroeconomic stability (ilgun, 2009). Bosnia and Herzegovina is accelerating the privatization process for companies of strategic importance in order to increase economic growth and enhance the volume of foreign investment. BiH’s business environment reforms includes areas such as reducing the time and cost or registering a business, streamlining procedures for obtaining construction permits, and facilitating trade across borders. With the purpose of facilitating trade, creating preconditions for the increase in exchange of goods (and particularly export), the creation of a favorable environment for domestic and foreign investments, Bosnia and Herzegovina concluded certain number of bilateral/multilateral free trade agreements. Due to the good reputation and long industrial tradition of Bosnia and Herzegovina, the manufacturing sector received the largest amount of FDI (32%). A significant share of investment has been in banking sector (22%).

APF – Agency for Privatization in Federation of Bosnia and Herzegovina, (2009),