Factors Influencing The Growth Of A Nation

Analyze the major factors that influence the growth of a nation. How far the Indian Economy has succeeded in meeting the developmental challenges? Also, discuss the current political scenario in our country

QUES. Analyze the major factors that influence the growth of a nation. How far the Indian Economy has succeeded in meeting the developmental challenges? Also, discuss the current political scenario in our country.

There are various indicators that economists use to measure the economic development of a country.

There are mainly two types of factors which influence the economic development of the country. 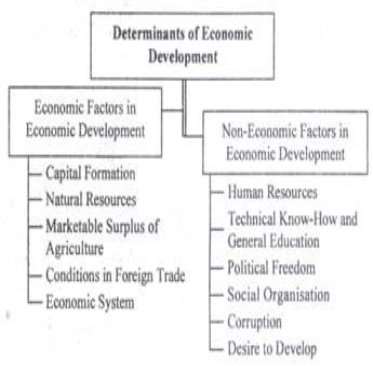 The strategic role of capital in increasing the level of production has already been acknowledged in economics. It is now universally admitted that a country which wants to accelerate the growth, has many choice but to save a high percent of its income, with the target of increasing the level of investment. Mainly reliance on foreign aid is very risky, and therefore should be avoided.

Whatever be the economic system, a country cannot think to achieve economic progress unless a certain minimum rate of capital accumulation is realized. However if any country want to make exceptionally well results, it is necessary to increase its rate of capital formation.

The term ‘marketable surplus ‘means the excess of output in the agricultural sector over and above what is required to allow the rural population to sub exist. In case a country fails to produce sufficient goods for the market, then they will be left with no choice except to import food grains which will cause a balance of payments problem in future. If some country wants to improve the impact of industrialization, it must not allow its agriculture to lag behind. The supply of farm products particularly food grains, must increase, as the setting –up of industries in cities attracts a steady flow of population.

The economic system and the historical setting of a country also decide the development of a nation to some extent. There was a time when a country could have a continuous faire economy and yet to face no difficulty in making economic progress.

From the available historical evidence, it is now very true that non- economic factors are also play a significant role in development of the country or nation. Here we attempt to explain how they create influence on the process of economic development:

Human resources are very important factor in economic development. Man provides workforce for production and if in a country labour is efficient and skilled, its capacity to contribute to growth will decidedly be high. The productivity of illiterate, unskilled, disease ridden and superstitious people is generally low and they are not able to provide any hope to development work in a country. But in case human resources remain either unutilized or the manpower management remains defective, the sample people who could have made a positive contribution to growth activity prove to be a burden on the economy. So human resource is one of the most important factors of non-economic. But to increase the efficiency of the workforce , the working conditions should be improved and harmony should be established in industry.

It is never been, doubted that the level of technical know-how has a direct effect on the speed of development. As the scientific and technological knowledge advances, man discovers more and more sophisticated techniques of production which continuously increase the productivity levels of the country. Since technology has now become highly sophisticated and advanced, still far greater attention has to be given to research and development for further advancement. So that we can give & invent a better technology than others to improve & raise the development of the nation & also respect in the eyes of other countries. Therefore we have to depend on the technology & education for the development of nation.

Political freedom is very important if any country want to accelerate or want to follow the path of economic development. Like in the history, one learns that the processes of development and under­development are interlinked and it is wrong to view them in isolation. We all know that the under-development of India, Pakistan, Bangladesh, Sri Lanka, Malaysia, Kenya and a few other countries, which were in the past British colonies, was directly related to the development of England. England always exploited them and takes away all the money and wealth which is very important for any country to grow. Dadabhai Naoroji has written a book ‘Poverty and Un-British Rule in India’ which explains how the Britishers had taken away the wealth of India when they had ruled India for 100 years. Therefore the Britishers were the major cause of the increase in poverty in India during that period, which in turn arrested the economic development of the country. So it is very important to take decisions those politically quiet rights because it had a great impact on the country.

Social Organizations are also responsible for the development of the nation. Public participation is necessary

Corruption is a main obstacle in the path of economic development of any nation. Corruption is basically the black money which is not recorded anywhere with government & goes in the pocket of a person who is taking bribe for any type of work. There will be no tax he has to pay on that money. Due to this government expenditure is decreasing & country is not able to progress continuously. So we should not take or give bribe if we want to see the nation making development. We have to always stop others who are doing this type of things & also we can spread awareness among people about corruption.

I think invention is the need for necessity, so we have to always desire and thinks that what we can develop through the limited resources we have. The main step in the commencement of