Exchange Rate Of The Australian Dollar Against The Us Dollar

The exchange rate of the Australian dollar against the US dollar 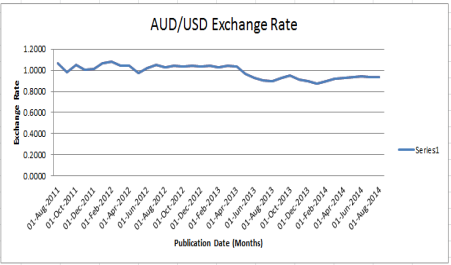 Since the 2008-9 global financial crises, Australian has been progressively recovering from the recession; there’s been slightly increase and decrease since then, however according to the figures by the (Reserve Bank of Australia’s (RBA), 2014), the exchange rate of the Australian dollar against the US dollar, although has been fairly steady over the last 36 months though there have been rise and fall in the exchange rate. Some of the causes of these activities will be discussed.

An exchange rate plays an important role in a country’s level of trade, which is critical to most every free market economy in the world. Nevertheless exchange rates matter on a smaller scale as well: they impact the real return of an investor’s portfolio. Therefore we look as some of the major forces behind exchange rate movements.

There are many factors that influence the value of the Australian dollar compare to other currencies. These include:

These declines in the exchange rate are triggered by various factors of which will be discussed.

Thus, the movement identified in the figure will be discuss

The paper will focus mainly on identifying the movement in the exchange rate graph (above) and explaining the cause of the movement.

According to Rate Detective (2014), RBA has been consistent with the interest rate of 4.75% since November 2010 to 2011, nonetheless in November of 2011 the RBA cut its official interest rate by 0.25% to 4.50% for the first time in two and a half years. The RBA made its second interest rate cut in a row in December to 4.25% though the interest rate was unchanged at 4.25% from December 2011 to April 2012. The steep decline in the exchange rate movement from February to August 2013 was possible triggered by the 0.25% cut from 3.25% in November 2012 to 3% in December 2012 which was at par with the lowest rate in April 2009 during the height of the global financial crisis. The 3% rate was steady up till May 2013 when RBA cut interest rate from 3% to 2.75% this puts the current rate to the lowest it has been so far since RBA began setting monetary policy.

The cut in the interest rate is caused by the continuing weak performance of Australia’s mining, manufacturing, and services industries (Rate Detective, 2011).

Garrett (2013) states “if and when US monetary policy returns to more normal, the interest rate differential between Australia and the US will go down. The less encouragement people have to put their money in Australian dollars, the lower the “Aussie” dollar will go.”

One of the foremost influences on the Australian dollar has been the terms of trade. For instance, increase in the term of trade as a result of a rise in the prices of commodities provides an expansionary urge to the economy through an increase in income.

Over the past decade China has contributed greatly to the sharp rise in Australia’s terms of trade. China’s economy is vital to Australia as it rely on the Chinese economy for exports and import. Hence if there is a decline in the Chinese economy it also affects Australia as it rely heavily on China demand for exports of iron ore, and coal, Therefore since the new shift happening in China and the rest of Asia which is these economies are no longer growing at the Frantic pace that Australia have become used to over the years, the Australian dollar has dropped as a result of this. For instance, exchange rate peak in the second half of 2011 as a result of the peaked in the term of trade in Australian and it was prediction to continue to weaken slowly over the next few years as the global supply of bulk commodities surges (st.george, 2013). The sharp decline 2013 was triggered by the weakening commodities industry and prices fall. After holding up during the second half of 2013, iron ore and coal prices have fallen sharply since the beginning of 2014. The decline has been due to weaker demand for steel, a period of negative sentiment around China’s economic growth prospects, as well as rising global supply, in particular due to recently built capacity coming on line from Australia. (Atkin & Connolly, 2013)

As discussed, the movement in the exchange rate of the Australian and US dollar over the last 36 months was caused by various factors of which two were discussed. However other factors not discussed are Relative inflation rate, Growth in real GDP and much more. Interest rate and terms of trade were two of the key factors in driving the movement in the exchange rate which is the reason they were discussed. However of the two discuss, commodity and term of trade is probably the foremost factor in driving the exchange rate in Australia since Australia predicted the mining sector to be the driving force of Australian dollar and has strengthen the Australian dollar in 2011 at the peak of the mining boom. Although the mining industry has not performed as expected due to the Asian economy slowing down as has toughen the Australian economy into making necessary cuts in the interest rate.