To start with, let us find what international trade is all about then we will figure out how this could be good for economies and what are the attempts that were made in the last decade to bring down those trade barriers.

Free trade is purchase of goods or services between two countries without any restrictions like tariff, duties or quotas. There are two theories related to free trade and the first of that kind was by Adam smith who postulated that trade between two nations happens on ‘absolute advantage’ . Law of absolute advantage states that when one nation is more efficient than the other trading nation in producing commodity one but less efficient in producing commodity two, then both nation should specialize on the product that gives them absolute advantage and export that to their trading partner (Salvatore 2004). However, it doesn’t highlight on the opportunity cost that it incurs in taking absolute advantage.

The above tabe clearly shows that the UK has comparative advantage over EU in TV as it has got 1/10 th of car as oppurtunity cost compared to 1/6th in EU . Similarly, EU has advantage over UK in Cars and its oppurtunity cost is 6 TVs comparted to 10 TVs in UK. As EU is ready to trade above 6 TVs and UK ready to buy anything less than 10 TV then there should be an equlibrium for international prices for car (Begg and Ward 2009).

International trade is propelled by comparative advantage but what is the source behind that? Differences in climate, geography and natural resources, difference in factor endowment and difference in technology are the few sources behind that (Krugman and Wells 2005). The key advantages of free trade are explained below

In order to embrace the benefits of free international trade, world countries decided to drop their trade barriers like custom duties, quotas, subsidies on local products, etc.,. The advent of free trade materialized post Second World War and in the year 1947, 23 countries together formed General Agreement on Tariffs and Trade (GATT) which was later replaced by WTO (World Trade Organization) on 1955 with 159 members till date. Following WTO numerous trade blocs were formed based on regional groupings and they are NAFTA, APEC, EU and G20.Following paragraphs will detail about the bilateral, regional and multilateral trade attempts made to reduce the trade barriers.

Multilateral trade agreements are made between many countries at a same time. Example of that is DDA (Doha Development Agenda). It is the latest round of trade negation with the WTO members. It was officially launched in November, 2011 with an objective of achieving major reforms on global trades by reduction in trade barriers and revised trade rules (WTO, n.d c). The talks were primarily centered on opening of agricultural markets as trade barriers for agricultural products are higher than other products. Developing countries apply high tariffs to protect their local farmers. After numerous rounds of talk, DDA collapsed on July 2008 as developed countries failed to agree the developing countries access to each other market (BBC 2011).

Bilateral trade enables exchange of goods and services between two countries and enables preference of tariff and quota free trading. An example for that is, in November 2007, Japan signs bilateral trade agreement with ASEAN (The Association of South East) which was totaled more than 160 billion a year. It was said, trade barriers will be removed within 10 years for six richest members of ASEAN and up to 18 years for four poorest countries. This pact excludes export of agricultural products like beef, rice and other dairy products to Japan due to powerful farm lobby (Burton 2011).

World’s largest free trade agreement which is yet to materialize between US and EU, started 12 years back. Issue here is the farm trade, as EU imposes high sanitary barriers to American beef exporters and banned hormone-fuelled beef and pork. In response, US banned EU beef on the ground of mad cow disease scare a decade ago. Many businesses on both the sides of Atlantic are looking forward for the success of this pact to reduce the tariff and to smooth the regulatory regimes (Chaffin and Politi 2013).

2 (b). What negative effects might free international trade have upon countries’ economies, and why countries adopt protectionist policies?

Countries exhibit protectionist measures though there are advantages in the international free trade. The arguments behind restriction of trade are as follow – to protect infant industries, to reduce dependency on goods with little potential, to protect industry of national interest, to prevent dumping of imported goods, international cartels, to eliminate monopolize of foreign products, to avoid global fluctuations , to prevent harmful imports , to safeguard environment (Sloman 2007 , Begg and Ward 2009). As part of trade protection, countries raise barriers by imposing tariff, quotas, subsidies and embargoes to name a few .The brief descriptions of all the above mentioned arguments against international trade are explained in the following paragraphs with suitable examples.

Infant-industry argument: If a country feels for any particular product it produces has potential competitive advantage but it’s still at the initial stage of development, it tries to protect that by trade barriers. Protection from foreign competition will help these companies to grow and to become efficient (Salvatore 2004). An example to support this argument would be, Ghana which has immense natural wealth but suffers from poverty and unemployment due to influence of international policies and lack of protection for its infant industries. It was highlighted that lot of developed countries earlier had higher tariff’s to protect their infant industries which made them grow stronger (Spy Ghana 2013).

Reduce dependency of material with less dynamic potential: Developing countries generally export raw materials and food stuff which are primaries and experience inelastic price changes. It leads to slow growth and it doesn’t drive growth as promised by international trading. Outcome of this would be they are handicapped from exploiting the advantage of manufacturing the product out of those raw materials and exporting it which has higher price elastic demand (Sloman 2007). European countries try to deprive Nigeria to develop value addition sector of Cocoa by imposing high import taxes on products of cocoa whereas raw cocoa are encouraged at zero import duties (This Day Live 2013).

Protecting industries of national interests: A country might support one particular industry as it feels that to be very important for its economy and it doesn’t want to be dependent on any other country for the same at the later stages. Government patronages those industries by providing incentives and make them efficient (Begg and Ward 2009). Example: Japan patronages its agriculture industries from trading though it was pressurized by America to drop off the tariff on its agricultural products as part of Trans-Pacific-Partnership (TPP) agreement which Japan about to sign. Currently Japan imposes 800% tariff on imported rice and the agriculture industry receives the state patronage of 1.1 % of GDP (Harner 2011).

Dumping of Goods: Dumping is the export of commodities at very low cost compared to its cost domestically. It results in driving out the foreign producers out of business abroad and establishes monopoly power. There are two types of dumping and they are ‘Predatory dumping’ in which prices are lowered in abroad for a temporary period until it drives out the competitors and achieves monopoly. The other type is called ‘Sporadic dumping’ in which sale is occasional to unload the unforeseen or temporary surplus. Normally countries counter-attack this practice by imposing antidumping duties to offset the price difference (Salvatore 2004). Recently, Vietnam imposed antidumping duty of 14.38 % on one of the Malaysian cold-rolled stainless steel coils exporter following the POSCO VST’s claim of reducing their domestic business (FMT 2014).

International Cartels: They are the group of suppliers of a product who are located in different countries and agreed to restrict output and export of commodities in order to increase their total profits. Practicing these cartels is illegal domestically in most of the countries (Salvatore 2004). Recently 21 Japanese auto suppliers caught in a price-fixing and bid-rigging scandal as they conspired to fix prices of instrument panel clusters sold to US from April 2008 to February 2010. These companies involved in this scandal were charged with ransom of $4.56 million to consumers and executives of those firms were sentenced to prison ranging from 14 to 19 months (Shepardson 2014).

Monopoly of imported goods: Tough competition by imported goods drives domestic players out of the market and gives monopoly. This results in increase in prices resulted due to misallocation of resources. Governments try to protect country from such occurrences by adoption of strategic trade policy by which it provides comparative advantage through trade protection, subsidies and government-industry programs in the high technology fields or industries that are crucial for future success. Classical example for the strategic trade policy would be, Japan’s semi-conductor breakthrough in mid-1980‘s which was earlier dominated by US in the 1970’s. Japan’s ministry of trade and industry targeted this industry, financed in research and development and fostered government-company cooperation to protect it from foreign completion (Salvatore 2004).

In-line with the above arguments on protectionism, tariff, quotas and subsidies are methods for government to collect revenues, protect jobs in the domestic market and to increase production. Of the three methods, tariff is the most important type of trade restriction. It’s generally expressed as fixed percentage of value of the traded commodities and called as ad valorem tariff. Find below graph that details the impact of tariff on imported goods and producer, consumer surpluses. 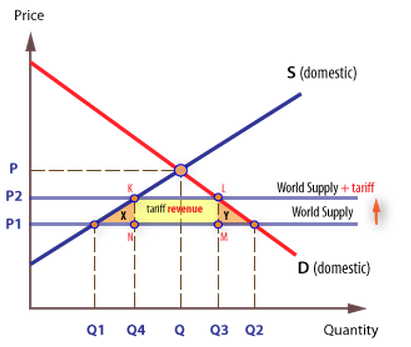 Quotas: It’s the non-tariff based barrier which restricts the imports quantitatively. It’s mainly used to protect agriculture and to stimulate import substitution of manufactured products. An example for quota is , China allows 894,000 tons of cotton imports with a duty of 1% and currently it has increased its sliding scale tariff from 14,000 yuan to 15,000 yuan per ton to clear its fiber stockpiled in domestic reserves (Economic Times 2013).

Subsidies: It is the benefit given by the government to particular industry in the form of cash or tax reduction to make production cheaper for the domestic industry. To fund subsidy for an industry, government spreads taxation across the tax payers.

Introduction of subsidy pushes the supply curve to the right from UKS1 to UKs2. The price to the consumers remains the same but the import falls from QD to QD1 where the domestic supply increase from QS to QS1. (Begg and Ward 2009)

Thus, negative effects of free trade have been discussed with a highlight of different trade barriers that countries impose to save domestic industries from import.