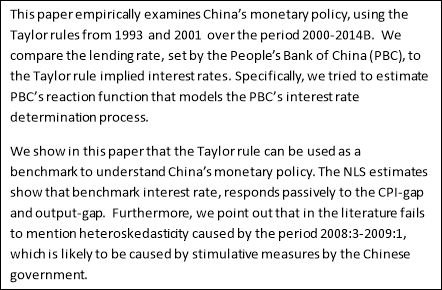 Many central banks’ conduct of monetary policy, including the Federal Reserve, Bank of England, Bank of Japan, the Bundesbank, and European Central Bank, has been examined according to the Taylor rule (McCallum 1993, Judd, Rudebusch 1998, Gerlach, Schnabel 2000, McCallum 2000, Nelson Edward E 2000) Although the research about the monetary policy conduct in major industry countries has proliferated, little English written literature can be found on the monetary policy analysis, using the Taylor rule, in transition economies and emerging market economies, like China.

The lack of studies in the literature could reflect the obstacles we came across in conducting our research. In the first place, the monetary policy in a transition and emerging market economy often lack consistency. This may be due to the fact that the economy in these countries is under reconstruction or major reform. Indeed, many of these countries are in the course of major market-oriented reforms. Moreover, the financial market in those economies is far from fully developed. These practical obstacles could prevent scholars from doing research in these areas. This paper we tried to overcome these boundaries and therefore this paper’s main purpose is to estimate how well the Taylor rule estimates China’s monetary policies, during the period 2000:1 – 2015:1.

The remaining includes 5 sections. Section 2 will provide a brief overview of the literature. Section 3 describes the data used. Section 4 will provide the econometric model used. Section 5 covers the results obtained. Section 6 will conclude this empirical paper with a summary.

The data used in our analysis are quarterly, which span from 2000:1 to 2015:1. The PBC has used, and is still using, multiple policy instruments which include benchmark interest rates, required reserve ratios and refinancing banks. In China, interest rates decisions are taken by The Peoples Bank of China Monetary Policy Committee. The PBC administers two different benchmark interest rates: one year lending and one year deposit rate. In this paper we focus on the lending rate for three reasons:  the two rates are highly correlated  data about the latter rate is more available, and because of the fact that it has been continuously used as an instrument since 1986.

Real GDP, potential real GDP and the output gap We obtained the real GDP data from the National Bureau of Statics of China (NBS), which is the accumulated GDP per quarter in 100 million current Yuan. This data was converted into quarterly GDP by subtracting the accumulated GDP in quarter 2 from the GDP quarter 1 etc. We estimated the potential real GDP by using the linear trend estimate, as has been used by Ping and Xiong (2002). Since the output figures we have demonstrate potential quarter-related varied characteristics, we implemented three dummy variables.

The potential output can be based on the following equation

In accordance with equation (1), the potential GDP can be estimated using

Using this information we can estimate the output gap with the following expression:

The inflation rate used is measured by using the CPI. This CPI data can be found  consulting the database of the Federal Reserve Bank of St. Louis. Information regarding the inflation rate target was collected by reading “The Report on Plan Implementation for National Economic and Social Development of the year and the Draft plan for National Economic and Social Development of the following year”. This report  is  published annually by the State Development and Reform Commission of China. However, in this paper quarterly data is used, while the inflation targets are annual, therefore, we set the quarterly target equal to the annual target.

The Augmented Dickey-Fuller (ADF) test was used to test the variables used in the Non-Linear Least Squares (NLS) regression. The outcomes of those tests can be found in table 2.

The original Taylor rule states that the interest rate determined by the central bank can be described by Taylor (1993):

is the realized inflation as measured by the Consumer Price Index (CPI) on a quarterly basis,

is the information available to the central bank at time t,

is the inflation target set by the PBC,

the output gap. We expect the parameters

would represent an active interest rate policy towards the CPI gap, whereas

would indicate a more passive policy. Furthermore, a higher value for

would indicate a more responsive interest policy towards the output gap. The inflation rate is highly persistent, therefore

However, in reality central banks apply a degree of smoothness to the rate. In the literature a weighted average method is used which comprises of the target interest rate,

, and an error term,

. This can be summarized in the following expression:

. When (4) and (5) are combined we obtain the following definition for the Taylor rule for the benchmark interest rate,

This section presents our findings based on the Taylor rule (6) from section 4. We faced substantial heteroskedasticity in the error term. Interestingly this seemed to be due to the observations from 2008:3 to 2009:1. This period is especially interesting, since on 9 November 2008 the State Council of the People’s Republic of China announced a $586 billion (current dollars) stimulus package, before this period the PBC already cut the interest rate three times in an effort to bolster economic growth[1]. Furthermore, the PBC cut interest rates for the fourth time that year with 108 basis point, the biggest drop in 11 years, on 26 November 2008[2]. In the literature we could not found similar mentions of the heteroskedasticity issue, which causes the test statics to be incorrect and overstate precision.

increases from 0.81 to 0.92, that the output-gap(y) becomes more significant, and that the long run equilibrium real interest rate and the CPI-gap become less significant after the removal of these observations (see (7) and (8)). Furthermore, we found no serial correlation issues or correlation between variables (see table #).

). What’s more, the set interest rate shows a positively to the output gap (y). The CPI-gap and the output gap are statistically significant at the 1% and 5% level, respectively.

In this empirical paper we analysed how well the Taylor rule can describe the PBC’s monetary policy during the period 2000:1 to 2015:1. The recent developments in China’s monetary policies, lack of literature regarding our topic, and the fluctuations in macro-economic variables provided a challenging opportunity to see whether the benchmark interest rate set by the PBC is accurately described with the Taylor rule. We found that the interest rate reacts positively, but passively to the CPI-gap. What’s more, the interest rate also reacts positively to the output gap. Furthermore, all our variables were statistically significant. What’s more, we pointed out that the literature fails to mention a heteroskedasticity issue caused by the period 2008:3-2009:1. This heteroskedesticity in the error term is likely to be caused by the stimulus package initiated by Chinese government around that period. Although the PBC explicitly states that money supply is its primary monetary tool, the Taylor rule does fairly accurately describe the PBC monetary policy.

Note: *,*** denote rejections of the null hypothesis of the unit root at the 1%, and 10% significance levels, respectively.