Effects Of The Recession On The Global Economy

The effects of the recent recession on the economy of the world, with suggestions for avoiding a repetition.

The author has selected to research on the effect of the recent recession on the world economy, with suggestions for avoiding a repetition.

The author collected the information for the report through:

Research was done through many books written on the Great Recession (2008).

The author watched a few documentaries which were deeply concerned with the recession of 2008.

Many online articles were used as a part of this research.

A set of interviews was conducted by the author to understand the specific impact of the recent recession on the economy of New Zealand.

The United States Federal Reserve bank led by Mr Alan Greenspan lowered the Federal interest rates to 1% as shown in the diagram below. 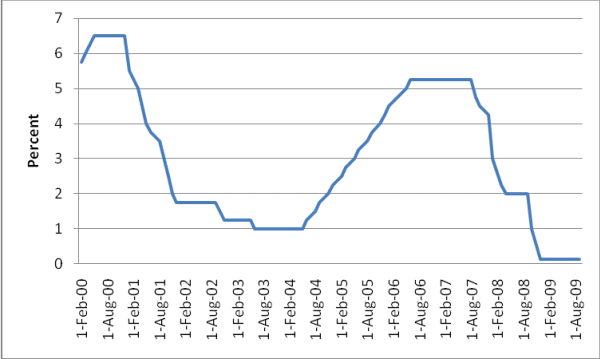 “With interest rates so low, investing in safer assets, such as US government bonds, offered paltry returns”

This factor led the world investors and the Wall Street banks to invest in other financial instruments to keep on gaining higher profits. 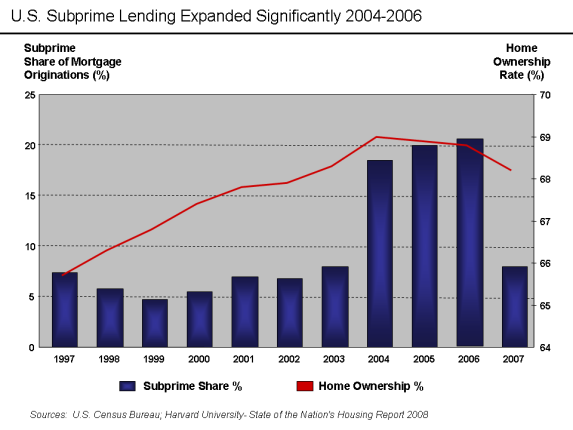 During the early 2000s the real estate business showed intense growth and the finance companies such as Countrywide Financial started giving out loans for housing to people without checking their background (job, financial status, credit history etc.). This type of lending is known as subprime mortgages opposite to prime mortgages which requires a thorough investigation of a borrowers past financial details to refrain from mortgage default in the future. This growth in the subprime mortgages can be seen in the chart below.

It can be seen clearly that the subprime share of mortgage market quadrupled from 1999 to 2006 before going down in 2007. This growth symbolises the increased demand of such mortgages by the investment banks in USA and the investors around the whole world. Also the residential property prices were rising due the high demand of the market.

“According to estimates byThe Economist, the total value of residential property in developed economies rose by more than $30 trillion over the past five years, to over $70 trillion, an increase equivalent to 100% of those countries’ combinedGDPs. Not only does this dwarf any previous house-price boom, it is larger than the global stockmarket bubble in the late 1990s (an increase over five years of 80% ofGDP) or America’s stockmarket bubble in the late 1920s (55% ofGDP).In other words, it looks like the biggest bubble in history.”

This article by The Economist clearly states the potential of the housing bubble of last decade.

“The bubble years saw an unprecedented rise in household debt, for the most part secured against inflated house valuations. In the United States, it rose by 150 per cent between 1997 and 2007, from $5.5 trillion to $13.8 trillion”

“In Britain, the increase in debt was even greater. By the end of 2007,household borrowing had reached 185 per cent of disposable incomes”

In 1933 the Glass-Steagall Act was enacted to strictly regulate the policies of the commercial and investment banks. It firmly prohibited any kind of merger between a commercial and investment bank. But this Act was infringed in 1998 with the merger of Citicorp and Travellers Group to form Citi Group paved the way for enactment of another act called Gramm-Leach-Bliley Act which completely deregulated the banks and hence gave them a greater leverage and in other words gave them the power to make more profit with greater risks.

“The main function of the Act was to repeal the Glass-Steagall Act that said banks and other financial institutions were not allowed to offer financial services, like investments and insurance-related services, as part of normal operations.”

This simply meant the banks were de-regulated and they could have as much leverage as they want. In simple terms leverage is a ration between the equity of a bank to the capacity to borrow debt.

In 2001, Iceland completely privatised its major banks like Landsbanki and Kaupthing, opening their way to enter the world market of mortgage based funds.

The enactment of Commodity Futures Modernization Act of 2000 also added to the deregulation by not regulating the derivative market and credit-default swap market. The act was authorised by Clinton administration.

“Among his (Clinton’s) biggest strokes of free-wheeling capitalism was the Gramm-Leach-Bliley Act, which repealed the Glass-Steagall Act, a cornerstone of Depression-era regulation. He also signed the Commodity Futures Modernization Act, which exempted credit-default swaps from regulation. In 1995 Clinton loosened housing rules by rewriting the Community Reinvestment Act, which put added pressure on banks to lend in low-income neighbourhoods.”

The investment banks such as Goldman Sachs, Lehman Brothers, and Bear Stearns etc. were engaged in Collateralised Debt Obligations (CDOs), a type of derivatives and they evolved CDOs to form a different kind of financial instrument known as Mortgage backed securities (MBS). This simply means the banks were buying a number of subprime mortgages from the mortgage selling companies and then bundled them together to 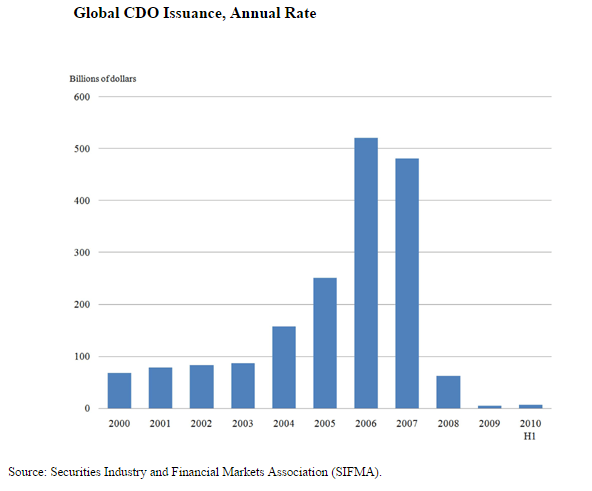 sell them globally to the investors.

The above given graph portrays the hike in global issued CDOs which peaked in 2006 above $500 billion which was below $100 billion till 2003.

Another funds that these banks were dealing in were Credit-Default Swaps or CDS. American International Group (AIG) was a leading marketer of these funds.

“In my view, derivatives are financial weapons of mass destruction, carrying dangers that, while now latent, are potentially lethal.”

The number of mortgage defaults in U.S.A. and Britain increased during 2007-09 which resulted in foreclosure of subprime mortgaged houses. An analysis if foreclosures is given below. 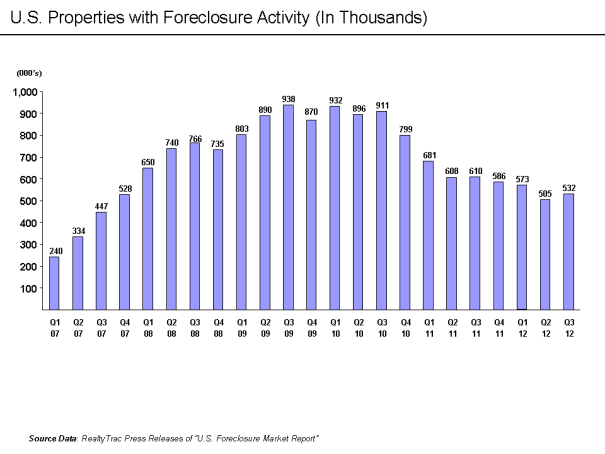 The foreclosure rate was as low as 240,000 in the first quarter of 2007 and then this rate regularly increased touching the peak in 2nd quarter of 2009 with 938,000 mortgage defaults and hence foreclosed houses in USA Putting in other terms around a million families became homeless just in a small time of 3 months.

With the share markets plunging and the productivity decreasing all over the world. The GDPs of North America and Eurozone went into a recession. 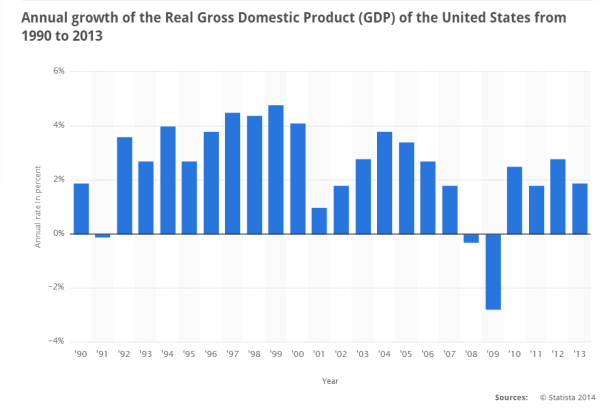 After a long tenure of progression a surviving a negative GDP during the DotCom crisis of 2001, USA went under -2% of GDP in 2009. 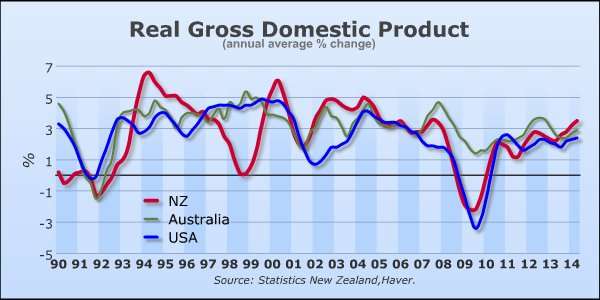 The above chart shows the effect of the recession on Oceania, where Australia survived the recession but still had a negative effect on the GDP whereas New Zealand clearly showed the sign of recession by reflecting negative GDP almost similar to USA 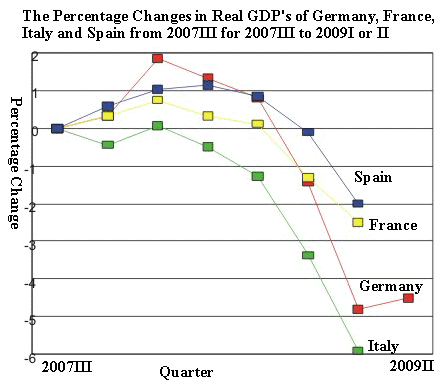 Italy was hit more than other 3 countries of Eurozone while Germany showed uptrend initially but then went below -4% GDP while Spain showed a downside of just 2%.

The recession gave birth to unemployment. Millions lost their jobs or had to shut down their business. 8.8 million jobs were lost in USA alone (source The financial crisis respone by the department of treasury). 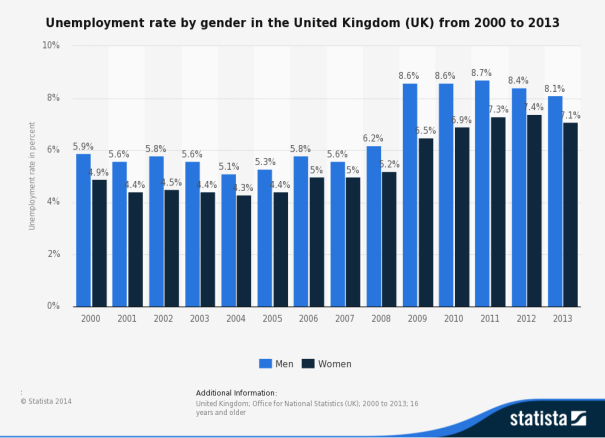 The above chart throws light on the increment in unemployment rate during and after the recession period of 2008-09 which almost doubled in 2008 as compared to yester years. 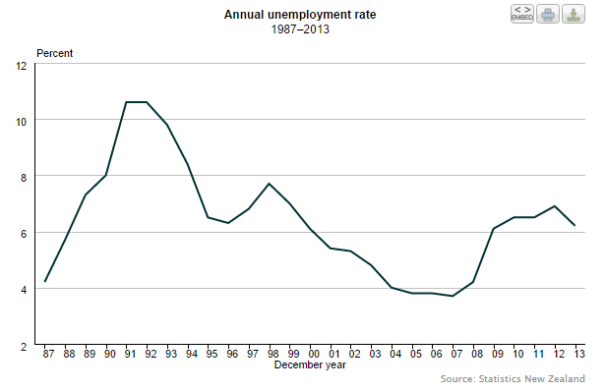 The recession also made of the new businesses (small-scale and large scale) to collapse. One of these bankruptcies was that of Lehman Brothers of Wall Street.

The annual Establishments birth and death supports the above idea and shows about a quarter of a million establishments were shutting down every quarter from 2008 to 2009. This in itself further boosts the unemployment rate. 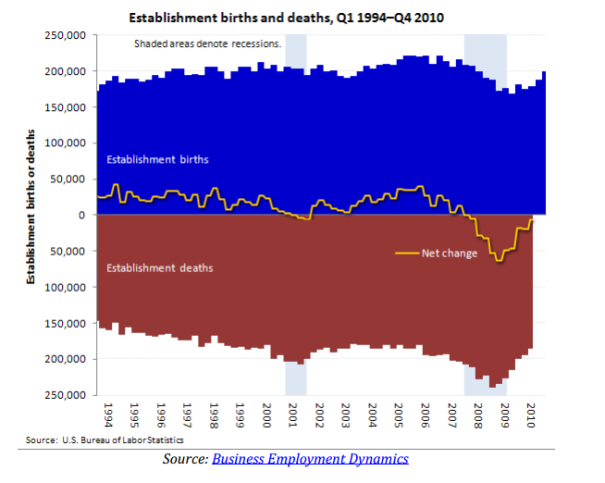 The recession was preceded by a financial crisis among the banks due to the reasons that these banks were holding a large portions of Mortgage backed securities and once the housing bubble was pricked no one knew what the real values of these MBS were. So, this resulted in a total halt of the credit among the world banking system. Many banks went bankrupt and many were on the verge of getting bankrupt.

The financial crisis followed with the global recession demanded for the governments around the world to step into the matter and help the financial system. US Treasury Secretary, Mr Hank Paulson, demanded a Troubled Asset Relief Program (TARP) worth $700 billion.

The following chart shows the global efforts to put the financial system back on track. 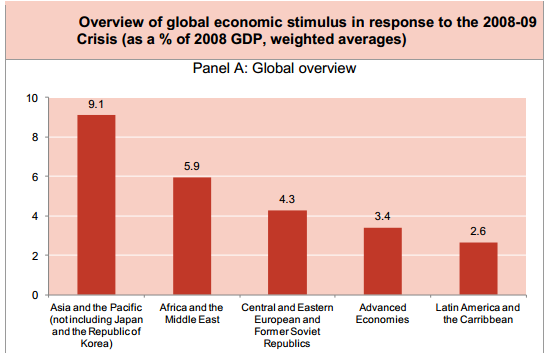 China as a part of Asia was one of the first country to come forward to support its economy.

“China responded with one of the largest and most timely fiscal stimulus packages (IMF, 2010) aimed at sustaining domestic economic activity. In particular, beginning in 2009, fiscal authorities implemented a two-year fiscal stimulus of 3.1 and 2.7 percentage points of gross domestic product (GDP) in 2009 and 2010, respectively, mostly composed of increased investment (90 percent of the overall package) and some transfers to households.”

“A credit of ¥7 trillion was channelled through the banking system to counter the impact of the credit crunch.”

All these efforts were effective but still the world ended up in about $12 trillion of loss according to IMF (International Monetary Fund).

Governments invested heavily in the troubled banks to save them from collapsing.

“The British government ended up in owing 43 per cent of the new Lloyds Group and 70 per cent of RBS.”

“The US government took stakes in all major American banks, including 34 per cent of Citigroup, once the world’s largest. Germany’s government acquired a quarter of cent of Hypo Real Estate, in addition to all the savings banks already part-owned by regional governments. The Dutch government rescued ING; France’s took stakes in the country’s six biggest banks”