Governments have stepped in and set minimum and maximum prices ever since they have had control over the populace. Just in the United States alone, governments have predetermined the price of gasoline, added rent control to housing in New York City, and even fixed a minimum on unskilled labors wages. However, sometimes governments may tend to go past simply establishing price floors and price ceilings, and attempt to take over the prices of the general markets. This was done throughout World War I and World War II, as well as during the Korean War in the United States. The attraction of controlling prices is logical. These types of controls offer an assurance of protecting those that might be specifically hard-pressed to endure an increase to prices. Nevertheless, by doing so, the governments may sometimes fall short in shielding consumers and at the same time damage others.

In the first scenario we are faced with the government setting a price ceiling on gasoline. Price ceilings are created to prevent prices of a product from exceeding a set maximum. However, if this is not done with the utmost caution, and the price in which the ceiling is set is below the equilibrium, it can create a drastic shortage of the product. As seen in the graph below, in order to maintain an even flow between price and demand, the government would have needed to set a price ceiling of no less than approximately $50/barrel to avoid shortages back in June of 2012. 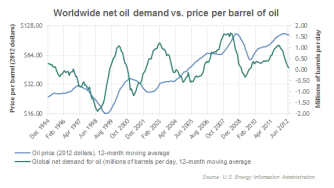 For example, 1973 and1979, the United States set a price ceiling on gasoline, which was below the equilibrium (Rockoff, 2008). This caused sellers to sale gas on a first-come-first-served basis, which also caused many consumers to have to wait in extensive lines to acquire gasoline as well as creating shortages. This is just one obvious example of the kind of chaos that can be created from the government setting a price ceiling on the gasoline market. That being said, a price ceiling can be a good thing at times. In 2005, Hurricane Katrina was on its way to impact the southeast United States coast. As impact was determined and warnings went out, many convenient stores significantly raised their gasoline prices overnight. This is known as price gauging. It is against the law, and a price ceiling is one way of preventing these types of circumstances from taking place and abusing consumers. These laws also apply to the other end of the spectrum to protect the populace.

There is also a flip side to price ceilings where the government may set a minimum price. In the second scenario we have the government setting a minimum wage for unskilled laborers also called minimum wage. This is called a price floor. In 1992 a survey of economists was published asking them about general controls. With the statement made, “Wage-price controls are a useful policy option in the control of Inflation,” there were only 8.4% who agreed, there were 17.7% who agreed with qualifications, but the majority of 73.9% disagreed (Alston et al. 1992, p. 204). The price floor on wages could causeunemployment levels to rise, although they do increase the overall income of laborers in the regulated markets. As we see in the chart below, minimum wage versus the job market is inelastic, meaning that as minimum wage rises, the amount of employed laborers falls, increasing unemployment rates. Do to inflation, minimum wage does need to be adjusted to a degree, however, that degree is a very sensitive one, and governments must take this into consideration. Price ceilings floors, however, are not the only issues that can significantly affect the economic market. 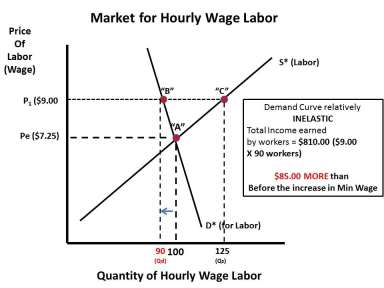 Governments also have to deal with international trade. International Trade is the trading of services and products between at least two countries. Mankiw states ‘all countries can benefit from trading one another because trade allows each country to specialize in doing what it does best, ’ (Mankiw, 2013). This simply means that international trade is based upon the foundation that each country alone is not able to produce everything they need with the resources at their disposal and stay inside a minimum cost and quality range. The households benefit by having the ability to attain the best products at the lowest prices. Countries benefit because they can focus their resources in producing extra of the products which have a more comparative advantage and trading the overflow for those products they are short on. Also countries exporting earn foreign exchange which helps with obligations towards international debt, and can even increase appreciation of their currency. The owners of the exported products also get an advantage by increasing the prices in-line with global pricing, which is normally higher than the domestic prices.

There are also losses to international trading that can occur. For one, this trading creates a dependency on other countries which can become an issue under circumstances such as political disagreements or even war. For instance, almost every country imports oil from countries like OPEC and Venezuela (Mankiw, 2013). If even one of these two countries were to stop exporting oil, much of the world would be at a standstill in less than a month because of these dependencies.

There are other issues that can also affect importing and exporting with other countries such as tariffs, which is a fee that is assessed on imports. This can be done in several different ways, but the most common is the ‘specific tariff,’ which is a simple per unit charge. Governments may do this to help increase revenue or to protect domestic markets and industries from the competition from foreigners (Investopedia, 2013). This charge must be paid by the exporting country to the importing country. However, this can also lead to trade wars, as the other countries may start to add tariffs themselves to all of their imports. The WTO (World Trade Organization) is in place to ensure avoidance of just such issues being exaggerated. We can see how a tariff plays a role of increasing the price of imported goods in the graph below. It is important to understand that tariffs are not the only taxes that can affect the price of products and services. 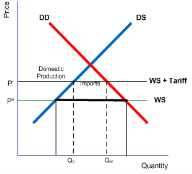 Governments tax most everything with the exception of groceries. For example, taxes on gasoline are one of the hottest debated among economists. There have been numerous studies exploring the effects of a range of gasoline taxes and how they might affect supply and demand (Picker, 2013). The bulk of the revenue generated from gasoline tax is placed in the Highway Trust Fund. Debates started in the early 2000’s over the use of gasoline taxes to create revenue (Ferguson, 2007). There are those policymakers who believe that the tax should be reduced or even suspended all together. Mankiw reasons that an increase in the gasoline tax, even by just one dollar, would produce $100 billion revenue in the first year (Mankiw, 2006). This money could be used to start paying off on the deficient; however, some policymakers fear that it will just increase government spending. Therefore, the efficiency of the revenue is dependent upon how the government uses the funds. Also, taxes make the total price per gallon go up for consumers, who, as we have seen in the past, may look to alternative means of travel to save the cash, which will actually cause revenues to decrease as the demand for gasoline decreases (shown in the chart below). 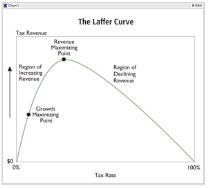 There are many different factors that can influence and affect the economic structure of the country. From price ceilings to price floors, along with federal taxes and tariffs on imports, every aspect of economics has its advantages and disadvantages. It is up to the households, firms, governments, and countries to work together to keep the economy flourishing with growth.

Ferguson, J. (2007). “Should the US increase the Federal Gas Tax?”Major Themes in Economics. Retrieved from http://business.uni.edu/economics/Themes/ferguson.pdf