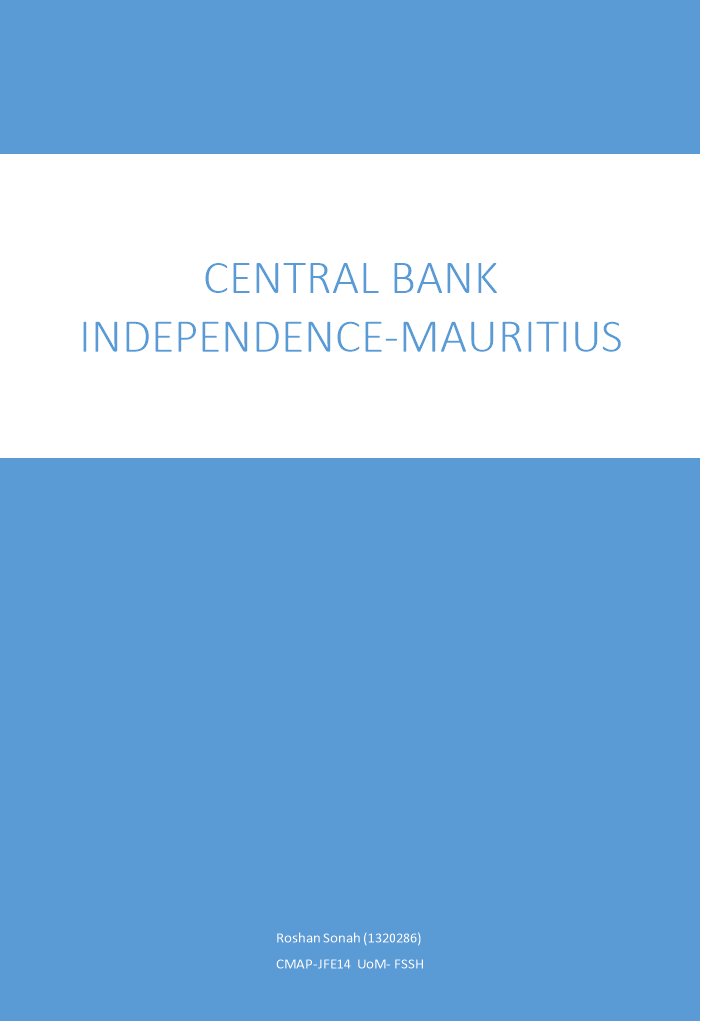 Statement of the problem

Central bank independence (CBI) has become one of the fundamental concepts in monetary theory and policy and an increasing number of countries in all regions of the world made their central banks independent in the last twenty years. The culmination of this trend was perhaps the creation of the European Central Bank (ECB) which is the most independent central bank of all. The ECB is not only independent concerning the instruments it uses but defines its target inflation rate itself. It is widely believed that central banks otherwise will give in to pressure from politicians who may be motivated by short-run electoral considerations or may value short-run economic expansions highly while discounting the longer-run inflationary consequences of expansionary policies. If the ability of politicians to distort monetary policy results in excessive inflation, countries with an independent central bank should experience lower rates of inflation. Indeed, an important line of empirical research focusing on the relationship between central bank independence (CBI) and inflation, suggests that average inflation is negatively related to measures of CBI (Cuckierman, 2008),

In most economies, the financial system architecture plays a significant role in economic development. At the pinnacle of the financial structure is a central bank which performs basic functions such as keeping the payments system and the financial structure safe and sound; and providing financial services to the governments and other financial intermediaries. More significant is the bank’s role in monetary policy which has implications for the long-run growth and development of the economy. Studies have shown that a high level of central bank independence is required to assure price stability in an economy (Cuckierman, 1992). In Mauritius, it is commonly believed by the layman that the price level is not stable and there is often great discussions on the role of the intervention of the Ministry of Finance with that of the Board of the Central Bank. This study is aimed to shed more light on this burning issue in the monetary world. Thus, the study will add to existing empirical studies to confirm or contradicts the independence of the Bank of Mauritius.

The objective of the study will be to assess whether central bank independence helps to achieve price stability in the context of Mauritius. Furthermore an analysis of the role played by the Central Bank in managing inflation will be carried out. As a result, we will get a proper understanding of whether the BoM is really working independent from the Government growth objectives.

Policy makers have an incentive to enforce a monetary “surprise” through untimely application of monetary policies given the opportunistic behaviour and political aims of the government. At the approach of the election, their aim is to reduce real wages and boost output and employment by creating “unexpected inflation”. As economic agents behave rationally, they will adjust their behavior according to their inflationary expectations and the final outcome is higher wages and prices. One of the most significant arguments for CBI is the time inconsistency problem, proposed by Kydland and Prescott (1977).

Time inconsistency take place when the optimal plan made for some future periods is no longer appropriate when that period actually lands; as a result, the policymaker has to readapt the pre-announced path. In the framework of monetary policy, there are incentives for a politically motivated policymaker to exploit the short run trade-off between unemployment and inflation, thus, giving rise to the time inconsistency problem. Therefore, economic agents and policymakers would make the outcome of time consistent policy sub optimal since it contains an inflationary bias. Hence, it is disputed that central banks should be made independent to ensure credible pre commitment to policy targets. In this way, the inflationary bias of monetary policy can be removed by following monetary policy-making rule.

The relationship between CBI and inflation has been a research subject in many empirical studies. These studies differ according to the empirical method employed, the model and type of indices used to quantify the extent of CBI, as well as the type of the economies included in the sample, that is, developed, developing, and transition economies. Most empirical studies use either an indicator based on central bank laws in place, or the so called turnover rate of central bank governors (TOR).Alesina and Summers (1993) analyze the effect of CBI on several real economic variables over the sample period 1955-1988.

A time series analysis will be carried out for a period of around 30 years. Secondary data will be collected at the Statistics Mauritius and Bank of Mauritius. Two proxies of central bank independence including the turnover rate of central bank governors and the size of the government budget deficit would be used. Other real variables affecting inflation rates will also be included into our study such as the exchange rate, the real GDP, trade openness and the unemployment rate.