Thailand, was known as Siam till 1939, for around 5,000 years it had been inhabited with the earliest civilization believed to be that of the Mons in central Siam, even though the first Siam state is the Theravada Buddhist kingdom of Sukohthai.

Among the most glorious periods in its history was the reign of Ayutthaya, which was established in 1351 by King Ramathibodi. During that time it was one of the centers of trade and commerce in Southeast Asia, Ayutthaya allure the disdain of the Burmese, and they conquered the kingdom twice in the 16thand 18thcenturies. During the second invasion, the capital of Siam was looted, laid to waste, and left in demolishes, a pale phantom of its aged glory.

Thailand has one of the oldest existing monarchies, and in 1782 by King Rama I the current Chakri dynasty was founded with the capital shifting for the first time to Bangkok. During the 20thcentury saw the dawn of immense change in Thailand. King Mongkut (Rama IV) was instrumental in developing a strategy that enabled them to avoid the yoke of imperialism that overtook Laos, Cambodia and Vietnam –Siam’s closest neighbors.

The King’s strategy was simple: his ministers signed unequal treaties that gave free trade, additional rights, and special advantages to imperial powers liketheU.S., Great Britain, Japan and France. The consequence was that by playing each one of these powers to one another, Siam figured to maintain its independence. A peaceful coup revolved the country into a constitutional monarchy in 1932, as earlier Siam now known as Thailand in 1939.

Controversially, During World War II Thailand sided with Japan. The period following the war was a chaotic one for Thailand as it battled a number of military coups even as dissatisfaction rose against inexperienced public officials, food shortages and rising inflation. The democratic elections of 1979 had its first period of stability, as the economy sturdy with the crumble of military rule.

The country was rocked by several coups over the next two decades before violent demonstrations in February 1991 forced the military to relinquish power to a civilian government led by Chuan Leekpai, leader of the Prachatipat (Democrat) Party. He is credited with starting the methodology of making a totally new constitution, and initiated a few changes that led to Thailand having one of the highest growth rates during this period. At the turn of the 20thcentury, a relatively unknown party called the Thai Rak Thai Party (TRT) led by the charismatic Thaksin Shinawatra came to power on the promise of economic reforms.

Thaksin delivered on his promises but was unyielding by allegations of mass corruption. Then the tsunami that hit Southeast Asia in December 2004 affected Thailand too, it caused nearly 5,000 deaths, and eroded a major source of its revenue which came from tourism. General Sonthi Boonyaratkalin led a bloodless coup in 2006, overthrow the unpopular Thaksin and leading to fresh elections in December 2007.

A new party called the People’s Power Party, consisting large members of the disintegrated TRT, won the majority number of seats under the leadership of Samak Sundaravej, came into power in February 2008 and lead 6 party coalition. And then was replaced by Somchai Wongsawat as Sundaravej had violated the constitution by hosting a television cooking show and had to step down. The People’s Alliance for Democracy (PAD) stated that both Sundaravej and Wongsawat were puppets of Thaksin. There were repeated protests held in Bangkok since May 2008 and five months long protests considerably weakened the government’s ability to implement policy. Matters came to a head when the PAD overtook the Bangkok International Airport in November, leaving around 350,000 travelers unattended which resulted in a good loss of tourism revenue and wielded a body blow to the country’s image. Eventually, opposition leader Abhisit Vejjajiva of Democrat Party become Thailand’s third prime minister within four months duration.

The financial crisis that broke off in Thailand in 1997 has not only brought on the need to understand the immediate genesis and possible cures of the crisis, but also a more fundamental question as to what had gone wrong with the growth process leading to the crisis or due to some of the subtle imbalances in macroeconomic management, or was it inadequate technological advancements in the right directions?

Could it be flaws in the design and operation of some of the political/economic/social systems or institutions, furnishing the whole economic system vulnerable to major economic shocks? Final answers to the above questions are difficult to obtained, or agreed upon. However, one can begin to pursue the answers by first trying to understand the historical aspects of the growth process of Thai economy. The probability of getting the right answers can also be enhanced substantially by comparing its experiences with those Asian economies that have gone through the similar path of growth and crisis, and also with those that were much less hit by the crisis. Studies on sources of economic growth of East and South East Asian countries are numerous. On the more recent account, Hahn and Kim (2000) argue that macroeconomic policies, trade policies and, especially, institutional quality, are important in ‘explaining’ East Asian high economic growth during 1960-1990”.

The purpose is to look into accounts of the past fifty years, from 1950-2000, of changes in policies and environments in Thailand that are potentially crucial to the understanding of the growth process. The Thai economic history is divided into four sub-periods for the same:

I) 1950-1973, which is the period that Thailand laid foundations for the subsequent high and stable economic growth.

II) 1974-1985, which is the period of macroeconomic uncertainty, hardship and difficult adjustments.

At the beginning of this year, THD hinged, and has since been on a steady rise and the ETF is up 31.51% YTD. Driving this growth is an economy that continues to grow, ignoring political turmoil. 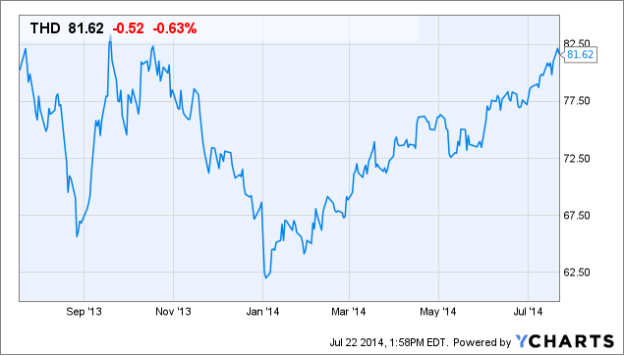 Six weeks ago, Thai army Chief Prayuth Chan-ochaannounced a military gained control of power. The constitution was left aside, and leaving the monarchy in place. Army soon re-examine, though, and kept much of the 2007 constitution. This also included sections handling with the succession of the monarchy.

This was 14th successful coup after 1932’s absolute monarchy end. The bloodless coup followed months of mass protests andchaos in governmentbefore Yingluck Shinawatra wasforced to resignas PM. This was provoked bygovernment last November attemptsto restore a fully elected senate and extend an amnesty that would have enabled convicted former Prime Minister Thaksin Shinawatra to return from exile eight years after being deposed.

It has been reported that in effect the military takeover was executed on behalf of the royal network or old elite. Journalist Andrew Mac Gregor Marshalldepicts an enormous struggle over access to the tremendous wealth controlled by the palace, specially by the Crown Property Bureau, between the old world class and that hosts underpinned Thaksin’s Pheu Thai gathering and exploited its general population supporters.

The key to such access, is control of the royal succession and control over the national assembly.

People’s Democratic Reform Committee lead by Suthep Thaugsuban, who also headed the protests, isbelieved to have been plotting with Prayuth since 2010 to bring down the Thaksin regime.

4. THE IMPACT OF MILITARY RULE

Since the takeover, the army has invited critical journalists, protestors, supporters and academics of the last government, with members of the red shirt movement – as well as some PDRC leaders.

Several local TV and radio stations are off the air. The army is rumored to be planning severe control of the internet. It was reported from Bangkok post that panels taken from the armed services and others will watch all media.

The citizenry has been muted in its reactions to the coup. The red shirts have back down from the streets of Bangkok and even

indicated some willingness to participate in the army’s reconciliation games.

Authorities banned the three-finger sign that was adopted as a sign of disagreement. Occasional rumpus have occurred between soldiers and the few citizens flout the ban. Citizens are promoted to give photos to the junta of persons who do so.

The army has acted quickly to give rice farmers their belated payment for the last yielded crop. Civil servants can be heard praising the fact that projects are running again after enormous delays under the previous government. The army claims it is checking large projects for corruption and malfeasance. 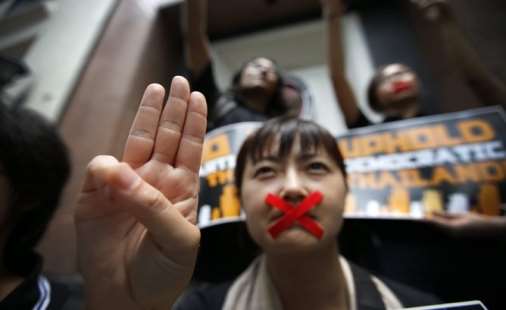 To keep the public happy, the army is to review fuel and energy prices. During the World Cup, authoritiesurgedall matches be screened free to air and agreed to compensate the cable network owners of the broadcast rights.

The military takeover caused an enormous efflux of Cambodians working illicitly in Thailand. The army very soon sought to silent the fears and promote the return of the workers to the multitude of enterprises that have come to rely on them, as long as they get visas and work permits

5. THE COUP AND THE NATIONAL DIVIDE

Young people migrating to Bangkok from Thailand’s north and north-east are not as committed to the red-shirt movement or as likely to be enlisted into a Thaksinist party as their parents were over the last two decades. The emphasis was on getting good jobs and career opportunities on the back of improved rural education.

One can argue, both groups wanted corruption to end and the old order of entitlements and to get on with effective economic management and social justice, as long as someone else goes to the trouble.

With the current scenario, the coup can appear as a required straightening out in advance of restoration of parliamentary democracy, which itself is seen as being as much about protectingrelations with the USas anything else.

The army claims to be capable of reconciling red shirts and supporters of the previous government and PDRC. There is uncertainty in what it proposes to do. Some moves have inferred charges of army bias while others have raised wry smiles.

The army believes it can appoint 200 members from all important sections of the community to a new national assembly who will be willing to settle. The last coup was only eight years before, the new constitution, subsequent constitutional assembly, and restoration of parliamentary democracy. Regardless of all that exertion, important structures have not changed.

A new national assembly won’t change these foundations which would require steps such as effectively redistributing income through reform of the land tax, directing more resources to education and health care in rural and suburban areas; providing social security to the poor; securing farmland by better land-use regulation; and using government initiatives and resources to realize opportunities created by a newASEAN Economic Community.

The trafficking and misuse of illegal migrants can’t be allowed in order to provide a dishonorable floor to incomes of Thais throughout the country. 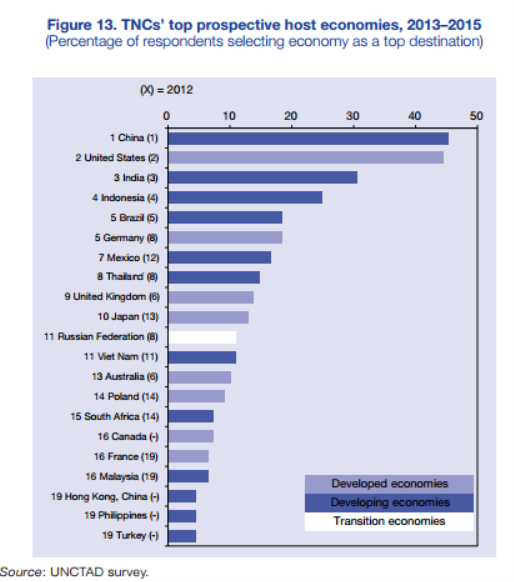