Effect Of Information Technology On Economics

What is the significance of the observations made by OECD in this case study regarding “The OECD economies are more strongly dependent on the production, distribution and use of knowledge than ever before”? Why does OECD suggest that technology is the key element in economic development and long term economic growth?

Abbreviated as “Organization for Economic Co-operation and Development”, OECD is a platform composed of team from number of countries who work together to assess and form a suitable economic policies and then they are applied by the countries in order to foster economic growth in a particular economy.

The basic assumption that the author develops on which he emphasized the remaining points is that the need to use knowledge in production enhancement and distribution of the final product becomes so much critical for OECD countries. On the basis of this assumption, he talks about the production, output and final revenues through sales in terms of using high technology. On the production side, output and the efficiency of the workers in the workplace have been improved greatly by high technology machines. Technology has not been the most important partner in enhancing the production capability rather it provides the firms the new ideas about how to make the innovative and more appealing products and services (Bassanini, 2001).

In terms of revenues and cost, if we analyze the role of information technology in OECD a firm it is clear that high technology shares about 20-25 percent of production and particularly exports in OECD countries. Almost more than 50 percent of the GDP share in OECD countries is of technological products. Therefore, no doubt for a single business technology infrastructure is a onetime fixed cost but later on it reaps the more benefits than the cost it incurs (Neusser, Kelger, 1998).

OECD suggests that technology is the key element in development of economy in long term which is based on number of facts. First of all, the growth rate and the contribution of information technology in GDP are increasing gradually. Technological products and services are the fastest growing sectors in the economy and because of this fact they are critical factor in the development of economy as a whole. Technological innovation means a new area to do business which will generate demand in the market so suppliers would supply the innovative goods and services, employment would go higher due to increase number of jobs available, and all of this will result in a more flexible cycle of the economic business. Number of income per head is greater than decades back due to faster economic growth due to IT (Bassanini, Scarpetta, 2001). Secondly, information technology and communication would also help to enhance the existing systems and processes in production and all other fields of the business. As a result business would be able to differentiate them based on cost leadership or innovation which would in turn put more money to the larger economic cycle as a whole. These are the two ways in which it can be safely suggested that technology is the key driver behind economic growth and long term sustainable competitive advantage (Neusser, Kelger, 1998).

What are the causes of economic growth in potential output in the long-term? Apply the theory to illustrate and explain your answer with an example.

There are number of causes of economic growth in potential output of the organizations as a whole. According to theory, following are some of the elements:

The first element explains that today more amount of factor of production as well as supportive factors is present in the economy. Basic factors of production are four but the supportive factors including the most important one i.e. information technology has boosted the economic growth. The second element is an increase in the productivity of the factors which is the most important area where technology has to play its role. Information and communication technology has made it possible to enhance the production by taking more benefits through improving the quality of machines, streamlining the business processes by effectively transferring the communication etc (Borts, 1964).

Basically three other factors are there to impact the long term economic growth as given below:

It is the level of earnings at national level as shown by the graph. 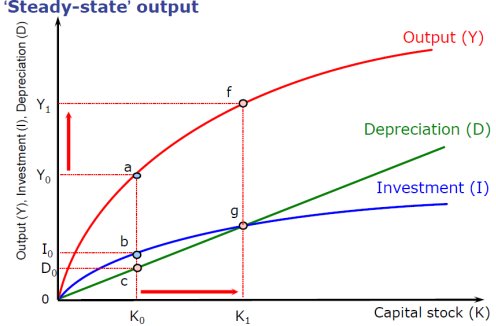 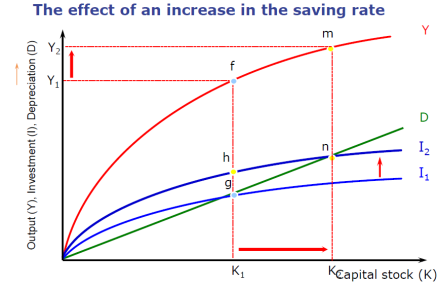 This factor directly effect on increasing the saving rate in the population. They tend to save more so the capital accumulation level increases. Education and awareness also plays its role here (kaldor, 1961). The effect of saving rate is shown in graph. 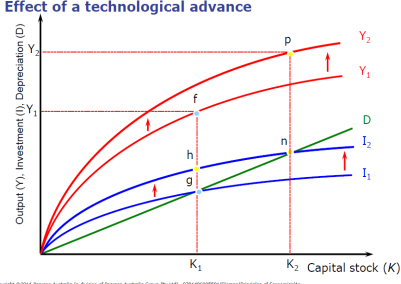 Clearly shown in the graph that technological factor boosts the economic growth by the quite large amount as a whole.

Two more factors highlighted in the case study for economic growth are explained. One factor is the policies implemented by the Government in order to improve the economic growth in the country. Other one is that there should be the close networked system of knowledge based businesses throughout the industry in order to diffuse the knowledge and information more easily. If that kind of networked system exists, only then it can be expected to increase and enrich the productivity and output (Swan, 1956).

In what areas of the economy jobs are growing more rapidly? Is this due to a lack of technological innovation in these areas? Explain your answer with an example.

Software and apps making organizations are those that require more human intelligence and competitiveness especially as the trend of the industry. High level skills are those that focus more on decision making and intelligent kind of jobs as compare to the low level skilled. High level jobs generally require more educations, learning, experience and analytical ability as compare to the low level jobs. Software organizations are particular to acquire and retain high level skilled jobs for ideas, developing the software program and then implementing it properly. More of a high level skilled person is, more there are chances to get higher compensation packages. Moreover, the persons with high level skills always get the high demand in the market. So in case of job switching them always is delighted by the chances of getting the right job for them (Freeman, 1997).

Basically the main areas in which technology is enhancing the probability of employment are information, communication, infrastructure, database, automation especially in production and administrative departments. Most of these jobs are comparatively highly paid as compare to others in the market. So not only IT has enabled the economy to discover the new areas in the employment but it also enhances the chances of being more paid than others. But it has definitely reduced the employment growth in low level skilled jobs due to automation and ability of machines to handle multiple people tasks at a time (Brown, 2003).

Technology affects the job in four stages as under:

Why have rural regional areas generally seen a smaller decline in high-tech employment than urban areas, and in some cases seen an increase? Explain.

Rural areas have seen a decline in employment in high tech field as compare to urban areas. The main reasons are explained as under:

Moreover, another trend is an increase in employment of high tech sector on rural side. The main reasons for this are given below:

An example of the above mentioned situation is that the restriction from the Government on the Bio-gas factories are that they have to be set up in rural areas because of availability of raw material. So due to that they have to place their high tech plants in adjoining areas and in turn employment is created for the people in those areas and overall percentage of employment increases (Freeman, 1997).

In what way might the government and the business sector contribute to improving the knowledge networks with an economy to promote technological progress to achieve faster rate of economic growth?

The Government and businesses can contribute towards the faster growth rate of economy by increasing the productivity and output. Productivity is increased through linking and improving the knowledge networks throughout the industry. For the innovations and knowledge to create the major difference, it should be diffused completely in the industry. Industries mostly have a same method and same set of processes. If a network is developed based upon similarities and long term relationships between the business partners, it can add a real time value to the whole industry (Adler, 2001).

Linkage with the innovation

Usually an innovation is not an outcome in all the efforts in a single area. Instead an innovation comprises of input from different fields of knowledge. It has to be engineering, research, management, Human resource, production and marketing. Production unit will make the innovative product only based upon the recommendation from research and development department whereas; R&D would take the benefit from marketing department’s analysis of the consumer needs and changing trends. Therefore an innovative product is just not a result of a single area. Rather it has to get the combination of recommendations from different disciplines. For developing the linkage with other areas, it is usually the first choice to make a proper network which can work to accommodate the needs of innovation and distinction (Burton, 2001).

The ability of the system to disseminate the knowledge and information with different departments in the organization, between different organizations and among different industries will make the system more effective in delivering what has to be expected. Only that is the way to improve the innovation in technological progress which will ultimately achieve success (Adler, 2001).

Networked economy formed on the basis of knowledge sharing is the basic element which can be a reason for technological growth in the country. This type of networked economy is the need of today’s competitive world. A company has to be updated in technology as better than its competitors in order to achieve point of differentiation in the industry. Businesses and government can do following steps in order to improve the knowledge network:

For the Government, first of all it has to focus on increasing the educational level of the people. Then by higher focus on research innovations can be encouraged. Moreover infrastructure development and through the protection of intellectual property rights, the network economy can be encouraged which will in turn increase the technological innovations and economic growth (Hekkert, Surrs, 2007).

This case study is about the impact that information technology is putting on economics. New jobs are created which require highly skilled people. Then a networked economy has to be established. Government has also become the responsible for the focused but flexible economic policies (Brown, 2003). Therefore, technology progress is a critical path through which organizations can achieve success and profits in the long run.