Use an appropriate supply and demand framework to explain how a decline in earnings from legitimate work would be expected to affect the level of crime. To what extent does evidence from the UK support this theoretical prediction?

The idea that low earnings affect crime is not a new idea; Aristotle (350 B.C.) himself said “poverty is the parent of revolution and crime” (pg. 32). Since then, there has been much research in the field since policymakers require this information to create effective crime-reducing policies. In recent years, falling real wages has been a significant issue since the UK is in the longest period of pay stagnation since 1855 (The Economist, 25th Oct 2014). I will discuss the impact of falling wages on the crime rate by using an economic supply and demand framework and comparing my findings to real evidence from UK data.

Both Becker (1968) and Freeman’s (1999) work make the assumption that criminals are rational economic agents and hence criminal activity can be modelled using a supply and demand framework in the same way one could a goods or services market.

Economic theory states that the supply of crime depends on four components: potential earnings from committing a successful crime (Wc), probability of being caught (p), level of punishment (S) and wages earned from legitimate work (W). This can be shown in the following inequality:

These factors which influence whether an individual decides to commit a crime or not can be aggregated to create the following function for Criminal Participation (CP):

The demand function of crime describes how the level of crime in society falls as individuals take increasing preventative measures (Cook, 1986) and therefore, the demand curve is downward sloping. However, the level of demand for committing crimes varies depending on the type of criminal activity undertaken. Freeman (1999) differentiates between “victimless” and “victims” crime suggesting that “victimless” crime carries obvious economic gain, e.g. dealing drugs, whereas “victims” crime has no obvious economic benefit e.g. violent crime. However, the downward sloping demand curve for “victims” crime is less intuitive so most work focusses on “victimless” crime. It is worth noting that one of the limitations of this supply and demand model in analysing crime rates is that it does not take into account non-economic incentives i.e. the feeling of doing wrong versus earning an honest living.

Having discussed how to model crime using supply and demand analysis, I will now use these economic tools to illustrate a situation where wages are falling.

If wages from legitimate work (W) fall, the supply curve will shift outwards since the opportunity cost of crime has fallen. Using the inequality previously discussed ((1-p) U(Wc)-pU(S)>U(W)), if legitimate earnings (W) fall, assuming ceteris paribus, the benefits of committing the crime are relatively higher. Hence more people will be willing to commit crimes. This is shown in Figure 1 as the shift from CP1 to CP2.

Cantor and Land (1985) call this the motivation effect. 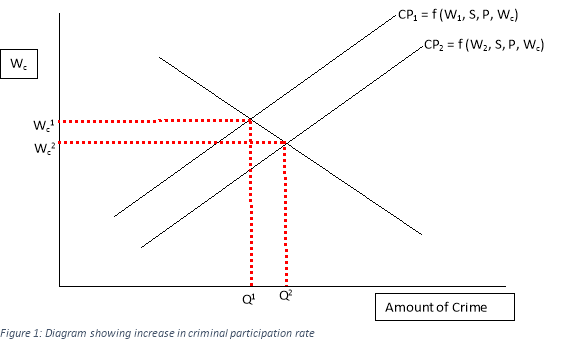 As shown here, the outward shift of “supply” of crime (CP1 to CP2) results in an increase in the amount of crime committed (Q1 to Q2).

However, there is also a fall in potential earnings from crime (Wc1 to Wc2); if wages fall, the value of consumer goods being bought is likely to fall so there are fewer valuable goods available to steal. This is the Opportunity Effect (Cantor and Land, 1985). So the fall in wages could actually reduce the crime level.

It is difficult to gauge which effect, Opportunity or Motivation, is stronger. One factor which could affect this is whether low or high wages are falling. Machin and Meghir (2004) make this distinction by analysing the 25th wage percentile to capture lower skilled workers whose opportunity cost of committing is lower (Freeman, 1999). Machin and Meghir use data from England and Wales (1975-1996) and focus on vehicle and property crime as these are more likely to be driven by economic incentives than e.g. violent crimes.

Figure 2 shows the relationship between the level of wage growth in an economy and the level of crime. The close proximity of the points on the graph to the regression line (calculated using a weighted least squares regression) shows a relatively strong negative correlation between the variables and the slope of the regression line gave a value of -1.580; hence, as the 25th percentile wage rises by 1%, the property crime rate is expected to fall by 1.580%. 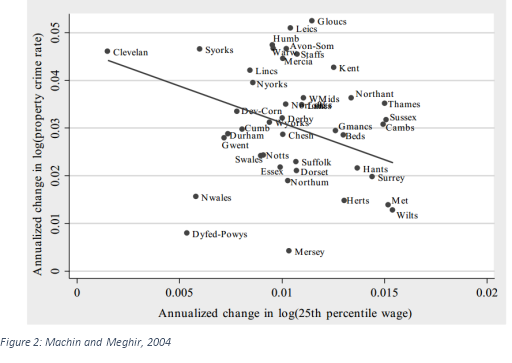 We can also look at more recent wage and crime data from the UK to see if it supports the conclusion, that falling wages leads to higher crime rates, drawn from supply and demand analysis. As shown in Figure 3, there has been a downward trend in the real wage rate in the UK since the financial crash in 2007, real wage growth was around 10% but this has fallen to -9% by 2014. 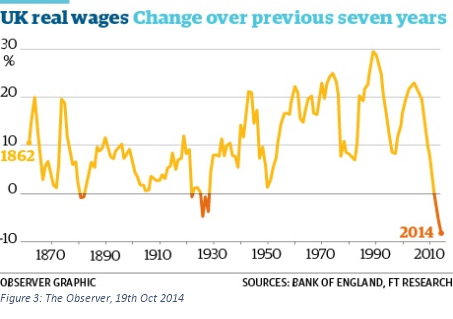 Using economic theory, it is evident that if real wages fall, then tax revenue earned by the government is likely to decrease through e.g. lower income tax revenue. Moreover, if people have lower earnings, government’s spending in transfer payments e.g. benefits is likely to rise. The situation of falling tax revenue and higher demand for public services has led to a worsening budget balance so the Coalition government adopted austerity measures.

This has affected many areas of public sector spending, including the police force where there have been £2.5bn in budget cuts since 2011, and an estimated 70% of these cuts have been in officer cuts (BBC News, 22nd July 2014). This leads to a fall in the probability of being caught (P) and severity of punishment (S), since severe punishments are typically more expensive. The effects on P and S are “second round” effects derived from falling wages. Using the CP function, one would expect that if P and S fall there is a rise in crime.

However, national crime statistics demonstrate a reduction in the level of crime in the UK (figure 4): 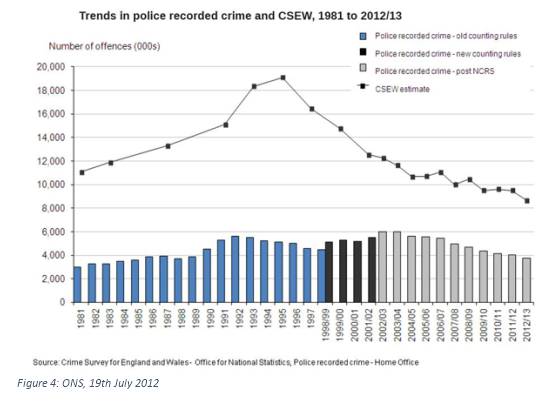 So it is evident that crime has been falling since around 1995 as shown by the Crime Survey for England and Wales (CSEW) data estimate. Since the financial crash, crime has fallen from around 10.5 million in 2008/2009 to 8.5 million in 2012/2013. This contradicts the conclusion made using supply/demand analysis that falling wages leads to higher crime rates. However, David Cameron argues that remaining policemen have been asked “to do more with less resources [and they] have performed… magnificently” (Gill, 2013). However, critics argue that there are other factors which have reduced crime statistics.

Gill (2013) points towards technological advancements as a significant reason for a falling crime rates. Firstly, car manufacturers are able to include central locking systems which makes it more difficult for criminals to break in. Secondly, car break-ins are typically a “starter crime” leading onto more serious crimes such as drug dealing; if fewer people are getting involved in crime at this lower level then there will be less crime overall. Thirdly, Gill (2013) highlights the way crime is reported as being a problem since there has been growth in online and high tech crime, for example, online credit card fraud, which is not taken into account in the CSEW crime statistics.

Therefore, the “second round” effects, that falling wages/tax revenue force governments to cut police funding results in more crime, may not be felt since technological advancements have resulted in less (reported) crime.

That said, the Ministry of Justice (MoJ) made a statement (2010) explaining how it planned to stabilise the number of prisoners until 2014/2015 and after this it would look at reducing the number by 3000 fewer than the figure as of 19th November 2010 (85,393). So while austerity measures have been implemented by the government, the severity of punishments has yet to fall significantly; this may be another reason why the crime rate did not increase whilst wages have been falling. It will be interesting to see whether going forward now crime rates increase since the MoJ is aiming to reduce the number of prisoners.

In conclusion, it is evident that a supply and demand framework to model the effect of falling wages on crime cannot fully explain the situation we are currently in. In all fairness, Machin and Meghir’s work did support these findings, however more recent wage and crime data has contradicted the expected outcome. Therefore, although using a supply and demand framework can explain the impact of falling wages on crime to an extent, other factors, such as technological developments, may also influence the crime rate and policymakers who are trying to tackle crime need to ensure these other factors are also taken into account.