Effect Of Demand On Supply On Coffee And Sugar Prices

Table of Contents (jump to)

Microeconomics deals with economic decisions at micro level. It looks at the behaviour of the individual, people and companies within the economy. Being based on the idea of the market economy in which the consumer demand is the main driver for the prices and production levels of goods and services. It is basically inclined to explain how the interested parties choose in using limited resources being made available to them. It also focuses on the drivers of making decisions and the ways in which such decisions of them affect the demand and supply of specific goods and services. For the following article also I have choosen the effect of demand on supply on prices of two commodities as coffee and sugar.

The study of demand and supply on price due to the climate changes, where the prices increase due to the shortage of commodities or products and supply is short and where the demand is high is being discussed in the article.

When we discuss about the microeconomics we mean the study of economic behaviour of individual units of economy and not aggregate economy. It is basically concerned with the individual economic choices, the effect of changes in these factors on individual decision makers, how choices are coordinated of them and how demand and prices are determined. It so deals with the economic decisions made at low or micro level. The effect of demand and supply on a product of economy is updated while going through the article updated on February 21, 2014 which is explaining how Coffee shortage has arise and its impact on demand. The article thus explains that by the time of year in February, the delicate Arabica coffee plants which are in mountains of Brazil, where from most of the coffee comes, are about to mature by this time. The fragrant flowers appear followed by cherry like fruit, which each of them containing two seeds as Arabica Coffee beans, which are most popular in the world. But coffee shortage aroused due to the worst drought occurred last month in Brazil coffee belt region, thereby destroying the crop yields and causing the price of coffee to shoot up with a percentage of more than 50 this year.

Drought being historic and more than 140 cities in Brazil was forced to ration water, whereby according to some newspapers drought was so devastating that some neighborhoods of Brazil were receiving water every three days only. But according to Jack Scoville (a future market analyst) now the retail price of coffee has been stable. But their could be chances for the rise in price of Arabica beans then this year consumers would notice an increase in the prices of their coffee. Therefore this is a case of demand increase and supply shortage whereby putting an impact on the prices by increasing them.

The resultant of such a drought was the rise in price per pound of coffee which was meant for delivery due in March had reached the highest point around $1.72 in 14 months. There could be global coffee deficit were assumed before drought had to arise. Therefore for the first time in three years the global market of coffee would face shortage. So the predictions for the session 2014-15 were that the coffee supplies would be lowered by 5 million bags.

But according to the last years data there was so much coffee that Arabica coffee futures has fell down by 25% and according to experts the price of coffee would rose for long time period just because of people in developing markets like Brazil, China and India are acquiring a taste for coffee. Higher prices and more competition will be seen due to high quality of coffee according to a coffee buyer and sustainability manger as Kim Elena Ionescu. The developing world made coffee and the developed world had drunk it. But now the scenario has changed and the developing countries are also consuming coffee alongwith making it.

More people are involved in drinking better coffee according to what is mentioned in the article. Therefore demand will continue to make a shortage in supply. But there are considerable concerns that the climate change will also hamper the supply of coffee as it had happened in Brazil due to drought. This climate change in Brazil brought drastic changes in the price of coffee with the increase in its demand and shortage in supply as people preferred coffee over tea as many don’t like tea and prefer to have coffee in morning everyday. The taste of coffee has so long lasting effect that it makes the individual addicted to coffee have coffee even at high prices. 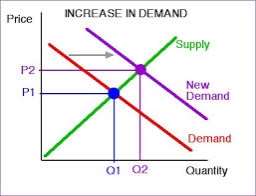 The Brazilian company has various thoughts on such a situation when it happened to be the worst drought as it would put the company in risk for their supply chain of Arabica coffee bean as mentioned in the article by the head of sustainability, Starbucks in 2011. As this company is the worlds renowned Company for selling coffee with high quality and variety which attracts the customers to have coffee from Starbucks store only. 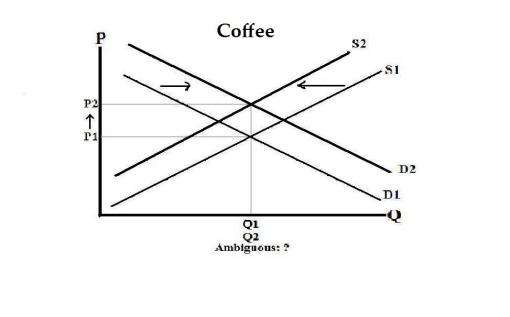 To explain the above statement, the above graph thus shows how coffee prices are increasing from P1 to P2 and the demand curve is shifting to right due to increasing demand of coffee, but the supply curve shifts to left showing that there is shortage of coffee.

According to the article it is mentioned correctly that many people like sugar in their coffee and for them as Brazil along with being the maker of coffee is the world’s largest producer of sugar, due to such conditions of drought is forced to take action as to disrupt plans for harvesting sugar cane. So the future prices of sugar tend to be at a rise and are at high level from the past two months due to the effect of climate change.

Therefore the article has made it clear the after effects of climate change as drought on the production of coffee beans and as well on production of sugar cane. This had made the worse situation for the economy as supply chain has also being effected and due to the shortage in supply and increase in demand of coffee and sugar as well had made the prices of sugar and coffee to rise.

This article thus made me to realize a situation where people would suffer due to the high costs and it may affect their purchasing power as well. As people would tend to earn in such a economy as they were earning earlier but in crises situation their income would also be affected as the company would not be able to pay much but in such a situation people who have to purchase emergency goods as coffee to satisfy their needs will purchase it at high cost no matter their income allows to purchase at high prices and sugar which is the more necessary commodity is also to be purchased by them at high cost. These sorts of purchases will affect their purchasing power to purchase other commodities which are less essential but yet in their need criteria to be left out as such. This decision is taken in a microeconomic environment. Therefore the country involved in producing the Arabica beans for the production of coffee is forced to think in future aspects of the increase in price of coffee to affect its supply chain as well, to come to a optimal solution to get rid of this problem in such a situation. As more and more people are inclined towards having coffee and one who is habitual to having coffee cannot be without it as coffee is also included in a drink which creates addiction for the individuals who are in regular use of coffee.

The article has a clear analysis of the increase in price of commodity due to the increase in demand but decrease in supply. As there is shortage of supplying the coffee due to the climatic changes so the prices of the coffee are at hike and the demand is also at hike accordingly. Therefore the article is showing a clear picture of the microeconomic situation and the study of economic theory as well. The economic theory so suggests the demand and supply are the main constraints for a product or commodity and are sometimes opposite in curve and sometimes run parallel by keeping any one constraint as demand or supply as constant with changes in price.