The generation living presently should leave the enhancement of air, water and soil resources as normal, as pure and not polluted as they found it to be for the future generations. Its quiet impossible to achieve such intergenerational equity given global environmental problems that emanate through human activities. Therefore following the Brundtland (1987) view, Sustainable Development implies meeting developmental needs of present human beings without compromising/sacrificing the needs of future generations. Sustainable Development is an injunction not to satisfy ourselves by depriving our successors (future generation) a pure ecosystem, particularly of finite resources. Environmentalist/Ecologists typically argue that archiving sustainable development requires treating natural resources (exhaustible and non-exhaustible) with care as they form part of all human productive activities. Whilst on the other hand, Economists believe that individual consumers will automatically adopt environmental preferences such that it leads towards environmental preservation, in other words: the market will solve all problems.

Sustainable Development has arguably been the centre of debate amongst different schools of thought, particularly between the Neo Classical school of thought and the Ecological school of thought (as we can see the different approaches used by the schools in the above paragraph). The environments capacity to accommodate human activity is questionable given the arising problems of unsustainable development that’s enhanced by the rate at which humans devalue certain environmental amenities and also by the rate in which humans discount future costs and benefits for present costs and benefits. This assignment is particularly aimed at exploring, how valuing and discounting of the ecological system by humans relate to sustainable development.

The rationale behind discounting by individuals is the preference for consumption now as opposed to sometime in the future (time preference). This preference may be composed of factors associated with the risk in delaying consumption, with the fact that increased wealth in the future might reduce the relative worth of the postponed consumption, and with possibly irrational, “pure” time preference (Tim Cowards, 1997: 28-39). Whilst on the other hand R. Kerry Turner, Jouni Paavola,…, (2003; 493-510) believe the rationale behind valuation is not having a defined monetary price tag on environmental goods but rather to express the effect of a marginal change in ecosystem services provision in terms of a trade off against other things people value.

As defined earlier, discounting future environmental benefits for present environmental benefits has resulted in large controversies and can have severe implications on policy formulations that seek to strengthen abatement levels in achieving sustainable development. Environmentalists typically despise the act of discounting as it impoverishes the ecological well-being of future generations thus resulting to unsustainable development. In understanding the concept of discounting, John Quiggin (1997: pp. 65 – 90) applies a basic example where; if a 1 dollar benefit subject to arise in thirty years, comprising a discounted current value of 10 cents, an individual consumer in thirty years will therefore have at margin, a weight of 10 cents relative to an individual born today. This basic example shows how future generations can be made worse off due to present human activities. Therefore we can clearly see that policies which seek to enhance present consumption coupled with resource depletion such that there’s predominantly scarcer finite resources in the future is associated with discounting procedures. Therefore the discounting procedure in-relation to sustainable development hampers strategic aims of intergeneration equity that seeks to distribute finite resources equally for both current and future generations.

Tom Crowards (1997, 28-39) stipulates that the rationale behind discounting by the society is that they face a preference on whether to consume now or to consume in the future (time preference). Such that this factor is associated with risk of delaying consumption, as the value of the worth in the future might be relatively worth less in present terms. Given that we can clearly see that there’s an opportunity cost associated with present consumption, which is said to be the return that society might derive by delaying consumption.

Computation of the discount rate:

There has been large controversy amongst various authors such as Ralph Winkler (2009), Thomas Sterner & Martin Persson (2012) over the extent to which the current generation discount future environmental benefits. Ralph Winkler (2009) analyses optimal investment in environmental protection and believes that human beings engage in hyperbolic discounting which is derived from the shortcomings of exponential discounting. Hyperbolic discount rates suggest that the discount rate of the society declines overtime due to three factors;

Hyperbolic discount rate has its limitations such as its failure to be time-consistent; therefore Ralph Winkler assumes a non-overlapping generation which is represented by a single agent. He believed the limitations of hyperbolic discounting will be eliminated by assuming the above and given that hyperbolic discounting stems from the societies uncertainty over the future, than there’s no issue of time-inconsistencies’ if plans about the environment are updated as new information becomes available.

On the other hand, the view of a high discount rate by Thomas Sterner & Martin Persson (2007) stems from the Stern Review (2006) which was a discussion paper aimed at providing policy makers input on the impact of climate change. Thomas Sterner & Martin Persson based their strong criticism over the low discount rate and non-market damages of climate change that are underestimated in the Stern Report. The two authors believed taking into account relative price could change the composition of the discount rate as changing relative prices (particularly of environmental goods) due to climate change can have severe impacts on the economy. Given that, the Stern Review made use of the Ramsey Rule when computing the discount rate as shown by the following equation:

Thomas Sterner & Martin Persson (2007) modified the Ramsey Rule that gave a low discount rate and rather made use of the DICE model which takes into account changing relative prices between market goods and environmental goods such that they arrive to the following equation:

Taking into account relative prices (particularly the environmental component denoted by γE) will result to a high discount rate such that policy makers will strengthen abatement measures of the dealing with the impacts of climate change. The figure below presents a scenario where after relative prices are taken into account policy makers’ intern take severe abatement measures of dealing with climate change which can be significantly reduced by minimizing greenhouse gas levels in the atmosphere. 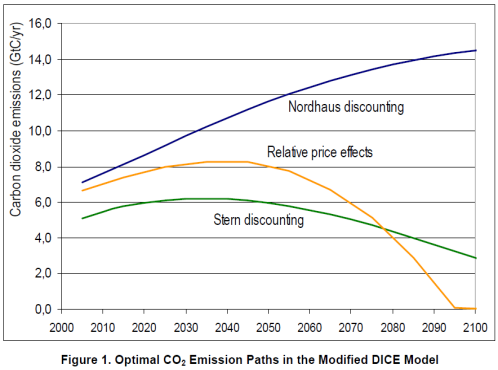 Richard B. Howarth & Richard B. Norgaard (1992, 473-477) stated that the imperfection of the environmental market is a major source of societies overexploiting the availability of natural resources such that, if the value of these resources are known then optimal efficient levels would emanate. It’s further emphasized that environmental value towards achieving sustainable development is interdependent upon each generation’s commitment towards transferring to the next sufficient natural resources and capital assets to make development sustainable. Therefore, Richard B. Howarth & Richard B. Norgaad (1997, 473-477) explicitly states the existence of a relationship between intertemporal allocative efficiency and intergenerational asset distribution towards understanding how valuing affects sustainable development. This explicit relationship is depicted by the graph below: 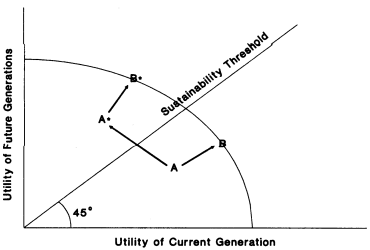 Economists define valuation based on an anthropocentric, utilitarian approach, which focuses on measures of individual well-being. The economic value of changes in environmental goods and services is derived from measuring the effects of these changes on human welfare (Lee, J.F.J., M. Springborn, S.L Handy, J.F. Quinn and F.M. Shilling, 2010, Pp.123). Economists typically argue that the multiple values of the ecosystem can be best represented by the total economic value (TEV) framework which comprises use values and non-use values.

Use values are regarded as values related to environmental features associated with an individual. The use-values can be direct or indirect; to such an extent that direct use-value involves human interactions with the environment, whilst direct use-values can be classified into consumption and non-consumption uses. Consumption-uses involve the extraction of resources from the ecosystem for human consumption (consumable resources such as, fish, food, timber, etc.). While on the other hand, non-consumption uses are environmental goods not directly associated with the day-to-day consumption activities of humans (these include, wild-life viewing, hiking, scenic vistas, etc.). Indirect uses are derived from environmental functions such as groundwater recharge and the option of keeping use-values at a later stage respectively. 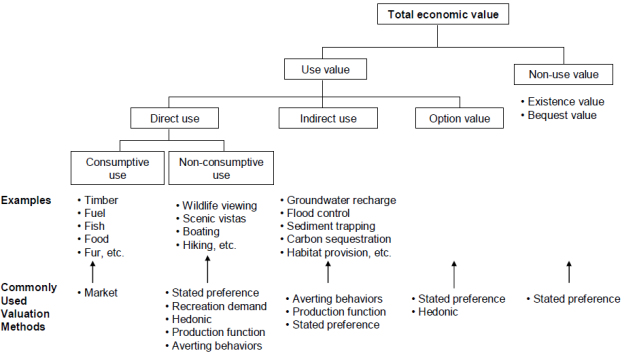 Non-use values are the remaining values aside from consumption and non-consumption uses. This includes existence value, such that people benefit by having knowledge of the existence of a particular environmental attribute. The distinction made can be best summarized by the following figure below:

This approach is fairly dependent upon the connection between market goods and non-market goods such that advantage can be taken by the amount of money paid for market goods .e.g. the connection between local water quality and residential housing. Revealed preferences generally involve choices that humans make in the market. Revealed preferences include methods of evaluation such as: Recreational demand, Hedonics, Market prices, and averting behaviour.

Hedonic Models: Explains price differences using data on the different characteristics of a marketed good. These are implicit prices of attributes and are revealed to economic agents from observed prices of differentiated products and the specific amounts of characteristics associated with them (Rosen 1974). If the Hedonic price function is estimated accurately then estimates represent an individuals’ marginal willingness to pay for the environmental quality. This method is commonly used if an environmental attribute directly affects the price of marketed goods.

Here economists generally consider intentions made by the individuals in hypothetical market situations. Stated preference methods are based upon surveys that distinguish values that individuals place on goods or services. Stated preferences comprises of two segments, namely contingent valuation and conjoint analysis which both comprise the adoption of simulated markets. This sort of valuation methods are the only ones capable of capturing non-use values as they’re mostly used when collecting information on the value placed on environmental attributes by those who value their existence.

Contingent Valuation: A contingent valuation basically describes an environmental scenario and therefore estimates the value attached to the particular environmental change scenario. Individuals would therefore reveal their willingness to pay (WTP) for the change. In other words, this sort of method evaluates an individual’s willingness to pay or accept a specific change in environmental attribute. In order for the survey to be effective, respondents a required to understand what’s being valued and have a sense on how they would be willing to trade off between changing environmental attribute and income.