An attempt is made in this Chapter to analyses the economic performance of MSRTC in Kolhapur division based on selected indicators. The entire division is divided into twelve depots, viz. Kolhapur, Sambhaji Nagar, Gadhinglaj, Ichalkaranji, Gadhingla, Ichalkaranji, Gargoti, Malkapur, Chandgad, Kurundwad, Kagal, Radhanagri, Gaganbawada and Ajra. The activities of the MSRTC are governed by the corporate objectives set by the RTC Act. 1950. The main objective as indicate earlier are to provide efficient, adequate, economical and co-ordinated transport services to the laymen. However, it is to organise itself on business terms, while achieving the aforesaid objective.

For any Road Transport Corporation the main and utmost important financial performance indicator is cost per Kilometre, because it together with CPKM decides the fare. The profitability of an organisation is a function of both costs and prices, which are equally valid in the case of the passenger road transport industry too. An organisation may incur loss either because the costs go up, the price remaining the same or costs remaining the same the price/fare may fall. The second phenomenon of fare coming down does not ordinarily arise in the case of passenger road transport industry for reasons of relative inelasticity of demand for the service monopoly rights conferred on the services and state regulation of fares.

The cost of operations in absolute terms does not by itself indicate measure of costs. Costs have to be worked out to compare the cost of providing the service with the rate of earnings. Cost per kilometre is one of such relative measure which is computed by selecting effective kilometre as a unit of measurement.

In the Road Transport industry two different types of costs are considered:

The industry incurs fixed costs relating to part of crew wages, general administration, interest and debt charges welfare expenses and part of workshop mechanical wage. This cost per Kilometre varies inversely with the kilometre range achieved but is constant in total rupee amount.

Variable costs are uniform per kilometre but fluctuate depending on the volume of activity in Kilometre. Under this head depreciation, HSD Oil, Tyres, Tubes and spare parts and included.

The earning per kilometre (EPKM) is computed by dividing the total earning of operations by the total effective kilometres. Revenue in absolute terms without reference to Kilometre will not correctly reflect the ‘Profitability’ of the operation. An Earning per Kilometre (EPKM) is one of the useful ratios to indicate the earning potential of a route/depot/division organisation. The EPKM is related to the carrying capacity of the buses, fare structure and the earning potential of route. The EPKM is calculated by dividing total earnings by total effective Kilometres. EPKM is calculated by the following formula –

The EPKM is expressed in terms of Rupees. The EPKM may be in relation to either traffic or gross revenue.

Economic performance of Kolhapur depot is explained in the following table: 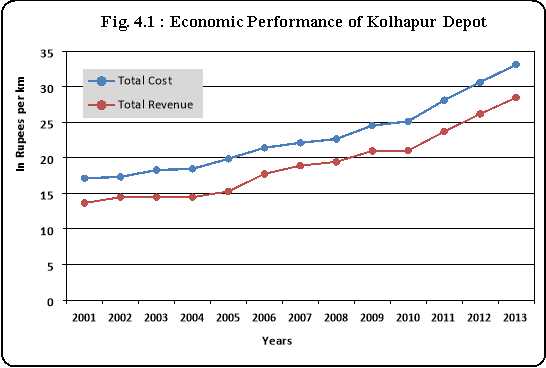 Above figure No 4.1 reveals the trends in the total cost and revenue, it is found rising in almost same manner. Hence, there is not so much variation in margin, it always perform negatively.

The economic performance of Kolhapur depot is not up to the mark, in the study period variable cost, fixed cost and total cost of continuously increased, comparatively rate of variable cost is highly increased i.e. SGR 129.48 and fixed cost SGR is 52.30 and total cost SGR is 93.35. The average of variable cost, fixed cost and total cost (CPKM) is Rs 13.65, Rs 9.34 and Rs 22.99 respectively. In the same duration SGR of EPKM is 108.41 and its average is 19.15. Average margin of CPKM and EPKM is Rs. -3.85. It is clear that in the study period, Kolhapur depot experienced loss in the investigation period.

Economic performance of Sambhaji Nagar depot is explained in the following table:

Above table No 4.2 depicts cost and receipts as per kilometre of Sambhaji Nagar depot during last 13 years. Its variable cost increased from Rs 9.50 to Rs 19.36 with Growth Rate of 103.79. Fixed cost also increased from