These mining activities contribute to Indonesia’s Gross Domestic Product (GDP). Together with oil & gas and quarrying, mining sector accounted with 7% in real GDP at 2012 (at constant prices). Even though this sector does not contribute more in contrary with another natural resource e.g.: agriculture, livestock, forestry and fishery with 12% contribution in GDP, mineral sector still contribute USD 61.3 billion in Indonesia’s total GDP of USD 875.72 billion 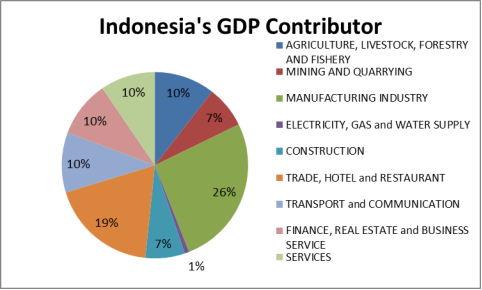 After spending almost four years discussion in the House of Representatives, on 16th December of 2008 the parliament members agreed a new mining law, replacing old mining law which had been applied almost 40 years. This new mining law officially signed by the president on January 2009 and the law is known as Law No.4/2009 Concerning Mineral and Coal Mining (Syahrir, Bongaerts, & Drebenstedt, 2013).

The government’s purpose to implement this new mining law is not only regulates the contract term for foreign investor company and obligate them to have a mining license, but also better environment and increasing added value of mineral resources (Syahrir et al., 2013).

Furthermore, the Ministry of Energy and Mineral Resource (MoEMR) also issued a regulation no.34/2009 in order to control production and export of mining product. This is reflected from article 5 MoEMR no.34/2009 which stated:

This policy issued as government want to ensure the supply for increasing domestic demand. With this Ministry Regulation, the company may export their production, but is encouraged to fulfill domestic demand which calculated by Domestic Market Obligation (DMO) (PricewaterhouseCoopers, 2012).

Despite this new mining law was signed on five years ago in 2009; the effect will be enforced on 12 January 2014. Therefore, after 12 January 2014 the mining company cannot export mineral unprocessed. This situation is totally different when in the old mining rules regime[1], the mining company still allowed to shipping the mineral ores directly to their buyer; industrial countries, such as: China, Japan, EU countries and United States.

At that time the mineral ores are exported and then processed by the buyer in order to add the value of ores product. Later, Indonesia’s industry sector will import the metal product to supply their production (Syahrir et al., 2013). For example: Indonesia shipyard industries have to import steel from China where the China’s steel plant produced steel from Indonesia’s iron ores.

Based on this situation, the idea of adding value to mineral resource in Indonesia came to surface. And later the President of Indonesia Republic signed it as the new mining law. This law and regulation will close the mining company’s curtain to export the mineral resources directly to the buyer unless the mineral is processed domestically.

After the new law has been signed on December 2009, the mineral resources have to be processed or extracted in domestic smelter or extractor. In the other hand there are only three available mining refinery in Indonesia by 2012: PT Aneka Tambang, PT Indonesia Asahan Aluminium and PT Smelting (Hogan Lovells, 2012). After another regulation MoEMR reg. no.7/2012 come into force to mandate the mining companies to increasing the value through mineral processing, some mining company are intended to invest smelter in Indonesia which are: PT Vale Indonesia, PT Freeport Indonesia, PT Newmont Nusa Tenggara, PT Weda Bay Nickel, PT Jogja Magasa Iron and PT Agincourt Resources.

Those mining companies should build mining refinery in order to comply the law even though they are facing uncertainty condition to build a smelter caused by unrealistic deadlines and unclear concept of Contract of Work (CoW) (McBeth, 2014).

Indonesia’s inconsistence policy and high risk investment made the companies considering build a smelter are decreasing (Jensen & Burton, 2014). This unprepared mineral refinery industry to anticipate the new mining law is being unhealthy to Indonesian mining sector as their ore cannot be shipped.

Fortunately, the government already received several refinery plant proposals coming from domestic investor and foreign investor. However only three are expected to start the project this year with takes at least 5 years to complete (Jensen & Burton, 2014).

4 The Effect of Mineral Law

As mentioned above, there is some increasing amount of mineral ores in mining companies’ stock pile as it cannot be shipped over the world. After the new mining law has been applied, the export activity especially in mining sector is decrease which can be shown by following figure: 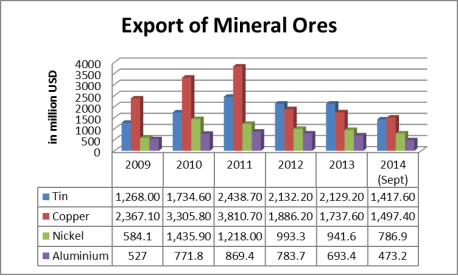 The figures describing the export of mineral ores; especially: tin, copper, nickel and aluminum. After the new law has been signed, the mining companies start to boost the production in order to add extra revenue before they could not export the ores unprocessed.

When the MoEMR no.7/2012 released to mandate them to increasing mineral value added, they start to slow down the production as they cannot export directly to their buyer.

This condition also affecting Indonesia’s GDP growth as the mineral trade also contribute to Indonesia GDP as shown in previous table. From nine sectors of GDP contributor, only mining and quarry sector which decrease consecutively in 1st quarter and 2nd quarter of 2014. Throughout the first quarter of this year, the value-added mining and quarrying decreased about 0.38% when compared with last year in the same quarter. If calculated based on constant 2000 prices, the value added produced by the sector in the first quarter of 2014 was only Rp 48.2 trillion. The figure is lower than the first quarter of 2013 amounted to Rp 48.4 trillion and fourth quarter 2013 amounted to Rp 50 trillion (Central Bureau of Statistics, 2014).

In the short run, the result of new mining law is negative to mining trade activity and to national income growth. In the long run after the smelter built, the mining sector will increase again and the domestic industry also growth since the mineral ores should be processed domestically. As the result, in the long term this law will lead greater national income growth.

[1] The mining predecessor law no.11/1967 used over than 40 years in Indonesia mining industry. At that time, the mining company which most of them is foreign investor act as contractor under government and tied with Contract of Work (CoW) agreement (Gandataruna & Haymon, 2011)