An analysis of Peter Cai’s article: “Iron ore the victim in Beijing’s smog crackdown in the Business” Published the 26th of February – 2015 in the website businessspectator.com.au

Peter Cai’s article analyses the economic impact of the pollution produced by the steel factories in China and their repercussion in the steel market and the iron ore prices.

The article takes as an example the city of Hebei, one of the most important steel producer centres of China, which suffers one of the most critical pollution levels of its history. The province’s strategic location close to Beijing, the Chinese capital is a contributor factor to the increment of smog in the metropolitan area. The social pressure that arises from this issue is forcing the government to take drastic decisions with potential socio-economic impacts.

New environmental standards were created in order to regulate the emissions. The new policies have the power to shut down any factory that does not meet the minimum standards. This is creating a lot of pressure on the industry and forcing the steel makers to reduce output and, in some cases, to update their assets.

This new policies come in line with the Chinese economy slow down and the reduction of demand for the steel and its main resource, the iron ore. This has generated a crisis in the steel manufacturing industry that has seen a reduction of revenue and an increase of the operational cost in the last year.

There is a potential risk of massive plants shut downs due to an important number of the steel makers won’t be able to afford the high cost that an update represents. This is also a consequence of poor government regulations during the economic boom that did not stimulate the companies to reinvest the capital in new and cleaner technologies when the revenue was higher.

The social pressure has forced the government to take strong policies orientated to reduce the steel production capacity with the aim to minimize and control the toxic emissions. This represents a massive economic impact for the government which will be affected by lower tax revenue and potential increase of unemployment.

The Hebei province, well known as the biggest steel producer in China and the second worldwide, contributor of the 22.5 percent of the national steel output is facing a critical time. The reports demonstrate a fall of 0.6 percent from the total steel production in 2014 in comparison to the 2013 figures and China’s total production is expected to drop 1.07% to 814 million tonnes by 2015. (Stanway, 2015; the Australian, 2015). The main reason for this crisis is the reduction in demand for the Chinese market and the new environmental policies that restrict the operation of plants that exceed the new emission standards (Li 2013). This environmental issue has situated the province within the top 10 most contaminated cities in China and has been affected people’s health critically reducing life expectancy by five years (Cai P., 2015; Stanway, 2015). As a consequence, there is a strong social pressure that request fast solutions to a problem that seems not to have a sustainable solution in the short term.

This article address the following issues:

One of the most important parts of the article is the dynamic of the Chinese steel market and its influence in the iron global supply. In the last decade the Chinese demand and supply for steel have been growing consistently driven by the strong urbanization process (World Steel Association 2014). However, this figure is changing rapidly due to China’s growth slowdown and a shift towards an economic model orientated to consumption and less steel dependent. The performance indicators demonstrate that the Chinese steel markets not in shape (Serapio. 2014), face serious issues related to competitiveness, productivity, efficient logistics, infrastructure and technology. The chart below explains the relation between Supply and Demand during the last 7 years and the reduction in market growth as result of the deceleration. 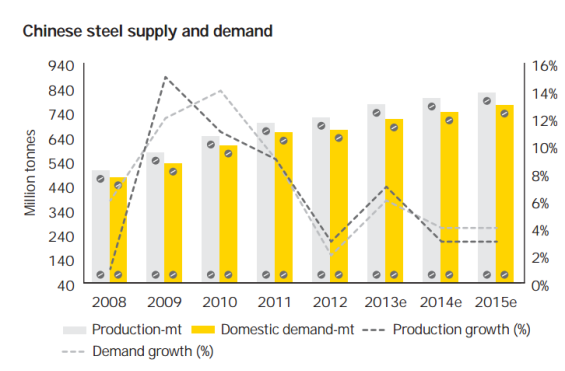 The effect of the reduction in steel demand has been reflected in lower steel prices as result of the existing excess of the capacity. The steel producers have no other option than become more competitive, orientating their efforts to improve productivity and reduce costs in order to maximize the profits. According Agrawal (EYGM Limited. 2014), this highly competitive scenario will lead to a flatter marginal cost curve along the productive sector, reducing the breach between the competitors. This means that any fluctuation in the market variables will affect most of the participants evenly.

THE PARTICIPATION OF THE GOVERNMENT

What is the position of the government? The Chinese government is facing two major issues. According Elliott (EYGM Limited. 2015), the two major contributor factors are the critical contamination levels in most of the major cities around the country as product of the poor regulation policy to the steel market and the socio economic pressure to maintain an industry that provides generous tax income and maintain low unemployment levels.

As result of social pressure the government decided to apply new regulation policies with the aim to reduce the actual steel production capacity. The new industrial emission standards give the government the tools to shut down the plants that don’t meet the new environmental requirements (Jiabao, Li. 2013). The article mentions that the pollution reduction technologies are expensive and under the current steel prices and many of the current steel producers are not going to be able to afford the investment. This exemplifies a clear normative economic, where the government identify a problem and prescribe solutions based on facts.

Un-employment is an additional impact that has to be managed by the government. According Cai’s article, “the new industrial policy could cost 200,000 direct jobs as well as another 400,000 indirect positions”. In the short term the chances of a rapid migration towards a cleaner and environmental friendly industry are almost impossible due to the economic situation that the China is facing at the moment.. Here is where the government must evaluate different tools like tax incentives in order to stimulate the migration to cleaner industries in the medium term.

One fact that was not mentioned in the article is that the government possesses participation in some factories; these factories receive incentives that allow them to operate even in loss with the aim to maintain levels of employment. This creates a clear dead weight loss for the government (EYGM Limited. 2014). The government subsidies are illustrated in the graph below: 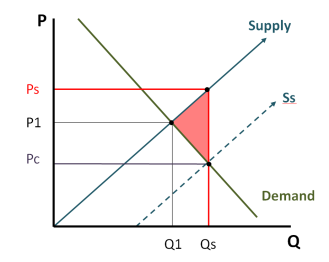 Figure 2 – Deadweight loss of government subsidy in the steel market.

P1 is the original market price for the steel and Q1 is the original demand. Pc is the price that the consumer pays after the subsidy whilst Ps is the real price including the subsidy. Qs is the quantity of steel produced as result of the subsidy, this represent inefficient production.

The area highlighted in red represents the deadweight loss to that the society pays as product of the government subsidy.

Cai’s article highlights the complex situation that the Chinese steel market is facing these days, as well as, the economic, environmental and social repercussion of its reduction capacity and the roll of the government in the market regulation.

The article makes reference to production figures that can be easily tracked and verified in diverse economic reports. There are two points that the article doesn’t cover in deep. The subsidies of the government to some steel makers and how this affects the supply and the effect of the Iron Ore price fluctuations in the Chinese steel market.

It’s clear that the social pressure is changing the traditional political Chinese scenario, characterized by their authoritarian decision making at the moment to approve and put in practice government interest policies. The demand for a better air quality reflects a new scenario where the politicians are willing to listen and negotiate.

The short term solution of shutting down factories that don’t meet the environmental standards is only a policy that can alleviate the current contamination but does not provide a sustainable solution to the underlying problems: Maintain the competitiveness of Chinese market under optimal environmental standards. Reduce unemployment and also guarantee the resources that the country required to continue growing sustainably.

The priority in a long term is to promote the development of more environmental friendly industries that can produce the high end products that China will require in the future. However, this is a big risk considering the investment and time required to transform an industry that has been considered one of the most traditional and important in China.