Economic Impact Of Migration To Households

1.1. Motivations for the Study

Migration as family strategy bring many benefits and consequences to the livelihood of migrant at destination and family left behind at origin. For migrants in destination, labour-market assimilation, is one of the factors that affect the gain of migration. For an urban area as destination, rural to urban migration result in urbanization and it contributes to the unbalanced distribution of the population in urban and increases disparities between rural and urban areas (Lall et al, 2006). For family left behind, remittances also bring many benefits such as an increase in family income, ease credit constraint and reduce risk and volatility, promote productive investment in physical and human capital, but also bring many consequences such as the potential losses of income and family disruption associated with migrants’ absences from their family and communities.

Therefore, proposed study will investigate the pattern of migration in Indonesia. Investigation will address the impact of migration to migrants as well as household sending migrants. Several justifications will be addressed regarding Indonesia as a study case.

First, Indonesia has long experience of transmigration and rural to urban migration. Migration to cities are relatively an unconstrained process in this country. It is urbanising and it is estimated that more than 60 percent of rural labour force will migrate to urban areas of Indonesia (Meng & Manning, 2010). Population censuses since 1970 to 2010 shows number of migrants is in increasing pattern either recent migrants or life time migrants (figure 2). Thus we can expect that migration either internal or international has become a household strategy to escape from the vulnerability of poverty. This highlight the importance of investigation on migration to the livelihood of people.

Second, in terms of international migration, there is increasing pattern number of Indonesia migrant workers and Central Bank of Indonesia with BNP2TKI reported that it reaches 4 million of workers in 2012. However we can expect that this data is underestimate both the real data of remittances and migration. The host country data report can show significant number of undocumented overseas workers and cross-border migration from Indonesia (Hugo, 2002). Migration corridors of Indonesia is Malaysia and other destination countries are Saudi Arabia, Singapore, Japan, Republic of Korea and Taiwan and Hong Kong (Figure 3). 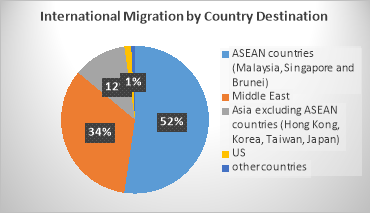 Third, Kreager (2006) migration within Indonesia is dominated by individuals aged 15–29. International migration by Indonesians takes by skilled and mostly unskilled to neighboring country Hugo (2007). Meanwhile, internal migration has been a household strategy and it is much proved after the occurrence of late 1990s Asian financial crisis when a great many workers returned to their villages of origin, having lost their jobs in the cities (Wiradi, 1998; Sandee, 1999) but followed back to urban due to lack of employment in rural (Hugo, 2000; Ananta 2000). Remittances send by those productive age migrants will very much contribute to household sending migrants at origin.

Fourth, there are around 68 million Indonesian people living just above the poverty line and are thus vulnerable of falling into poverty. People in vulnerable category will very much likely to fall into poverty in times of shocks. Crisis, inflation, job loss, Illness and disasters will likely to be the trigger to fall into poverty line. Migration to urban centres becomes family strategy to overcome unemployment and poverty either caused by lack of access to land or other productive resources in rural (IFAD, 2014).

Fifth, poverty reduction progress in Indonesia continues to slow down. Although the poverty rate in 2014 is 11.3 percent decreases from 24 percent in 1999 however inequality increases. The gini coefficient, a measure of consumption inequality, has increased from 0.30 in 2000, to approximately 0.41 in 2013 the highest point ever recorded in the history of Indonesia. The inequality has increased over the last five years from 2008-2012 (table 2). The proportion income of the richest 20% of the people increased from 41.2% in 2009 to 48.6% in 2012, while the proportion of income 40% poorest decreased from 21.2% in 2009 to 16.9% in 2012 (Figure 4). Rising inequality makes escape from poverty more difficult. 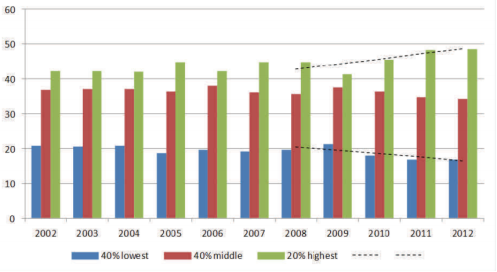 Sixth, although urban poverty rates are relatively low and well below the rate in rural areas, but the gini coefficient for urban is higher (0.43) than in rural areas (0.33) in 2012. Moreover, it is estimated that the absolute number of urban poor will continue to increase as Indonesia urbanizes from 45 percent to an estimated 70 percent by 2030 (World Bank, 2013). Urban poverty is projected to surpass rural poverty by 2020 (World Bank, 2013)

In addition, regions contribute differently to national urban poverty. The urban poor are concentrated in Java. This is a most populous and highly urbanized island which contribute to more than 67.6 percent of the Indonesia’s urban poor, followed by Sumatera (table 3). Rates of urban poverty vary substantially across regions, under 10 percent in Java, higher in Sumatera (12 percent), and generally high in smaller and Eastern regions, particularly Nusa Tenggara (24 percent) (Table 3).

Seventh, rural poverty is higher than urban poverty in most developing country particularly Indonesia. In 2010 rural poverty account for 16 percent and characterised by less educated and occupational patterns with relying much more on agriculture/extraction work, less on industry and services, more likely to be self-employed and less likely to be wage-employed. At the same time, urban poor also has similar characteristics such as low education levels, work in the informal sector with low wages, live in low quality housing, lack tenure security, and have lower access to basic services than the non-poor. Given the characteristics of rural poor, we would expect that migration from rural to urban will bring many consequences to urban as area of destination. In regards to Indonesia, Meng & Manning (2010) highlighted that urban slum areas have been a constant feature of the urban environment over the half century and have increased in absolute size.

Eighth, Indonesia is now classified as a lower-middle income country, however there is relative disparity between eastern and western regions. Eastern provinces of Indonesia is characterised to be less developed and has a relatively low level of GDRP per capita, the household size and labour participation rates higher than the national average, four provinces have a lower minimum wage compare to the national average and two of its provinces are significantly poorer than the national average (CBS, 2012). Moreover, Food Security and Vulnerability Atlas (FSVA) of Indonesia show that 79 out of 100 districts which were most vulnerable to food security are in this region (WFP, 2009). Reducing poverty, food insecurity and regional disparities remain a major challenge of Indonesia development.

Ninth, income from agriculture contribute more than 50 percent to the reduction in poverty achieved in selected developing countries during 1980 to 2005, about 35 percent of growth in remittances , and the rest is due to growth in non -farm incomes (OECD 2011). This highlight the importance of remittance to the livelihood of household sending migrant (Figure 5). 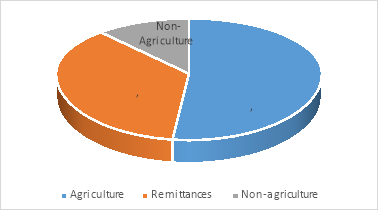 We expect that the disparities and unbalance development between rural and urban, and between western and eastern regions of Indonesia will significant to increase the number of internal migration within this country and furthermore differential income between neighbour countries will continue to attract international migration. We will explore the impact of migration to household food consumption and link it to food security, together with its impact on health and urban poverty.

The main objective of this thesis is to analyse the economic outcome of migration to the wellbeing of household sending migrants in sending area as well as the migrants’ wellbeing in destination area. Under this major objective, following research questions will be addressed.