The benefits of international students in British economy:

It is clear that the foreign students come with a lot of benefits. The direct benefits are showed in term of fee income, subsistence expenditure and spending with friends and relatives.

As a report shows that student spending supported over £80bn of UK economic output, which is roughly one third of the total contribution of the aviation sector to UK GDP1,and generated over £25bn of Gross Value Added ( GVA ). ( nef consulting 2013 ). The number of this report can show that spending on transportation wich is by international students is a large part, the UK can get a lot of profits from international students. International students daily life in the UK, they must spending on the necessities of life such as food, closes etc. It also can give profits to the local business such as restaurants supermarket and cloth shops etc. It is a good thing for the UK to get a economic growth. That is the direct income of it. 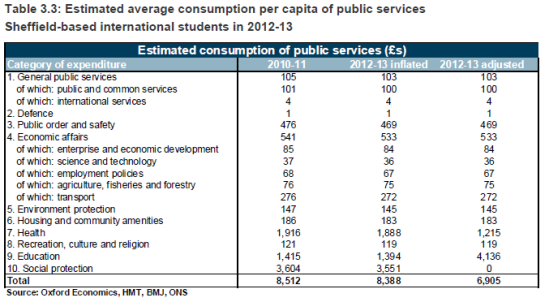 Next, I wold like states that the indirect income of foreign students for the UK’s economy can be showed in terms of business services, logistics, wholesale, and Utilities. The total population is increased by international students come, the demand of sensitive goods will be increased and increase on these things will lead to business services, logistics, wholesale, and utilities also increase. Because the demand of goods has a increase by foreign people come in, the output of the UK also can be increased, wich means there are more people be needed to work in other words there are more jobs for unemployed people, it is a very good way for solve the can supports 833,803 jobs throughout the UK it is up to 2.8% of British employed population. There are some negative things of unemployment: for individual, unemployment will lead to loss of earnings, lower standard of living, loss of skills and depression.

For firms an unemployment will lead to fewer sales, a larger pool of candidates to choose from, easier to make workers redundant and easier to refuse pay rise demands.

For hall economy an unemployment will lead to lack of economic growth and international less competitive.

Unemployment is a lagging indicator for economic if there are less unemployed the economy will be better. In addition, the full employment is one of the main macroeconomic aims wich are the UK focus on. ( macroeconomic means whole country )

It can be seen that the students who are non-UK national study in the UK can bring a lot of advantage things for the UK’s economy. The less unemployment is the indirect income of international students for UK’s economics.

All of these things are indirect income of international students for the UK’s economy.

The cost of international students in British economy:

There are also some cost of foreign students in British economy, and it is can be divided into direct cost and indirect costs. The direct costs include consumption of public service and congestion. The indirect costs also can be showed in terms of business services logistics wholesale and utilities.

International students’ come cause an more expend to public services, wich means government should spend more fees on public services. On the other hand, as more and more international students come in, the densely populated area will to be more and more, it means a congestion appear because foreign students come in. The cost of these is stated that According to the latest National Transport Survey 27% of the average distance traveled by drivers was for commuting or business purposes. This implied that the marginal cost in terms of lost GDP was £584 per driver. ( OXFORD ECONOMICS 2013 ) ( the marginal cost is the increase or decrease in costs as a result of one more or one less unit of output ) This marginal cost shows that a lot of students who are non-UK national study in the UK may cause a indirect loss fee of people who are British nationality.

Moving, as the international students come the nature source will be consumed quicker than before. It is a serious problem that the land and the nature source is limited if the source use over it will lead to a negative economic growth. A good economic growth should be stable and sustainable, and it is one of main macroeconomic aims wich are the UK focus on.

Is the benefit bigger than costs of it?

Of course yes, as a table shows that in general, international students estimate direct contribution £120 million sub-regional GDP and £147.5 million ( including indirect and induced effects ).The Numbers at the regional level of £131.5 million and £176.6 million respectively. ( OXFERD ECONOMICS 2013 ) This numbers signify that the incomes tower over of the costs of international students study in the UK in the other words the benefit is bigger than costs of foreign students study in the UK.

It is also be claimed that it is widely acknowledged that the students and graduates of higher education to provide significant for long-term economic benefits.Evidence suggested in this report, the students’ contribution to the economy can also be significant in the short run.The contribution of students spending is the student’s direct positive impact of the economy.Therefore, future research can combine both short-term and long-term interests and compare them with the cost of higher education investment, including opportunity cost such as already tax receipts.Future research can also be compared with state subsidized student spending, to cause the tax breaks to see if there is a short-term “loss” chancellor of the exchequer, or not.In fact, the traditional reason to assume that short-term losses can only by the compensation from a long-term interests of the labor force is derived with higher education.This indicates that even short-term benefits outweigh the higher education public spending will mean to the real return on investment of higher education may be much higher than the previous advice. ( OXFERD ECONOMICS 2013 ) SO, in totally, the impacts of foreign students in the UK’s economy is advantage.

Although, there are some cost of nature source, the income can give enough compensate for the costs of it so, there are more benefits of alow more international students come in the UK to study.

The benefits in it include the more fee income, more output and less unemployment for the UK’s economy.

The costs in it include the costs of congestion and costs of public goods and services. The serious problem is congestion,wich has negative for local people who are driver ( loss £584 per driver ).

Overall, given the characteristics of international students, outlined in the introduction, it seems highly likely that their net fiscal impact is positive. This benefit will accrue to those already resident in the country as the government will need to generate less tax revenue per capita (of existing residents) to fund current government spending.( Meanwhile, Rowthorn (2008) in his survey of the relevant literature suggests that “Highly skilled migrants normally make a large fiscal contribution, whereas unskilled migrants are likely to impose a net cost on native taxpayers if they settle in the receiving country ).