Economic Analysis Of Coffee In Vietnam

Vietnam coffee market structure is oligopoly, because there are a few firms that have the ability to enter this industry, and with many similar product taste (Sloman, Garratt, 2013). The production of coffee is expensive, it include land, machine, labor, and material. Coffee only grows in high land area of Vietnam, so the investors have to buy large land and burn forest. The labor forces are the farmers, who have years of experience on growing coffee, are paid to grow the coffee to export over sea. Due to coffee planting become popular in Vietnam, Vietnam coffee production surpass Colombia to become the second largest coffee producers. (The popularity of coffee More over, there are also some brands of coffee product such as: Trung Nguyen, Y 5, Vina, etc. Most of Vietnam coffees are export to countries such as: England, United States, Japan, Korean, Hong Kong, Italy, etc.

Vietnam has many coffee distributors, so there will be many different prices of coffee. Coffee price will also change because of the world market price change everyday. However, Drinking coffe is a Vietnamese’s culture for years so even if price change the customers are still buying the coffee. Coffee makes people focus, smarter, gain energy, release stress (Gunnars, 2013) . Because coffee is consisted of caffeine, so some of customers cannot quit coffee. And it takes a lot of time to find other substitute or to stop drinking coffee. Coffee Culture is increasing can also make consumers demand more coffee than before. Rise of other culture coffee makes consumer curious and want to taste the different coffee style. And young people also drink coffee to prove that they are already grow up. base on the survey of director of Thu Ha company, Thu Ha company produced 100 ton per year but only 30% of product was exported and the rest was consumed in domestic. It proved that the demand of coffee in Viet Nam is very high and it also attracted some of big coffee distributor come to Viet Nam such as Starbucks and Coffee Bean and Tea Leaf.

The growth of Vietnam coffee productivity has entered the world market and became the second largest coffee producer, after Brazil. Beside the growth of production, Vietnam’s coffee culture is also well known with the unique brewing style. More important, coffee is the daily need of Vietnamese people, because they need coffee to make them stay awake and gain energy to focus on work. Even though price of coffee is change due to price change, coffee it self will not decrease the quantity of coffee supply.

Base on the Hallam research, Vietnam coffee production is a strong producer, which can expand from 60 578 hectares to 463 450 hectares and coffee bean output increased from 96 000 tones to 800 000 tones, making Viet Nam the largest Robusta producer and second largest coffee producer in the world. This result the increase of income of employment and decline the hunger rate. However, price of Robusta coffee has fallen because of the Arabica coffee had also fallen. Against this background, the coffee price elasticity of supply is very low, which is only 0.13 in short run and 0.24 in the long run . Supply responses to price incentives are not balanced: periods of rising prices stimulate new plantings and other fixed asset investments, which does not change when price fall, it can not be replaced when it reach to the end of production. Supply responses to falling prices have also been slowed in some cases by national efforts to assist producers, for example through price supports and debt relief. In the short-term adjustments can be made to reduce inputs including labor, but creating unemployment and stimulating migration. Reduced labor input through makes the coffee are less care, which lowered the quality of coffee and also create a pressure on price. ( Hallam, 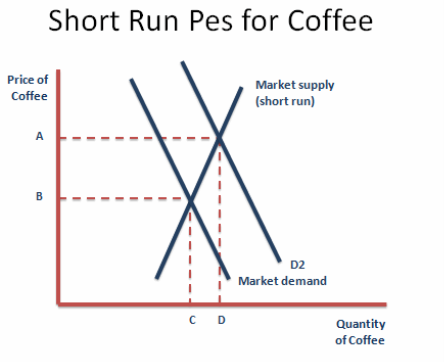 Opportunity cost is the alternatives consumers or producers have to give up when deciding purchasing or producing.(Sloman, Garrett, 2013) When people have to make choice they have to lose the other alternative that involves. Opportunity cost occurs in simple purchase to complex purchase. Purchasing coffee also occur opportunity cost, the consumer may decide the good that they want, so they can satisfied their simple needs. Normally, consumers who want to have a coffee cup to be more awake and focus on their work will have to scarify some of their alternatives to get the cup of coffee.

Money: The first alternative that people have to pay in order to get their coffee. When consumers decide to get a cup of coffee, they have to know the price of coffee that they will buy. The amount of money they spend for the coffee is the opportunity cost to get the coffee for them. However, the consumers give up the alternative of saving money, spending on other substitute, or even invest on a business. A cup of coffee may not cost the consumer a lot of money, however if the consumers buy coffee everyday may cost them more than what they think.

In order to get a cup of coffee, customers have to sacrifice some of the alternatives to get the coffee they demand.

The report aim to learn and understand the characteristic of the strongest product of Vietnam, which is coffee. More over, we can also learn what is the position of the product in the world market. In the report, we learn about the market structure, the demand, the supply of coffee, the elasticity of demand and elasticity of supply. In the report our group learn about four facts: First, the Vietnamese coffee market structure is Oligopoly, which has a few firms can enter and produce similar product. Second, The elasticity of demand and supply are considered inelastic, because of price cannot change the supply and demand of coffee of Vietnamese people. Third, the opportunity costs in order to buy a cup of coffee. Last, analyzing the demand and supply of Vietnamese coffee. Coffee has been a strong industry for year, however coffee supply has decreased the quantity and the quality by the countries, which import Vietnam coffee. In order to make the Vietnam’s coffee become acknowledge for both quantity and quality, finding solution and make changes in production are required to boost the production.

The event mention about the increase in price of coffee not only in Viet Nam and in the world because that is affected by the drought in Brazil. In details, during the early 2014, a seriously drought is destroying the coffee farms in Brazil which is the biggest exporting coffee countries in the world. This would not be good news for farmers but that is great news for other exporting countries in which have Viet Nam. That also affects the selling price in Viet Nam market, the selling price for coffee increase rapidly during the early in 2014. According to this event, the reason for increasing selling price for coffee also concern about the speculation of firms and other organizations. For the Arabica coffee, it increases more than two times than the first days in October, 2013.

After drawing the curve of supply, we can see how the drought in Brazil affect the supply for coffee. Especially, the supply for coffee is very sensitive with the weather. The weather can easily affect the productivity of coffee. Of course, the supply curve will move to the left, from S1 to S2 in the curve. In this case, with the impact of the drought, it makes the selling price increase from P1 to P2 because the productivity is less than before. In some cases, the price of coffee will increase slightly because the demand for coffee is elastic but in this case, many factors combine together from the impact from the weather and the speculation of people, which lead to the big increase for selling price of coffee. The gap from P1 to P2 will much bigger than other situations. When the selling price increase, that is also a main reason why the number of people wants to buy less than before, Q1 will move backward to Q2 as well. The changes in quantity of demand for coffee will decrease follow the changes of selling price. Because the changes in the supply curve above, the new equilibrium point will move to the new point which is from E1 to E2. After analyzing the impact of the event to the supply curve, coffee can easily be affected by the outside factors such as: environment, weather and people.

Summary the event: in a role of apprentice, somehow the reporter was got into a factory which is producing fake coffee in Hoc Mon . Reporter was following the factory’s owner to Kim Bien market to buy 15 arsenical material such as smell of coffee flavor, foaming agent for soap, food coloring industry and many more and blend with soya bean. Only in one day that factory can produce 1 ton of Fake coffee and deliver to lot of coffee store from middle of Vietnam to South of Vietnam. And when reporter asked about why don’t you sale the real coffee then the owner of factory just give only one reason that about the price, the real coffe was cost over 200.000 VNÄ but fake coffee only cost over 100.000 to 120.000 to produce and sales.

After drew Demand curve, we can see how the scandal of produce coffee from soya bean mixed with arsenical affected to the demand of coffee. After the true was exposed on newspaper, the consumers scared to drink coffee and switching to another substitutes, then you can see the demand curve moved from D1 to D2. It makes the supplier decrease the cost to attract the consumers, at the curve you can see that P1 move to P2 and it makes a new equilibrium from E1 to E2, and besides that the quantity of coffee also move backward from Q1 to Q2

Hallam, D., ‘Falling Commodity Price And Industry Responses: Some Lessons From The International Coffee Crisis’, Food and Agriculture Organization of the United Nation. Accessed: March 31, 2013, from: