Calculating Gdp And National Income Of The Us

The economy of both the country effect the GDP of the US. I also wrote about national income and the way to calculate national income . The growth of GDP in the US is because the good and services that is exported. What causes the growth of of GDP increase when both of the country economic grow rapidly . Macroeconomists study aggregated indicators such as GDP, unemployment rates, and price indices to understand how the whole economy functions. Macroeconomists develop models that explain the relationship between such factors as national income, output, consumption, unemployment, inflation, savings, investment, international trade and international finance. In contrast, microeconomics is primarily focused on the actions of individual agents, such as firms and consumers, and how their behavior determines prices and quantities in specific markets.

National income is the total value a country ‘s final output of all new goods and services produced in one year . Measuring the level and the rate of growth of national income ( Y ) is important for seeing the rate of economic growth , changes to average living standard and changes to the distribution of income between group within the population . Furthermore , the labor and capital of a country acting its natural resources produce annually a certain net aggregate of commodities material an immaterial including services of all kinds . There are three distinct flows of income , output and expenditure . Each of can be quantifiable and hence may be used to measure National Income .

GDP (Gross Domestic Product) is the monetary value of all the finished goods and services produced within a country’s borders in a specific time period. Through the GDP is usually calculated on an annual basis . It includes all of private and public consumption , government outlays , investments and exports less imports that occur within a defines territory .

Export is a function of international trade where goods produced in one country are shipped to another country for future sale or trade . Moreover , sales of such goods adds to the producing nation ‘s gross output . If used for trade , exports are exchanged for other products or services . Exports is one of the oldest forms of economic transfers , and occur on a large scale between nations that have fewer restrictions on trade , such as tariffs or subsidies . 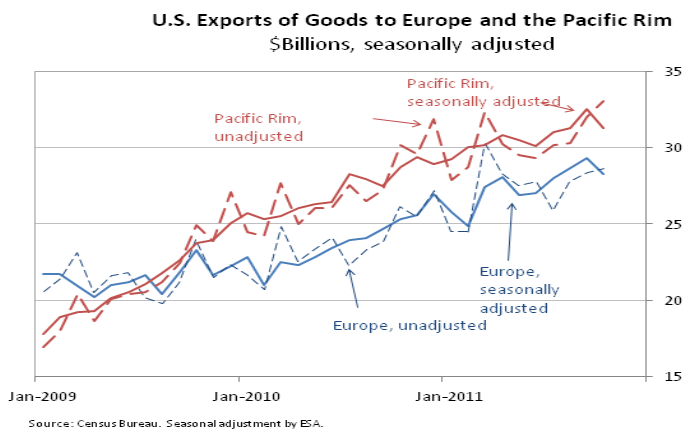 Graph of Export of US To Europe

2.1 Graph of Export of US To Japan

Japan has had some difficult times , but its economy is still vitally important to many US business . Exports to Japan totaled $ 60 billion last year . And so far this year they are running 10 percent higher . Japan ‘ s economic growth took a dive because of the natural disaster , but 2012 will clearly be a bounce – back year , fueled by rebuilding as well as the general economic strength of the areas not directly affected by the earthquake and tsunami In subsequent years , growth is likely to taper down to Japan ‘ s sustainable long – term growth rate of just over one percent .

Lastly , the growth of GDP of US rises because of the goods and service that has been export to Europe and Japan increases . This is the reason why the GDP of the US increases .

The main difficulties which are involved in the measured of national income are following :

The first problem is non – availability of statistical material . Some people like electricians , plumbers do some job in their spare time and receive income . The state finds it very difficult to know the exact amount receives from such services . This income which , should have been added to the national income is not recorded due to lack of full information of statistics material . Secondly , the danger of double counting . For example , while computing the national income , there is always the danger of double or multiple counting . If it is not taken care in estimating the income , the cost of the commodity is likely to be counted twice or thrice and national income will be overestimated .