Dohuk governorate is known as mountain resort destination. It has ancient archaeological sites during all four seasons Dohuk has beautiful views which made it to be one of the best tourism sector of Kurdistan. The city is the point of joint between three parts of Kurdistan (Syria- Turkey- Iraq) therefore it has a strategic location (‘About Duhok Governorate’, 2014). This governorate is considered as one of the most significant and important governorates especially in historical and geographical sides. According to (Shingaly, 2013) because of some points like (the rapid pace of urbanization, moving from other cities to Duhok and the increasing migration from rural to urban areas) economic and social problems of population are increased. It needs commercial projects within the city with a clear plan scheme. The random distribution for commercial uses was due to the lack of a clear plan. Several issues rose from changing the Duhok master plan of land use from residential use to commercial. This affected traffic congestions change of the urban pattern and townscape, less contract of shopping and malls. This essay will address strategic action plan plans for developing the economy of the city of Dohuk with adequate developmental programs for the city. Local economic development makes it easy for Counterpart staff and partners to engage in the process of local economic development planning. This will help stakeholder to find common issues and develop a strategy that will fit key market opportunities. Also to identify quick-win projects to generate jobs opportunities, increase local competitiveness and attract more stakeholders to buy-in (‘Economic Development – Economic Development – Government of Yukon’, 2014).according to (‘Ministry of Planning, Kurdistan Region’, 2014) There are several factors that has affect or prevents the economic development.

The first factor is lack of information and transparency. Dohuk’s directorates and main offices must dedicate itself to serve people in a clear way. To achieve this, the ministries should follow data and regulations. It will help local business owners and international investors to make informed decisions that will make economy grow if they have international standards of transparency and accountability. The second issue is inefficient banking system. Any country or city that wants to be successful in business and gain economic development needs a modern banking system. The banking system must be connected to world class financial institutions and build trustful relation with investors and business men/women. The third factor is educational system, which is a very important factor that needs to be taken seriously. Educational system must meet the demands of market economy. It needs to produce the skills and abilities that could help develop economy. Some certain sectors should be given more attention; in addition of English and Arabic language there should be trainings within these sectors to gain more responsive to the market and local development needs. The last factor is not having a good infrastructure. KRG should upgrade basic infrastructure and invest in it as they are one of the important factors to help economic development. The purpose of this economic development plan is to give a better quality of life to the citizens of Dohuk city and attract more people to invest in new businesses. Creating more jobs and developing existing businesses.

Dohuk city’s mission is to provide and strengthen the demands of economic market. As the population of the city grows it needs business creation and reducing the rate of unemployment by creating new jobs. Attract foreign companies to invest in the city’s development and retain the companies within the city. Also getting support from KRG to help develop the economy of the city is a major point. If the city can achieve businesses to invest in residential, commercial, industrial and institutional projects, the citizens will be able to enjoy a wide range of various outdoor activities. The mission is to make the city the most desirable place to live in in the region. The mission is to gain economic and social benefits (Tutor2u.net, 2014). Such as improving living standards it can cause capita income rise and reduce in poverty. The accelerator effect of growth on capital investment, rising demand and output encourages investment in capital – this helps to sustain GDP (Tutor2u.net, 2014). Making the city richer also to have more resources available to spend on public and serving people including environmental benefits. Most important is the Benefits from growth driven by technological change (Tutor2u.net, 2014). 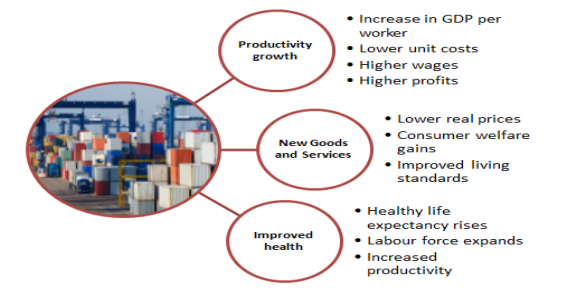 Dohuk city is encircled by mountains along the Tigris River. It has a growing tourist industry because of it beautiful weather and view though out the four seasons. The goal is to make Dohuk the main mountain resort destination. This will help economy development of the city, as well as financial and none financial support can be important point of this development. The other goals Dohuk city should achieve are, good quality of life for the citizen, better income, increasing the GDP, job creations, increasing investment.

Economic Condition of Dohuk City and Recommendations for Economic Development:

According to (Mop.krg.org, 2014) the urban population of the Kurdistan Region accounts for 79% of the total population. 41% referees to the three main cities Erbil, Dohuk & Sulaymaniyah. But the idea here is that rural structure is suffering from low growth rates mainly in Dohuk and Sulaymaniyah. The population of Dohuk is around 280,40017 inhabitants. They occupies 67.2 square km. The city’s expansion to the west is fast and it is close to connect with the district of Sumel. Dohuk has the capacity to accommodate population growth beyond 2020 because of its vacant land. The plan is to develop the city until 2032. (Mop.krg.org, 2014) suggested these points for economic development of Dohuk city

“• A phasing plan for urban development based on realistic growth projections.

• An infrastructure assessment of the existing built up areas to identify gaps in service provision and potential infill capacities.

• Two priority investment projects: the urban upgrading of the informal Gejabara area and the urban rehabilitation of the Dohuk city center”

Proposed Investment in Regional and Urban

Tourism is considered as of the fastest and biggest growing industries in the world. It is an attractive option for emerging markets. Dohuk city is still in the process of developing in tourism sector. it needs to resolve the existing problems such as infrastructure and site restoration as well as protection. This can make tourism to be contributor to the economy of the city. It is important to facilitate access for people, for visitors and for trade including roads, airport, rail, waterways. these high quality transportation is considered as significant support for tourism development. Dohuk has many ancient and beautiful archeological sites and artifacts which attract many visitors, historical treasures are found in these governorate including (caves, ruins and other antique yet to be found). Let’s not forget that this city is surrounded with mountains and its variation of weather, wealthy of water makes it the land of agriculture and tourism.

Factors that has negative impacts on Dohuk city’s tourism development:

Recommendations and plans to develop tourism industry, (Business, 2014) suggests these point to be focused on.

It is also needed for the Dohuk city to have a proper business plan for any sector of tourism, Explains purpose of the business, name, location, personnel needs, tourism business management staff, market sector, competition, marketing plan and financial projections (Business, 2014).

agriculture in Dohuk has been affected by poor government policies, conflict, international sanctions and not having technological and educational advances. There are different kind of tenures in this area. The first one is privet ownership, second is land leased by the governmentand the third one is herniated land. This makes the number of owner unmanageable.

According to (Mop.krg.org, 2014) factors that have negative influence on agriculture are as following

(Economics-exposed.com, 2014) suggests there are some stages where all countries should go through for growth. Traditional society, The Pre-conditions for take-off, The Take-off, The Drive to technological maturity and the Age of High Mass Consumption (Economics-exposed.com, 2014). Technology play important role in developing agriculture for those under developed countries to develop.

Role of Unemployment and Job creation in economic development of Dohuk City:

Rate of unemployment in Dohuk is high because creating business is a demand side theory for the growth of economy. Creating new business have advantages such as exporting goods and bringing money to the community, using available resources as an input in the production process, and community’s originality remains as its. Enterprise development is another beneficial factor for growth because it will provide jobs for citizens, layoff manufacturing workers, welfare to work requirements, and brings new technology to the market. It called second wave strategy of economic development. According (Koven & Lyons, 2010) Job creation development tools are considered as following

For Dohuk city to lower the rate of unemployment, the city must attract new business and facilitate for international companies to open their branch in the city, Encouraging people to make innovation and new ideas, Supporting people with new ideas with financial and nonfinancial issues. This will give chance for more business and less employment as a result.