Assess the system used by Glastonbury to sell tickets

In analysing the current ticketing system used by the organisers of the Glastonbury music festival, the key objectives are to review the existing system and compare this with an alternative system of allocating tickets to consumers: the London Olympic Games.

Every year, tickets for the Glastonbury Music festival go on sale in October, giving consumers that have pre-registered the chance to purchase a ticket for the UK’s biggest music festival. (BBC News 2013) In the most recent sale of these tickets, 120,000 tickets were sold within 27 minutes with over a million people accessing the website.

There’s something like 1,100,000 customers registered to go to Glastonbury, and they all want 135,000 tickets. It’s a shame but there’s nothing you can do about that. (Martin Fitzgerald, quote taken from Virtual Festivals, 2013)

With the latest ticket allocation, this means that there is market shortage for Glastonbury tickets as quantity demanded (1 million people) is greater than the amount of tickets being supplied (120,000 tickets in the current sales period). The current price of £220 for a ticket is not currently at the market clearing level as the supply of tickets is not equal to the demand for the tickets from consumers.

The number of tickets that Glastonbury can sell is limited in this instance to 120,000. Given the fact that the tickets sold out within 27 minutes, ceteris paribus, there is a large number of people who would be willing to pay a higher price for a ticket.

In the graph below, the current price of £220 (P2) shows that there is excess demand for Glastonbury tickets at that price, indicating that the price of the tickets are too low. The vertical line shows that there is a limited supply of tickets on offer (120,000 tickets) and in order to achieve allocative efficiency, the tickets must be allocated to those that value them the most.

As such, that is indicated on the graph at the equilibrium point (P*) 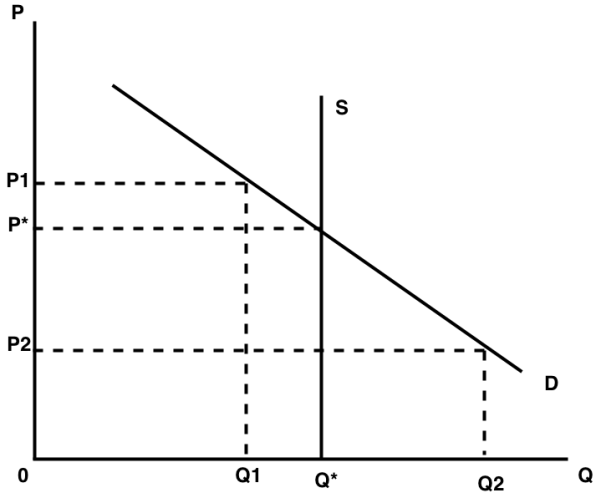 However, it could be argued that buying from a scalper could also help achieve a level of equilibrium, as well as achieving allocative efficiency for the consumers. Assuming that a customer at the point Q2 secured a Glastonbury ticket whereas a customer from the point Q1 did not, it would be allocatively efficient for these two people to make a trade.

As seen last year, four out of five people wanted to re-sell their tickets after learning that Metallica were booked to play at the festival. However, as they could not sell their tickets, many were left with tickets that they now did not want.

Were ticket scalping to be made legal by Glastonbury, the two customers at Q1 and Q2 could have made a mutually beneficial trade whereby the person from Q2 was able to trade their ticket to the person at Q1 who wanted to see Metallica play at the festival. This is allocatively efficient for both the festival and the customers involved. The person at Q1 manages to secure a ticket (At face value or higher dependent upon their willingness to pay), the person at Q2 is able to get their money back and dispose of a ticket they didn’t want and for Glastonbury, this trade means the person attending actually wants to attend.

It would appear that the event organisers are ‘resistant to the incentive to sell their tickets for a higher price’, setting their prices below the market level and thus limiting the demand to the number of tickets available. (Sloman Economic News 2014)

However, equilibrium could potentially be achieved by using an alternative system to sell tickets. Other events, such as the Olympics and the Commonwealth Games have used a ballot system of some kind in order to sell tickets.

The use of a balloting system has caused some controversy, chiefly with the London Olympics. Approximately 1.9 million people signed up for the Olympic Games ballot system and 1.2 million people ended up not securing a ticket after the ballot due to the price being set below market clearing levels. (ElectEcon 2011) [Is that actually true? The number of tickets here was also limited –like Glastonbury –couldn’t it just be the case that demand in both instances isn’t price-dependent?]

The Olympic ticket system worked by releasing tickets in phases, with the organising committee releasing some of the tickets on a daily basis. However, the system was limited in that once you had successfully made a purchase; you were unable to buy any more. Consumers were able to use this system in order to secure the most valuable tickets first, primarily the most sought after events including cycling, swimming and athletics.

While both the Olympics and Glastonbury using different systems, the fundamental problem remains the same. There is a fixed supply of tickets available and very high demand for those tickets.

If the prices for both events were set close to, or at market clearing level, those people who value the ticket the most will be the ones who actually purchase a ticket. In turn, this would lead to people who are ‘committed’ to the event, people who value the event higher than others. As it stands, both systems relied on luck and did not take into account the work that consumers put into securing the tickets. Many customers would spend hours on websites waiting for the tickets to go on sale, refreshing web pages but in the end, getting a ticket is down to luck. (Sloman Economic News, 2014)

The Olympic ballot system meant that some did not get tickets to the events that they wanted to see. Nevertheless, it has since been said that over 300,000 tickets were left unsold after the games and that despite this LOCOG (London Organising Committee of the Olympic and Paralympic Games) exceeded their revenue targets by 32%.

However, unlike the Glastonbury Festival, those who had purchased an Olympic ticket were able to re-sell the ticket to family or friends. In addition, LOCOG offered their own online re-sale platform which offered more security for both the seller and the buyer, unlike buying from someone in the street would offer.

The disadvantage to the Olympic ballot system is that if you wanted a ticket to see the men’s football team finals, you would not necessarily get that ticket. Bundles of tickets were released over a time period and you were allocated a ticket, so instead of seeing the men’s football final, you could end up with a ticket for the synchronised swimming. As LOGOC offers their own system for swapping or returning your tickets, this may not be seen as a problem. In practice though, those who have the tickets may find it time-consuming to go through the process of returning their tickets or attending the venues in order to sell them directly.

The Glastonbury organisers enforce strict rules in order to stop people re-selling their tickets to other people. They do this by making people register on their website with photo identification, effectively blocking the re-sale of your ticket to others as the tickets are personalised.