Arguments For And Against The Minimum Wage

Use economic theory and supporting material to discuss economic reasons in favour and in disfavour of an imposition of a minimum wage.

After careful and long consideration, the government in UK decided to implant a National Minimum Wage in April 1999. The wage is set to £3.60 per hour and £3.00 per hour for those who are 18-22 years old. (Economics Online 2017)The Low Pay Commission set up by the government did various research about UK and foreign countries, but there was only a few conviction what the effect will be on the economy. Some supported this decision and there also were some against it. In this essay I am going to try to analyse the effect of minimum wage on different markers and business groups.

A minimum wage is a legally mandated price floor on hourly wages, below which non-exempt workers may not be offered or accept a job. (Investopedia 2017). The main objective of the minimum wage is to give the people that receive wages with a standard of living above poverty. Minimum wage can be achieved by two different ways, either through trade union forcing the firm to increase the wage or through government setting a law to increase the cage. In the UK, the government explored and analysed the economy and figure out what should be the minimum wage be, and in what way it would affect the main problems in UK: unemployment and inflation.  The first report of the commission in June 1998 concluded that a minimum wage of £3.60 should be set up. The second report of the commission in February 2000 tried to analyse the effect of the National Minimum Wage had on the economy after the intervention. Their main conclusion was the minimum wage mostly benefit the economy.

Minimum wage legislation is an example of government intervention into the economy due to a market failure. In this case the market failure was that the worker were not provided a level of income that support their standard of living. The government had to provide support to the workers by forcing the firms to set up a wage that would ensure the standard of living of the workers. But this is a policy which the monetarist eonomists do not approve. However, to the Keynesian economist, it is acceptable to have minimum wages imposed if it trigger a multiplier effect and cause growth, especially where the problem is under consumption or the production possibility frontier(PPF) is too low for the economy. 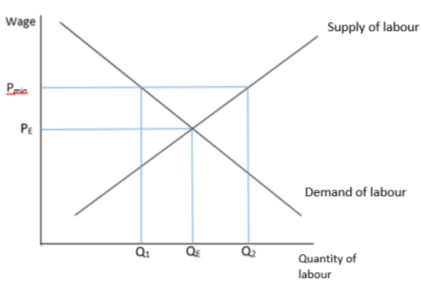 The main effect, base on the demand and supply theory, is that a minimum wage would lead to a fall in employment, which will cause a increase of unemployment rate. This can be seen from Diagram 1. The equilibrium wage was at PE, and the employment was QE. But with an increast in wage from PE to Pmin, the employment rate falls to Q1,. The supply of labour increases to Q2, which created an unemployment between Q1 and Q2. This is most likely to be unintentional unemployment since people want to apply for jobs, but the firm refuse to employ more workers due to the increase of wage. Nevertheless minimum wage still caused a negative effect on the economy. The unemployment rate is determined by the rate of minimum wages/ The higher the minimum wage is set above the equilibrium level, the more people will be unemployed. It s hard for the government to find a perfect rate to set since different markets have different rate before the National Minimum wage is instroduced and the effect of unemployment will vary in different markets.

The implentment of minimum wage causes structural unemployment. Structural unemployment is a longer-lasting form of unemployment caused by fundamental shifts in an economy and exacerbated by extraneous factors such as technology, competition and government policy. (Investopedia 2017). In this case, it is caused by the hike of the minimum wage, causing the firms to be more selective in their employing process, as they will more likely to employ people who has a higher education and more skilled. This decreased the employment rate of the lower educated population, hence causing a drop in employment rate. Also ,it will increase the competition of employees will increase, as the firm will be less willing to employ of keep the lower educated, inexperienceed workers, hence pushing them out and taking away their oppurtunity to gain experience and knowledge to enter a new firm. 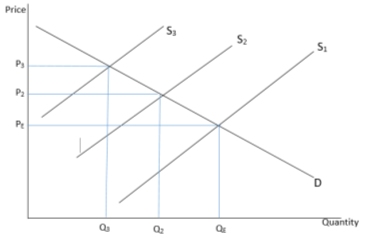 The firm may also increase the price of their products due to the increase of wage, in order to generate enough income to compensate their higher wage to the employees. As shown in Diagram 2, by increasing the price of the product from PE to P2, the supple curve shift from S1 to S2, the quantity of the product sell will be lowered from QE to Q2. If a lot of firms are doing this, this could ultimately create a imbalance to the equilibrium of the market, causing a overall higher cost of living, which then resulting a need for another raise of minimum wage, keeping the economy in a cycle of increasing wages. Which then the firms will have to compensate with the new minimum wage by increasing the price to P3, causeing supply curve to further more to the left, and lower the quantity sold yet again (Q2 to Q3). This may then leads to the product being overprice and causing the consumers to buy the product from a firm that sell the similar product, but in a lower price, this will cause the firm to crumble as they will not be able to earn more than the wage they are givig out, hence causing the firm forced to close down.

On the other hand, there are also a few positive effects caused by minimum wage. Although in the microeconomics level, there seem to be a disadvantage, but in a macroeconomic level, minimum wage shows an overall positive. Minimum wage ensure that the spending increases. When the spending in creases, aggregate demand(AD) inceasr and creates the Keynesian multiplier effect on the economy. Keynesian Multiplier shoes ny government spending brought about cycles of spending that increased employment and prosperity regardless of the form of the spending. (Investopedia 2017). If there is an extra expenditure on the government’s department, the initial increase of the expenditure will be multiplied by a multiplier that the overall expenditure is a multiple of the initial amout of expenditure. The multiplier, M, is determined bt the marginal propensity to save, tax and import.

, where S, T and M are the marginal propentisy to save, tax and import respectively (The Free Dictionary 2017) 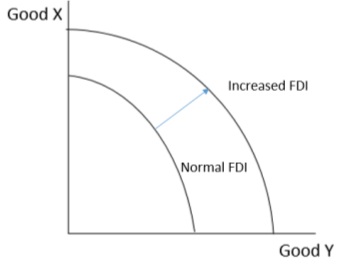 Furthermore, when minimum wages are increased in the productivity levels, demand of the goos and services both will go up as aggregand demand increase, as explained above. Investor then will be encouraged to invest in the tertiary industry, for example, IT, education and transport. This will then increase the foreign direct investment, FDI, which then will boost the growth and expansion of the economy (shown in diagram 3).

By looking through both side of the effect that minimum wage has, there are no solid conclusion that we can point out if minimum wage is either good or bad for the economy. Although minimum wage has a good impact on the economy, it is not a long-term solution to satisfy every workers. According to Adam Smith, worker suffer from money-illusion(Adam Smith Institute), as it is the real value of money, with no real nominal value that matter to them. The minimum wage will onlk keep the worker happy for a period of time.  The UK is a fast developing coutry, which means the the standard of living is constantly increasing. In order to compensate that, the minimum wage will also constantly increase alongside it, which will cause a problem in a long run economic point of view. So in conclusion, although minimum wage is able to solve the uemployment and inflation periodicly, it will cause a lot of other economic problems in the future, like de-growth. The government should use minimum wage as one of their policy to achieve better standard of living, but should never solely rely on it, sa in many economic situation, only using one solution will never solve the economical problem efficiently and completely.