Analysis Of National Income Of Qatar

Since 1939, Qatar has relied on the oil sector and was vulnerable to change in oil prices. Qatar’s growth was supplemented by natural gas sector with the discovery and exploitation of offshore North Field, the world’s largest natural gas deposit. The hydrocarbon sector is a major contributor to the National Income of Qatar. Oil and gas earnings revenue is expected to continue to be generated with the expansion of energy sector’s long term capacity. Qatar has opened its energy sector to international firms. There are gas reserves worth 910 trillion cubic feet and is expected to generate revenues for decades to come.

In order to diversify the economy, revenue from hydrocarbon sector is reinvested in major infrastructure projects, tourism, finance sector and develop other components of hydrocarbon sector. Past few years the growth has been moderate and there has been a shift to non-hydrocarbon sector based growth. Qatar’s banking system has maintained the credit growth observed from 2003 to 2008 due to favorable monetary policy, adequate capital and less non-performing loans.

Spending for the preparation of FIFA World Cup 2022 is expected to have a major impact on growth rate of Qatar. Qatar’s GDP growth rate could be boosted by the announcement of discovery of largest-ever natural gas deposit off Emirates coast

Import and Export of Qatar 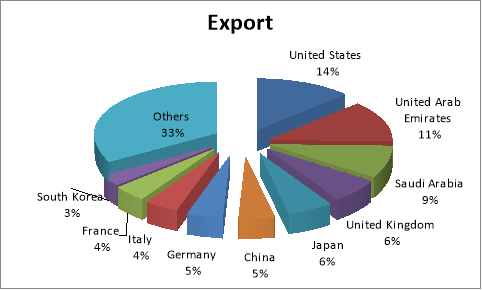 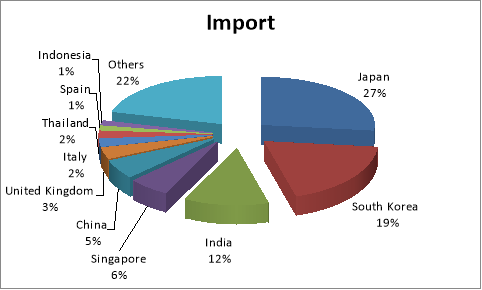 Revenue and Expenditure of Qatar

GDP is the sum of gross value added by resident producers plus any product taxes and minus any subsidies on products not included in the value of their output. GDP has increased consistently in last 10 years except 2009 when there was minor drop in GDP. Major contribution to GDP is from Industry sector followed by Service sector. The Industry sector comprises of Construction, Hydrocarbons and other industries like manufacturing and utilities. 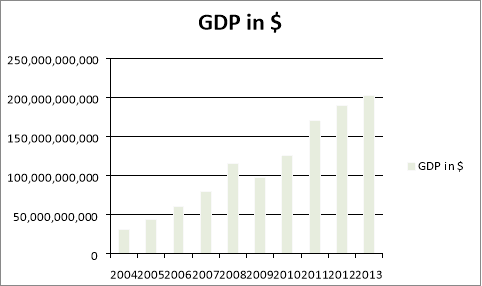 Sector-wise contribution to GDP (Nominal terms) in 2013 – Oil and gas mining sector is the major contributor to Nominal GDP with 119.8 billion US $. Construction and Banking related financials have contributed a share of 4.4 and 3.2 with 9.4 and 6.7 billion US $ respectively. 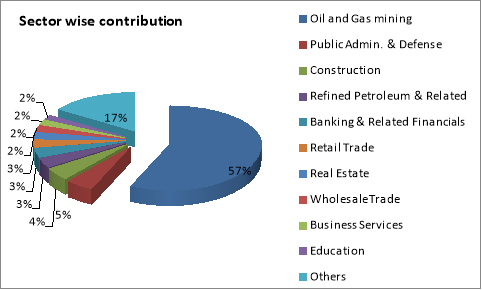 GNI is the Gross Domestic Product plus net receipts of primary income from foreign residents minus income by non-residents in the domestic economy. GNI has increased consistently in the last 10 years. 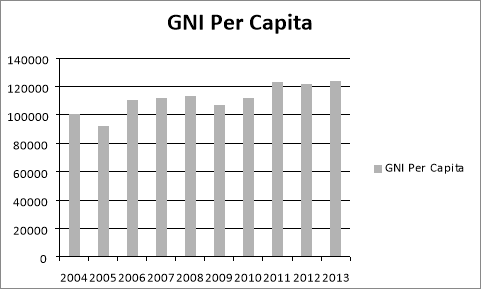 QSA released CPI in 2006 with base year 2002 and 1800 items in the basket from 400 suppliers. In June 2010 the base year was changed to 2007. Since 2009 QSA releases monthly CPI. CPI includes Food, Beverages & Tobacco, Clothing & Footwear, Rent, Furniture, Textile, Transportation and Communication and Entertainment etc.

Inflation peaked in June 2008 at all-time high of 15.1 % and a plummeted in December 2009 to record low of -4.9 % i.e deflation. 2-3 % of inflation (moderate) is desired by economies. Inflation plummeted in 2009 due to decrease in decrease in housing and food cost. An increase in inflation in recent years can be attributed to increasing demand for rental properties and increasing population has led to rising rents .Rents contribute 32% of CPI. Entertainment, recreation and culture which contribute to 11% of CPI index have also increased. Consumer price index touched 118 in July 2014.

FIFA World Cup 2022 games can lead to demand for large constructions and materials like concrete and steel. As demand increases price also increase. Preparations for World Cup include Construction of new city Lusail to host World Cup 2022, procurement of large metro network and major upgrade to Doha’s road construction. Government spending in FIFA World Cup 2022 along with influx of expatriate workers for the games could lead to inflation in near future. 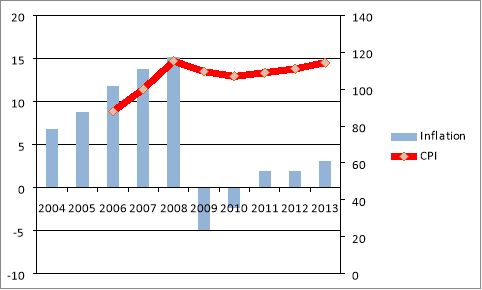 Labor force is growing rapidly. The private sector employs expatriates and Qatari citizen hold jobs in public sector. The Construction sector is the largest employer, employing more than 30% workforce. Other major employers are trade and domestic sector. In spite of its large contribution to GDP Oil and Gas sector utilize less than 10% of workforce. There was a salary increment in Public sector in 2011 and 2012 which has an impact on National Income. 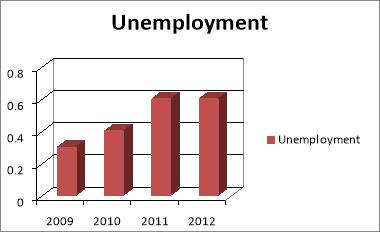 Qatar was one of the world’s largest fastest growing economies during the period of 2006 to 2012 driven by Hydrocarbon sector. The growth rate has decelerated in 2012 and 2013 due to temporary prohibition on LNG. As a result of government’s freeze on additional gas development projects in North Field until 2015, extraction of gas reached full capacity. The Hydrocarbon sector growth has reduced and hence its contribution to GDP growth has taken a hit. The Non-Hydrocarbon sectors like Construction and finance have made major contribution to GDP growth. The real GDP % change was 6.2% in 2012 and 5.6% in 2013.

Qatar’s growth rate has increased to 6.2 % in Q1 of 2014 contributed by ‘building and construction ‘ and financial services sector. The national income could be affected by factors like decreasing price of oil, increasing productivity of labor, non-hydrocarbon economy including construction, increasing population etc. 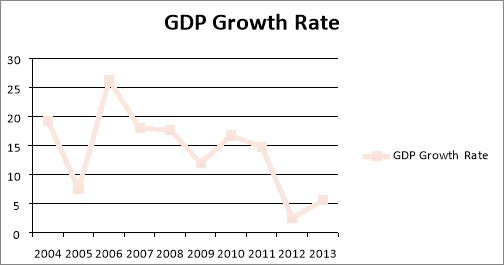 All monetary transactions at specific period of time is monitored using balance of payment. It is calculated quarterly and yearly. There are Financial, Capital and Current account. Qatar has trade surplus indicating low capita