Why did Mancur Olson conclude that only institutions matter for long-run growth? How far do you agree with him?

According to Olson (1996), the large difference in per capita income can be explained through various reasons. These reasons are the differences in terms of access to the world’s stock of productive knowledge , the ratio of population to land or natural resources, the quality of marketable human capital or personal culture, economic policy and lastly institutions (Olson, 1996).

Olson (1996) concluded that access to productive knowledge does not matter to long-run growth. It is because the cost outweighs the economic contribution earned by the foreign owners of production knowledge from economic growth (Olson, 1996). Besides the cost, it would be extremely challenging to explain the differences in per capita income across countries in terms of differential access to the available stock of productive knowledge (Olson, 1996).

The next factor is the differences in the ratio of population to land or natural resources. Ireland experienced a large proportion of outmigration and it did not experience rapid growth of per capita income (Olson, 1996). Thus, poverty is not due to overpopulation. The differences in human capital cannot explain the increase in wage because the immigrants from Ireland earned the same amount as other people. Hence, the ratio of land to labour does not determine the difference in per capita income (Olson, 1996).

Nowadays the economic activity does not need to be situated with the raw materials and land. Raw materials do not need to be situated in Silicon Valley for the manufacture of computers (Olson, 1996). Even based on observation, it is evident that Singapore’s success is not based on their natural resources. Therefore it shows that natural resources does not account for variations in per capita income.

The reason for dismissing culture is because culture is too broad which does not allow it to be compared with other factors in an aggregate production function (Olson,1996).

The human capital in terms of knowledge obtained about the public policy are not marketable thus acquiring this knowledge does not have an impact on income. This shows that human capital does not affect long term growth (Olson,1996)

Therefore by using the elimination process, Olson concluded that only institutions matter for long-run growth. Institutions are the reason for large differences in per capita income mainly because it will prevent countries from achieving their maximum potential hindering the country’s long-run growth (Olson, 1996).

Firstly, the country is not generating a socially efficient outcome because they are not earning the maximum amount of economic contribution from their natural resources. It is because of their institution arrangements which includes: the legal systems that enforce contracts and protect property rights and on political structures, constitutional provisions and the extent of special interest lobbies and cartel (Olson, 1996).

Secondly, the lack of proper institutions will discourage foreign investors and firms. They will felt that lending to these countries is highly risky and decrease their investment. This will lower foreign direct investment (FDI) in the country (Olson, 1996). Hence the decrease in FDI will keep the country from earning more income, which will affect its long-run growth.

I agree to a large extent because there are numerous reasons to prove institutions matter for long-run growth. Institutions can be separated into two categories economic and political institutions.

Economic institutions are important because they influence the structure of economic incentives in the society such as well-defined property rights (Acemoglu & Johnson et al., 2004). Property rights refer to “an owner’s right to use a good or asset for consumption or income generation” (Besley & Ghatak, 2009).

There are several negative impacts on the country’s growth due insecure property rights.

Firstly, it is because of the inverse relationship between τ (expropriation risk) and productivity. τ is the fear that someone will take away a portion of his or her gain (Besley & Ghatak, 2009). (Appendix A) shows that labor supply, output and consumption are decreasing in τ. The bigger τ, the higher probability the producer will lose his output. This will decrease his incentive to produce thus lowering productivity (Besley & Ghatak, 2009). From the diagram below there is a positive correlation between protection against risk expropriation and income level (Acemoglu & Johnson et al., 2004). Therefore with improved property rights by lowering τ, it will increase efficiency and income. These factors will affect the long- run growth (Besley & Ghatak, 2009). 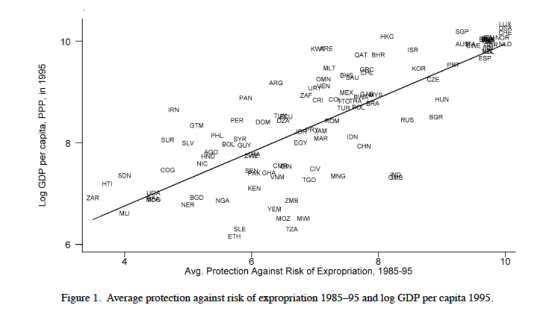 Well-defined property rights will increase the incentive to invest . An example would be investment in property in Peru tends to increase nine folds when squatters obtained formalized. (De Soto & O, 1996).

Other than influencing investment, insecure property rights lead to additional cost to defend their property also known as guard labor (e2). Firstly, an increase in τ will lead to a decrease in productive labor (e1). Secondly, the increase in τ will lead to an increase in e2. This shows that productive and guard labors are complementary. The more effort exerted to protect property rights will raise the expected marginal returns from efforts to produce more output (Appendix B).

The next effect is the use of property in supporting other transactions in the credit market. In the credit market, there is a problem of asymmetry of information. One way to deal with this problem is that borrowers are asked to put up collateral (Besley & Ghatak, 2009).

Therefore weak institutions which will lead to poor property rights it will affect the long-run growth by reducing productivity, discouraging investment, hindering access to financial market, making the country stuck in a poverty trap, and wasting labour resources.

Besides having proper economic institutions, it is crucial to have a proper institution in order for the country to experience long-run growth. Proper Political institution includes having the enforcement of law (Acemoglu & Johnson et al., 2004).

If the country does not have a political institution that enforces proper law, the country will not experience long-run growth because of corruption. In an environment where the rule of law is weak, the country will be plagued with inefficiency. The diagram below shows that there is a strong positive correlation between rule of law and productivity (Weil, 2005). This can be further illustrated from the example of corruption in Pakistan due to weak institutions. 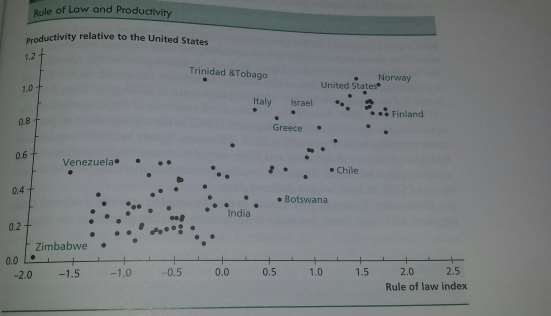 There is a negative relationship between corruption and Gross Domestic Product (GDP) (Detzer, 2010). Therefore this accounts for the large differences in per capita affecting the long-run growth.

In Pakistan, Corruption is perceived to be widespread (E.V, 2013). Judiciary in Pakistan is known to be corrupted. U4 (2013), states that 96 percent of the people who came in contact with the judiciary will face corruption while the other 44 percent confessed that they bribed the official. Corruption affected the general community because businesses generally lack confidence in the capacity of the judiciary to enforce law and order and proper verdict. The settlements of disputes are often settled through paying of bribes. An example would be, the judiciary takes an average of 880 days to settle a business dispute at a cost of 24 percent of the claim (U4, 2013).

From the figure below, the reason for corruption is because of the weak institutions. Since corruption and GDP have a negative relationship, the decrease in corruption will increase the GDP in the country. Therefore in order for a country to experience long- term growth, they must have proper institutions to enforce proper law to reduce corruption 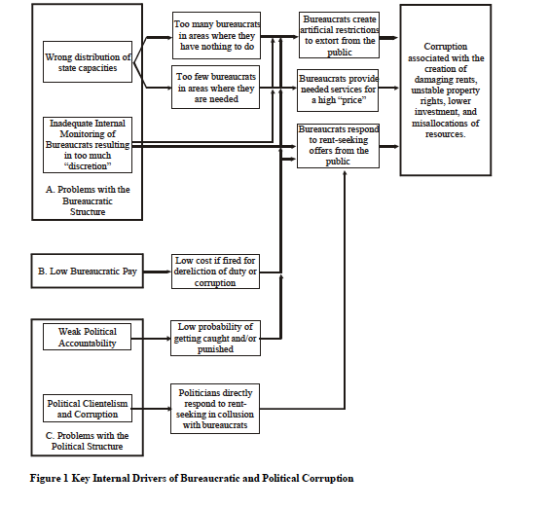 However I agree to a small extent because there is the need for human and physical capital accumulation to start the process. (Glaeser & La Porta et al., 2004). 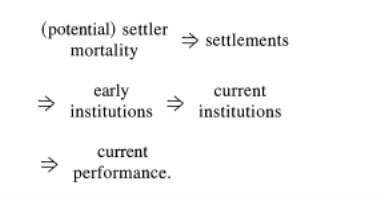 Besides history proving that institutions does not matter , Mancur Olson left out geography. Geography is the role of “ nature” that is on the physical and geographical environment (Rodrik & Subramanian et al., 2004). It has a role to play in influencing growth because it has a direct effect on per capita income which can be seen from the diagram below. 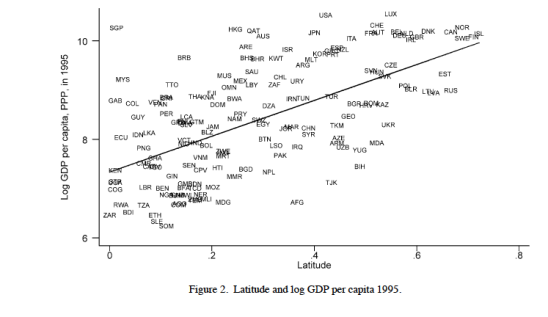 There are three effects in which geography can affect long-run growth. The first effect it that the climate plays a role in affecting the productivity of work, which in turn affects their income level (Marshall,1890). It is because the warm climate makes people lazy thus unproductive (Acemoglu &Johnson et al., 2004).

The next mechanism is geography may determine the technology, which is available to the society in terms of agriculture. (Myrdal, 1968). This can be shown through the start of the era of modern economic growth because the temperate zone technologies were more productive than tropical- zone technologies (Sachs, 2001).

Therefore geography will affect the economic performance of the country, which affects the long-run growth of a country.

In conclusion, Mancur Olson used the elimination process to conclude that only long-run growth matters. I agree to a large extent because in the absence of secure property rights it will affect the productivity of the country, access to financial market , waste resources and make the country remain in a poverty trap. All these effects will affect the long-run growth of a country.

Besides the lack of well-defined property rights, the country will face corruption in the absence of proper enforcement of law. The increase in corruption will decrease GDP thus affecting the long-run growth.

However I agree to a small extent because there is a need for human and physical capital accumulation in order fro growth to occur. I feel that democracy and other institutional improvements as a consequence of increased education and not a cause. The success of China was because of the dictator’s decision and history showed that it was because of Europe settlers that brought about the good institutions. The last reason is because He left out geography, which has a direct impact on income.

1.Olson, M. (1996). Distinguished lecture on economics in government: big bills left on the sidewalk: why some nations are rich, and others poor.The Journal Of Economic Perspectives, pp. 3–24.

10.Rodrik, D., Subramanian, A. & Trebbi, F. (2004). Institutions rule: the primacy of institutions over geography and integration in economic development.Journal Of Economic Growth, 9 pp. 131-165. 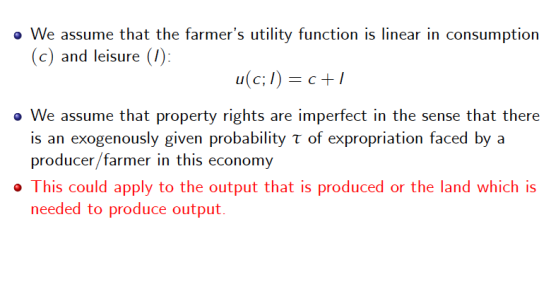 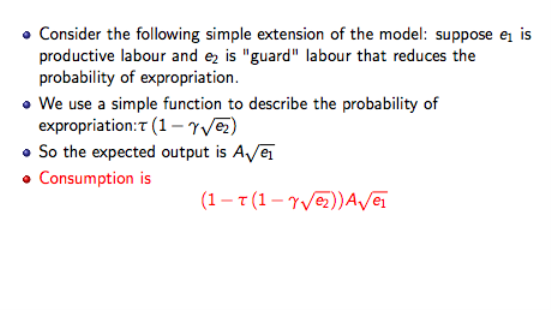 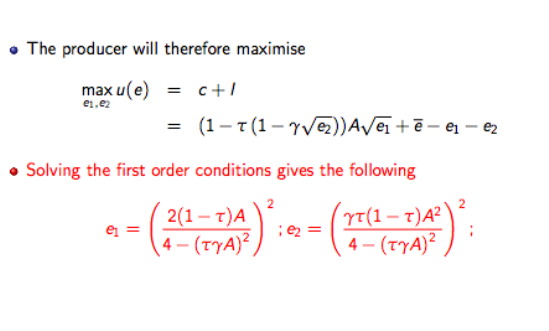