Explain which consultant/s is/are factually true and who is offering the correct advice?

Explain your answers by drawing the relevant diagram/s.

Solution: In the figure below, note that at quantity Q1, AC> Price, (point ‘a’ is above point ‘b’) so the firm is making a loss. Loosely speaking, therefore the first consultant could be said to be correct that the firm is losing money on every unit that it produces.

At Q1, however the price is greater than MC (point ‘b’ is greater than point ‘c’), thus, the second consultant is correct that if the firm sells some additional units, the price will more than cover your increase in costs. 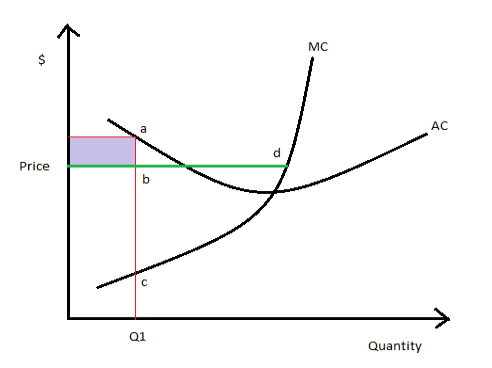 The diagram above shows that it is the second consultant who is correct. To make profit the firm should produce until Price (P) = MC which means producing until point d. If the firm does this then the losses will turn into profits.

Competitive forces in the market ensure that today’s big firms will not remain market leaders always.

History of Yahoo and Google

Yahoo!: Yahoo was created in 1994 with an earlier name of “Jerry and David’s guide to the World Wide Web”. The site was a directory organized to work as a searchable index of other websites and pages. Later the name was changed to Yahoo! (Yet another Hierarchically Organised Oracle). Yahoo grew rapidly in 90’s and the stocks were skyrocketing.

Google: Google was founded in 1998(4 years later than Yahoo). Google was launched as a search engine to look for other websites over the internet, which later grew drastically with various product lines added to it.

Comparison of Yahoo and Google

Revenue (in billions) generated by Google and Yahoo in the time period of 2005-2012 is as follows: 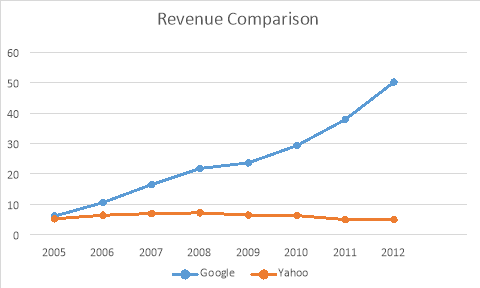 Some of the major innovations or decisions that played an important role in the above observations are noted down:-

The list of Valero’s giving is long. For 2012, direct donations from the Valero Foundation totaled $13 million, while the 2012 Valero Texas Open/Benefit for Children raised $9 million. Employee and company contributions to the United Way last year came to $11.6 million.

Part III (each question is for 10 marks, answer any one question)

Fill in the missing numbers in the table, assuming that Carrie can charge 5 cents per black-and-white copy.

Solution: The table would be as seen below:

Ans b) If the Lease increases by $50 per month the fixed cost per month rises by $50 which then decreases the profit by $50 making the business unfit for photocopies up to 6000 nos. In this case she would rather not renew her license. This can be understood from the table below: