A Government Budget is an administration report introducing the government’s proposed incomes and spending for a financial year that is regularly passed by the assembly, affirmed by the president and exhibited by the Finance Minister to the country. (4) The purpose of this project is to compare the Finnish government budget from the years 2013 and 2014, analyse them and evaluate if the latest budget has managed to stabilise the national economy.

GDP, gross-domestic product, is a tool for measuring national production. It can be measured in three ways – by production approach, income approach, and expenditure approach (Y = C + I + G + (X − M)). However, the GDP doesn’t take a stance on measuring wealth, volunteer services, or how beneficial or harmful the production is or has been to the economy, environment or nation. The gross-domestic product visualises the size of the national production and hence is a good tool for understanding, analysing, planning and controlling the economy. In this assignment, we will be looking at GDP as a measurement tool in stabilising the national economy.

Finland has a highly industrialised, mixed economy with a ‘per capita’ output equal to that of other western economies such as France, Germany, Sweden or the United Kingdom. The largest sector of the economy is services at 66 percent, followed by manufacturing and refining at 31.4 percent. Primary production is 2.9 percent.

With respect to foreign trade, the key economic sector is manufacturing. The largest industries are electronics (21.6 percent), machinery, vehicles and other engineered metal products (21.1 percent), forest industry (13.1 percent), and chemicals (10.9 percent). Finland has timber and several mineral and freshwater resources. Forestry, paper factories, and the agricultural sector (on which taxpayers spend around 2 billion euros annually) are politically sensitive to rural residents. The capital region generates around a third of the GDP.

Finland is highly integrated in the global economy, and international trade makes a third of the annual GDP. Exports within The European Union make up to 60 percent of the total trade. The largest trade flows are with Germany, Russia, Sweden, the United Kingdom, the United States, Netherlands and China. Trade policy is managed by the European Union, where Finland has traditionally been among the free trade supporters. Finland has been ranked on third place in the Global Competitiveness Index (GCI) 2013-2014 and tops the sub-rankings related to education. This has helped the economy to become the most innovative of the world (GCI). High firm competitiveness has also led to a balanced international creditor position. (1)

Finland’s income is generated by the approximately 1.8 million private sector workers, who make an average 25.1 euros per hour.

The middle income worker’s tax wedge is 46 % and effective marginal tax rates are very high. Value-added tax is 24% for most items. Capital gains tax is 28% and corporate tax is 26%, which is about the EU median. (1)

The population ages rapidly, while labour mobility is hampered and structural unemployment high. Finland’s export market share is briskly deteriorating due to falling structural demand for some of its main products and lost global (price) competitiveness. Part of the production has moved abroad

State and municipal politicians have struggled to cut their consumption, which is very high at 58 % in comparison to GDP. Much of the taxes are spent on public sector employees, many of which are jobs-for-life and amount to 550 000 state and municipal employees, which makes 10% of the whole population in Finland. (1)

Finland’s institutions belong to those best performing in the world. Public institutions function well and are thoroughly transparent. Moreover, government officials tend to respond adequately to risks and are often able to find multi-party consensus on difficult reforms.

Finland has been a part of Eurozone recession in recent years. It was estimated that the current recession would end in 2013 but the growth would remain slow. The reason for the low growth lies in financial and debt crisis. The work output is not growing, structural change has affected existing production capacity and the amount of new investments is low. This chapter focuses on the details budget changes between 2013 and 2014.

The Finnish GDP was 210 billion euros in 2013 referring to chart 1. In 2013, the prediction of the decrease in GDP volume is 0.5 %. The decrease in the outcome is due to decreasing investment and export rates. In budget of year 2014 the total output increased by 1.2% by domestic consumption and export. This was mainly due to gradual recovery of the Eurozone. Real GDP growth differs and can be seen from chart 2. (3)

Revenues and detailed budgets per sector can be seen in following figures 2 and 3. 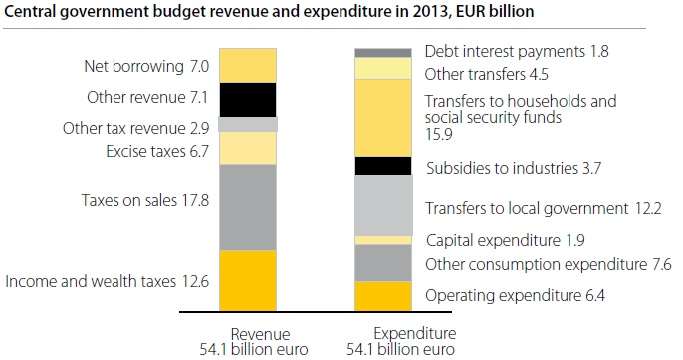 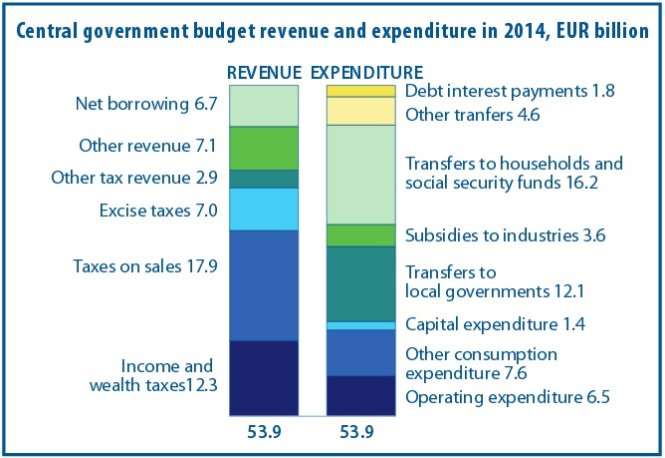 As referred to the comparison of the 2013 and 2014 budgets, there is a decrease of 200 million € in the budget of 2014. The government is trying to stabilise the economy by increasing revenue from taxes and selling stocks. There has been a main increase in budgeting in the sectors of health and society together with foreign affairs. Budget has been decreased for most of the sectors. Notable change is that the budget for the president has been cut with more than 3 million.

Corporate income tax reform was implemented in 2014 together with divided taxation to support economic growth, employment and entrepreneurship. Corporate income tax was lowered 4.5% to 20%. It was estimated that the lowering of the corporate tax rate, reduces central government’s imputed tax revenue by 870 million euros. By lowering the corporate income tax rate the economic growth was estimated to be boosted and as a consequence tax base will be expanded. Also it helps the Finnish production to stay in Finland rather than moving abroad for avoiding large taxes. Tax revenue loss is also compensated with removing and limiting tax subsidies. (3)

Dividend taxation was amended. Earlier 70% of dividend income was treated as taxable income and after amending the figure is 85%. For non-publicly listed companies the income will be taxed in full as capital income. Changes to dividend taxation are expected to increase central government tax revenue by approximately 200 million euros.

An essential part of increased tax revenue consists of increase in excise duties. It was estimated that increases in taxation of tobacco, alcoholic beverages and soft drinks will increase tax revenue by 230 million euros. Increases in taxation of electricity and transport fuels were estimated to increase central government tax revenue by 195 million euros. In addition, tax for old electricity power plants without carbon dioxide emissions was introduced. Power plant tax aims to collect 50 million tax revenues. (3)

Health insurance repayments are to be increased in 2013 to around EUR 4.9 billion. Government investment funds measures are controlled and will have a general impact of about EUR 143 million one year from now. The greatest sparing, EUR 103 million, identifies with repayments for restorative costs. Also, government consumption for health insurance pay will diminish all EUR 40 million, as the maintenance for travel costs will be raised.

EUR 28 million in assignments is proposed for ecological backing to vessel ventures, as a gift for a vessel to be finished in 2013, taking into account an approval given in 2010.29. Moreover, A total of EUR 27 million will be dispensed in 2013 for the procurement of another icebreaker.

Figure 4 shows the spending comparison in percentages of all tax revenues on public sectors. This section will inspect the spending in detail for the most significant sectors.

In the education sector, student grant is tied to an index starting from 1 August 2014 and the amount of the state guarantee for study loan per month is raised by 100 euros. Study loan deduction system is proposed to be replaced by a study loan credit system which encourages more effective completion of studies. In the upper secondary school and polytechnic, the immigrants will have a possibility to get student financial aid starting from fall 2014.

The Government aims to balance central government finances and to bring the government debt-to-GDP ratio into a downturn by the end of the parliamentary term. In order to achieve the goals, the Government has decided on measures decreasing expenditure and increasing revenue. The measures will be implemented gradually by 2015 and they will improve the central government’s financial standing by approximately 4.8 billion euros starting from 2017.

The measures include lowering corporate income tax rate, reform of divided income taxation, local government reform, social and health care service structure reform and housing policy reform. The measures also include increasing young people’s access to education and employment as well as employment of people with partial capability for working. The Government will assess the achievement of objectives annually. If central government debt relative to total output does not take a downturn, the Government has to commit further measures.

The income decrease is primarily due to the fact that the payments for rural development in 2014 are expected to be delayed during the first programme year. The income payments will be balanced out in coming years

The economic sanctions the European Union has set on Russia due to the conflict between Ukraine and Russia, the results of the slight collapse of the Russian economy is affecting the Finnish economy both directly and indirectly. Similar situation was seen during the collapse of Soviet Union in 1991, when the Finnish economy was even more dependant of its Eastern neighbour.

In 2014 total exports remained at the same level as the year before, while imports decreased by one per cent. According to the preliminary statistics the value of exports was 55.8 billion euros and the value of imports 57.6 billion euros. (1)

Binding expenditure ceilings set at the beginning of each administration’s four-year term prevent the government from running large deficits. Government debt is relatively low, borrowing is based on long-term bonds, bond yields are very low and net public assets are very large. Despite the depression in the western countries, there has been a positive trend in growing consumer confidence during 2014. Inflation rates continued its dropping trend, as on 2013 it was 2.2 % and 2014 1.7 %. Still, wages and salaries grew by 1.3 % the same year. (4)

For the first time in three years, the GDP increased on 2014. It can be said that there has been a turn for better in planning and controlling the economy via the government budget.