“Traffic congestion and pollution are negative externalities caused by various factors. A 2005 American study stated that there are seven root causes of congestion, and gives the following summary of their contributions: bottlenecks 40%, traffic incidents 25%, bad weather 15%, work zones 10%, poor signal timing 5%, and special events/other 5%.” https://en.wikipedia.org/wiki/Transport_economics. Government intervention will be necessary to some extent to fix this market failure. Congestion pricing is considered to be an appropriate mechanism to deal with this problem.

Problems caused by pollution and congestion:

The congestion on the roads of Manchester could cause the productivity of businesses to decrease, as many workers would get late to work due to the amount of traffic which would increase the amount of time it would take to get there. The fact that it would take longer to get to work because of the traffic, some workers may have to wake up earlier than they would if there was less congestion on the roads meaning they would have to sacrifice some of their crucial sleep and would not be able to reach their maximum productivity or not be able to maintain it for as long. Time also has a monetary value. It costs the UK economy over £20 billion a year in lost output and wasted time.

With congestion comes the increase chance of accidents. There is a higher probability that an accident could occur as it only takes one mistake in a car to crash and with more people on the roads, there are more people that could make that mistake. With a higher amount of car accidents, the cost incurred is higher as there are more vehicles that need to be repaired and more needs to be paid by insurance companies which will increase the price of getting insurance. If insurance prices increase, people will have less disposable income to spend on other things to maximise their utility.

The compounds released by the diesel cars can react to form acid rain. Acid rain can be extremely harmful to some ecosystems such as fish, plants, water or soil. At pH 5, most fish eggs cannot hatch. At lower pH levels, some adult fish die. Some acidic lakes have no fish. Even if a species of fish or animal can tolerate moderately acidic water, the animals or plants it eats might not. This heavily impacts industries such as the commercial and sports fishing industries, meaning that less fish will be able to be sold and will also deplete the food supply.

Acid rain also affects some buildings and bridges and speeds up the deterioration of them, including limestone statues and some metals including bronze, copper, zinc and nickel. This can be dangerous as these bridges may be destroyed which could, in some cases, destroy some lives. The decline of these buildings, statues and bridges can cost the government a massive amount in maintenance and repair costs.

Pollution is a negative externality in consumption. This means that a third party will suffer due to the products of the economic transaction. In this case, the producer (a car manufacturer) would sell the car to a consumer and when the consumer would use the car it would emit many poisonous gases from the exhaust pipes into the atmosphere. A third party (a person walking down the street) would inhale the polluted air affecting them in a negative way. The indirect costs include decreased quality of life, say in the case of a home owner near a smokestack and higher health care costs to treat things such as asthma or lung cancer. 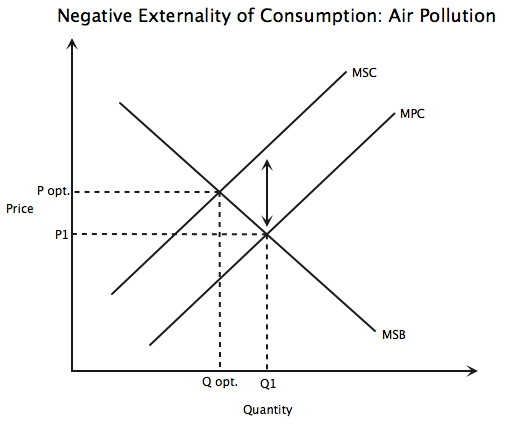 The diagram above shows the effects of the negative externality, in this case pollution. Social costs grow with the level of pollution, which increases with production levels, so at the point P1, Q1, cars are being overproduced as only private costs are considered in decisions. The minimization of social costs would lead to lower production levels. However, in this case the increase in price in cars caused by the government charging diesel cars to enter Manchester would move the price to P opt. and the quantity to Q opt. At this point, due to the price increase the Quantity would decrease as less people would be willing to spend the extra money to enter Manchester using a diesel vehicle creating a Social Equilibrium and stopping the overconsumption of cars. As the social costs are now being taken into account, less people are using diesel vehicles so the pollution would also decrease.

Charging diesel cars for entering Manchester is a good way to raise government finance which could be used to fund other parts of the economy which have market failures such as inequality or reduce other taxes such as the lower brackets of income tax which would help the poor. With the additional funds that this policy would bring in for the government more could be spent on public transport which would also increase the amount of people who would use it, further reducing the amount of congestion and pollution on the roads.

However, charging only diesel vehicles to enter Manchester has its own problems. People may decide to start to use petrol vehicles instead. This would not solve the pollution or congestion problem as petrol vehicles cause damage to the environment too. Although petrol cars do not damage the environment as much as diesel vehicles, they still release carbon emissions such as carbon dioxide and carbon monoxide that add to the depletion of the ozone layer.

Also, the demand for diesel vehicles such as cars are price inelastic. This means that when the price changes, the demand does not change as much. In this situation, even if the government charge diesel vehicles to enter Manchester, people will still enter Manchester with their cars not resolving the pollution or congestion problem but still increasing the amount people would have to pay. If demand is price inelastic, the government may try to force the consumption to decrease by charging prices that are too high meaning many poor people may not be able to afford the extra cost, while the rich will be unaffected increasing inequality.

There are other cities that have already undertaken these regulations trying to tackle the problems of congestion and pollution. “London has had air quality charging in place for some time. Its ‘low emissions zones’ already cover most of Greater London and charge between £100 and £200 a day on the most polluting lorries, motor caravans, large vans, buses and coaches. However from next April a new round-the-clock ‘ultra-low emissions zone’ will also be introduced in central London to cover all Class D vehicles From that point anyone with a more polluting diesel car – generally those registered before September 2015 – will have to pay £12.50 a day to drive into the centre of the capital. The introduction of clean air zones has been considerably easier for London than it would be for Greater Manchester, however, thanks to the underlying camera infrastructure brought in 15 years ago to operate its weekday congestion charge.”https://www.manchestereveningnews.co.uk/news/greater-manchester-news/how-would-clean-air-tax-15248346.

To some extent, charging diesel vehicles to enter Manchester is an effective solution as it would reduce pollution and congestion, therefore reducing the overconsumption of cars, reducing the effects of the negative externality. However, this policy also has its drawbacks. This policy may cost a high amount of money to implement properly and may drive poor people off the roads with their high charges. I do believe that the benefits outweigh the costs and the policy should be passed but the government should give the poor a subsidy/grant to buy a new less polluting car so that inequality is not increased as much.