Advantages And Disadvantages Of Free Trade

Free Trade is imports and exports of goods from countries without any tariff barriers being imposed.

Free trade allows prices to be lower for consumers so exports will be increased and there will be a greater choice and variety for the consumer.

There are advantages of free trade these are the economy will growth slower and the government will spend less money as they will not have to spend money and be able to spend it on other things.

Also there is disadvantages for example poorer working conditions for staff and the need to outsource the companies work load.

An absolute advantage is a nation that can produce services or products cheaper than another nation. As a result of inputs such as labour is cheaper and the levels of labour needed to provide these goods and services. An example of such as India has an absolute advantage in operating call centres compared to the Philippines because of low cost labour and the abundant labour force. (Investopedia, 2005)

International Trade is exchange of services and goods amongst varied countries and regions without any problems arising. It also provides a large part of the country’s gross domestic product and also is a valuable source of income for this country.

The gains from trading internationally are

This is when government intervenes with actions and policies that restricts or restrains international trade which is in the interest of protecting local businesses there are two different methods of protectionism tariffs which are tax that is imposed on goods when moved across a political boundary and quotas which limits the quality of goods imported during a period.

Is government restrictions on the free trade of services and products that is sold internationally using importing policies was is reflected by tariffs and other import charges.

WTO was founded in 1995 they account for 97 per cent of word trade and have set rules followed by its member. Examples of these rules are Anti-discrimination where they are not allowed to discriminate against countries and all the tariffs set are the same in all the countries in the EU and other countries. Another example of the rules is binding tariffs that cannot be changed without negotiations taking place with their trading partners.

On March 2002 when Bush was in power in America imposed tariffs on steel imports into the USA to protect the US steel industry. The EU and other countries reported this to the WTO and in December 2003 ruled that it was illegal for them to impose these tariffs and this allowed the EU and other countries to impose retaliatory tariffs on the US product. Shortly after the WTO made their decision, Bush announced that the steel tariffs would be abolished.

The role of the EU is to promote social,economic and political harmony between the different western countries. They help to stop economic conflict between countries as nations arte economically interdependent. Goals are pursued through the European market being united under a single currency.

There are 28 countries that belong to the EU with over 500 million citicens free to move and settle where they want to. Other roles that the EU has playe dis they created the single currency called the euro now a major currency and has made the European market even stronger.

The EU targets large humanitarian issues and development aid programs in the world and are looking to get Europe out of the current economic crisis for example fighting against climate change and the consequences this may have and salos helps neighbouring countires prepare themselves for EU membership.

These payments are a basic balance to help to dertermine long term trends in country’s balance of payments. The measure is not a sensitive to short tem fluctuations in the interest or exchange rates providing an insight for the long term, this will involve International investment fluctuations from capital account making iot more responsive to long term change I the nations productivity.

Examples of the balance of payments are:

To assess recent developments in the UK’s external position, Figure 1 breaks down the current account balance into its constituent parts – the trade balance, the primary income balance (which comprises of investment income, compensation of employees and other primary income), and the secondary income balance that captures transfers between the UK and other countries (for example official payments to and receipts from EU institutions and other international bodies). It shows that the UK has recorded a current account deficit every year since 1995. From 1998 to 2008 the deficit widened, peaking at 3.5% of nominal gross domestic product (GDP) in 2008. In subsequent years, the deficit narrowed slightly but widened thereafter. Latest figures show the current account deficit widening to 5.4% of nominal GDP in 2015, representing the largest deficit (in annual terms) since records began in 1948. This deterioration in performance can be partly attributed to the recent weakness in the primary income balance: due to UK earnings on assets overseas falling relative to the earnings of foreign investors in the UK. (see appendix 1) for more information (Statistics, 2016)

The UK manufactures an extensive choice of goods for export but also imports a massive quantity of food, electronics, energy and additional customer goods. Rendering to the government department for Business, Innovation and Skills between 1998 and 2008, product exports bred by nearly 100 per cent and product imports grew by 111.5%. The report declares that UK trade exports have been shifting towards high and medium high technology manufacturers, representing a change in trend in the past 10 years. Excluding slight dips around the years 1985, 1994 and every year since 2007, product exports, imports, services exports, imports and GDP have been increasing. The value of the import and export of products has steadily been over double the value of the import and export of services. Meanwhile 1994, the UK’s share of the worldwide import and export market has stayed steady, though fell slightly from around 5 % to around 3 %, about the similar level as France and Japan, above Russia and Brazil, below Germany and the USA and surpassed by China in 2004. Sterling fell intensely in 2007/08, but the Bank of England requested that this held up the exports of goods, with products from Britain costing less to overseas buyers as the rate of the pound was lower than usual. As mentioned earlier, the UK has shifted to higher technology manufactured goods, valued at around 250 billion USD in 2008, 150 billion USD higher than in 1990. This total is higher than the worldwide average. The last 10 years have seen a massive increase in exports to the BRIC countries (Brazil, Russia, India and China) and a minor increase in exports to France and Germany. Britain’s imports from China have tripled in the period between 2002 and 2007.

Gross Domestic Product (GDP) is a measure of the economic output produced by a country. Real GDP is GDP in real or constant price terms; that is, GDP adjusted for price changes.( Digital, 2015) as can be seen in appendix 2

An exchange rate if a countires country like the UK (the pound) can be exchanged for another countries currence ie America (the dollar).

A current account deficit should source the rate of the pound to fall. In this case, the value of importations into the UK is higher than the value of distributes traded to foreigners. Hereafter, the demand for overseas currencies to buy these importations is higher than the demand for the pound to buy our exports. This would suggest that the rate of the pound should fall. For a current account surplus, basically the opposite for the above explanation.

In the case of a deficit, the consequent lower rate of the pound will make exports inexpensive and imports moderately more expensive. The value of exports retailed should rise and the rate of imports bought should fall. The deficit should be eradicated automatically (again, the opposite of the explanation for a surplus).

(i) Conflict with other objectives.

(iii) Joining at the Wrong Rate.

Figure 1: UK current account balance and constituent parts as a percentage of nominal GDP, 1995 to 2015 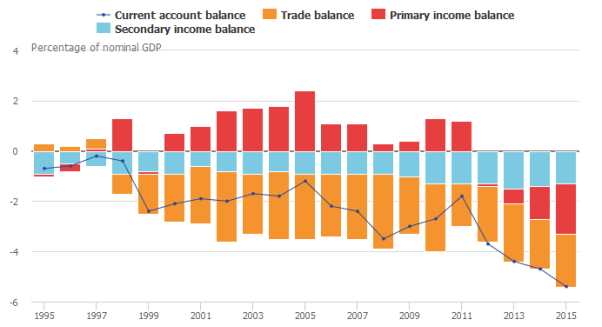 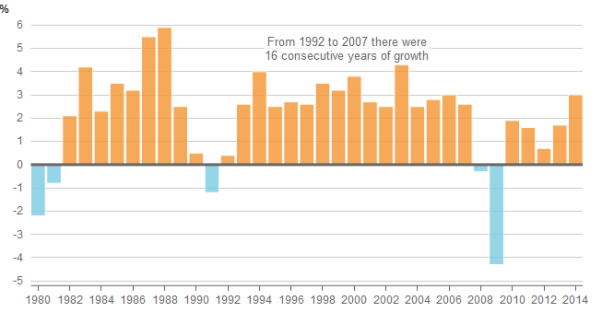 Real GDP in the UK has typically increased every year, although there have been three downturns in the economy since 1980. After the downturn in the early 1990s, the UK economy experienced sixteen consecutive years of growth before output fell in 2008 and 2009. From 2010, output has been growing again – regaining pre-downturn levels in the third quarter of 2013. Over the period 1980 to 2014, real GDP growth has averaged 2.2% per year. (Digital, 2015)

Investopedia. 2016. What is the difference between comparative advantage and absolute advantage? | Investopedia. [ONLINE] Available at: http://www.investopedia.com/ask/answers/033115/what-difference-between-comparative-advantage-and-absolute-advantage.asp. [Accessed 07 December 2016].